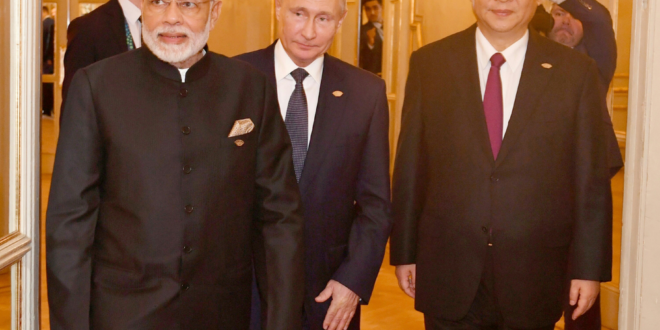 India tilts towards Russia in Ukraine fight at the UN

As the Ukraine crisis rages on, where is India’s voice? Until recently, it was mostly missing in action. But a vote on Tuesday at the United Nations Security Council (UNSC) on whether to hold an official session to discuss the crisis saw New Delhi tilting toward Moscow.

While Russia and China expectedly cast no votes, India (along with Kenya and Gabon) did not support the U.S.-led push for the meeting by abstaining. Since nine positive votes were needed in the 15-member Council to approve the meeting, India’s abstention was effectively a rejection of the U.S.-led argument. Far from being an isolated instance, this incident is part of a larger pattern in India’s actions that presents challenges to American neo-primacy.

India has just begun a two-year innings as a non-permanent member at the UNSC, where it was widely expected to work closely with the U.S.-led coalition and take on China. But matters have turned out rather differently. The latest UNSC vote comes on the heels of another, on climate security, in which India openly voted with Russia and against the United States. During that debate, New Delhi, Moscow, and Beijing collaborated closely on strategy, including offering an alternative resolution that challenged the core premises of the U.S.-led one.

Much has been written and said about the U.S.-India bonhomie by establishment-oriented analysts in Washington. But the uncomfortable fact remains that Washington’s arch-rival Moscow is also New Delhi’s age-old partner and friend, with deep interdependence and common interests in defense and energy trade and investment.

And Indo-Russian ties are, if anything, growing stronger. Vladimir Putin was received with open arms during his recent visit to New Delhi and important agreements were signed despite U.S. pressure. Prioritizing the Russian leader’s visit, India even put off a key U.S.-India dialogue between their respective foreign and defense ministers. In September, India also went ahead and took delivery from Russia of the cutting edge S-400 air defense system, disregarding veiled threats by U.S. officials of sanctions under the 2017 CAATSA law.

The Quincy Institute Brief on U.S.-India relations in March 2021 advocated that the United States minimize its risks to the broader relationship with India by, among other things, refraining from imposing counterproductive secondary sanctions under the CAATSA law. Other Washington-based analysts have since cautiously added their voice. But the Biden administration has not yet announced a decision on the matter.

President Biden has departed from Trump’s strategies in one important respect — his stress on alliances and partnerships, of which the deep links forged with India have been touted as a lynchpin. White House’s Asia Czar Kurt Cambell has been in rapture recently on what he sees as a “bullish” future with India. The Biden team, not without some justification, is banking on India as a key component of its strategy of neo-primacy with respect to China. India-China tensions have worsened greatly since their armed clash in 2020. India’s increased strategic ties with the United States, including its activities in and outside the Quad, have seen a qualitative shift from its historic stance of non-alignment.

But the Ukraine crisis is not the only sign of the new limits of the U.S.-India convergence. When Washington, Canberra, and London announced the formation of the explicitly military pact AUKUS, India sharply distanced itself from the move. India-China tensions continue to simmer, as evidenced most recently through their spat over the Olympics. While being strongly critical of China in bilateral settings, New Delhi has however also simultaneously limited the Quad’s anti-China push, stressing that the compact is for something and not against someone.

U.S.-India ties will and should remain strong and grow much stronger in non-military spheres, with their many common interests in energy, climate action, technology, and trade. But when the chips are down, Washington may discover that India will not only decidedly stay away from its coalition against Russia, but may not even be as hawkish on China as is widely assumed. There are part-parallels here with Southeast Asia, which similarly does not wish to pick sides when it comes to great power rivalries. Of course, bearing down hard on India on its strategic ties with Russia will only push New Delhi further away from Washington.

India’s domestic challenges show few signs of easing and its sharp rivalries with China and Pakistan pose an increasing threat on its land borders, far from the conflict-prone waters of the South China Sea. As I wrote in the immediate wake of the India-China Galwan clash in June 2020, it makes sense for India to tilt more towards Eurasia than the U.S. — and the Japan-constructed primacist geography called the “Indo-Pacific.” This remains true today, even if the United States decides to waive CAATSA sanctions against India.

In sum, India’s differentiated interests and the rapidly evolving geopolitics of the international system combine to not only end all the wishful speculation by Nikki Haley and others on an U.S.-India alliance, but may also increasingly limit the trajectory of their current strong partnership. Kurt Campbell and other neo-primacists should take note.

Post Views: 223
Previous Why I want to kill Biden’s massive US-Egyptian arms deal
Next The tragic US exit from Afghanistan was rooted in decades of failure