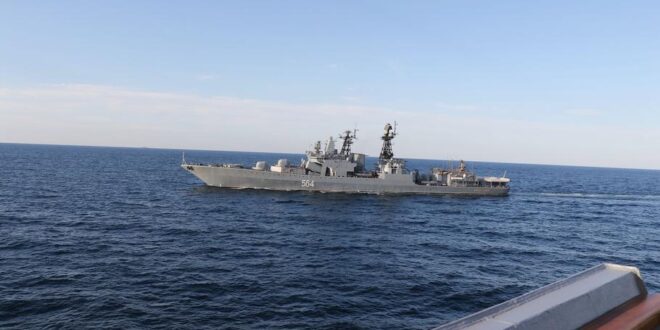 Russia is prepared to fire on foreign ships and submarines that illegally enter its territorial waters, according to a senior official quoted by an independent Russian news agency.

Any decision to attack would be taken only at the “highest level,” said Stanislav Gadzhimagomedov, deputy head of the main operational department of the General Staff, according to a Monday report by Reuters that cited the Interfax news agency.

The threat follows Russian claims that its forces detected a U.S. Navy Virginia-class submarine operating over the weekend near the Kuril Islands, north of Japan, where the Russian navy was conducting a military exercise.

Moscow said the U.S. submarine departed at high speed after Russian forces ordered it to surface. The U.S. denied the incident happened in Russian waters in a Saturday statement that stopped short of outright denying any encounter occurred.

The saber-rattling comes at a time of high tension between the two countries. NATO, including the United States, is warning that Russia, which has staged more than 100,000 troops near its border with Ukraine, could attack its neighbor within days.

“More chest thumping,” is how Ralph Cossa, president emeritus of the Pacific Forum think tank in Hawaii, described the threat to fire on trespassing vessels.

U.S. forces are “looking every day” at Russia, but they don’t need to trespass to do it, he said in a telephone interview Tuesday.

Cossa said satellites and long-range surveillance tools mean an incident such as the 1960 downing of a U-2 spy plane operated by the CIA over the Soviet Union, wouldn’t happen today.

The Russians have shown they will fire on inadvertent trespassers, Cossa said. He cited the Sept. 1, 1983, downing by a Sukhoi Su-15 fighter jet of a Korean Airlines passenger plane that strayed into Soviet airspace. All 269 people on board were killed.

Intelligence collectors normally stay 30-50 miles off the coast of countries they are surveilling, Cossa said.

“I don’t think there’s a need to penetrate into people’s territorial waters to see what’s going on,” he said.

The tension with Russia is related to the rise of China, which U.S. officials now talk about as the primary threat, Cossa said.

“That’s got to rub Putin the wrong way,” he said of the Russian president. “China threatens U.S. primacy, but it is not an existential threat to the U.S. Russia is. They want respect.”

Post Views: 97
Previous 101st Airborne soldiers are among additional 3,000 US troops deployed to Poland
Next No sign yet of Russian pullback from Ukraine border, NATO says