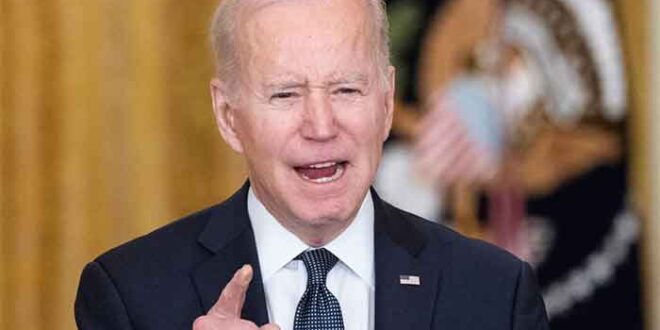 On Tuesday, the day before the United States had previously claimed Russia would launch a full-scale invasion of Ukraine, US President Joe Biden gave a speech in which he doubled down on his threats of a “bloody, destructive war” even though no Russian invasion was forthcoming.

Earlier in the day, the Russian government, which has insisted that it has no plans to attack Ukraine, announced that it is pulling back its troops from the Ukrainian border following the completion of a series of joint war games with Belarus.

On Monday, Ukrainian President Volodymyr Zelensky condemned the decision of the United States to relocate its embassy personnel. A source close to his party told Strana.ru that “countries are making up a story about war,” adding “we are being played with.” David Arakhamia, the head of Zlenesky’s “Servant of the People” faction in Kiev’s parliament, added, “Our intelligence does not see signs that the Russians are directly preparing.”

The claim of an “imminent” invasion of Ukraine has been repeated endlessly by the US government and parroted in the media. In his speech on Tuesday, Biden was compelled on the one hand to acknowledge the reality that no Russian attack had occurred, while doubling down on the United States’ threats.

Every part of Biden’s speech was filled with hypocrisy, lies and warmongering. Let us cite only a few passages.

Biden began his remarks by declaring:

“From the beginning of the crisis, I have been absolutely clear and consistent: The United States is prepared no matter what happens.”

Does “no matter what happens” include nuclear war? How, exactly, is the US “prepared” for that potential catastrophe? The use of the phrase, “No matter what happens” can only mean that Biden and his advisers have not thought through the possibly disastrous consequences of their provocative actions and threats.

After noting Russia’s withdrawal of military units from positions near the Ukrainian border, Biden responded not by seeking to further reduce tensions but by intensifying the war mongering of the United States. Biden said:

“We will not sacrifice basic principles. Nations have a right to sovereignty and territorial integrity. They have the freedom to set their own course and choose with whom they will associate.”

Since when has the sovereignty of other nations been the “basic principle” of the United States? Any effort to list the United States’ violation of other countries’ “sovereignty and territorial integrity” would be dozens of pages long. One need cite only the most egregious examples of the last quarter century:

• In 1992, following the dissolution of the Soviet Union, the United States and Germany recognized Croatia as an independent country, thus initiating the breakup of Yugoslavia and precipitating a bloody civil war that cost thousands of lives.

• In 1999 the United States led a 78 day bombing campaign to force Serbia to accept the secession of Kosovo. What had been a part of Serbia was turned into a mini-country with a government led by criminal drug lords.

• In 2003, the United States invaded Iraq based on false claims that the country was developing “weapons of mass destruction.” Over one million Iraqis were killed, and Iraqi president Saddam Hussein was hanged by US-backed militia forces. The United States and allied forces tortured and murdered thousands of prisoners, including in the infamous Abu Ghraib prison where US service members posed for photos while sexually humiliating detainees.

• In 2011, the United States armed Islamist terrorist forces who overthrew the Libyan government and tortured, sodomized, and murdered its president.

• Beginning in 2014 through the present, the United States armed and funded ISIS-linked terrorists in Syria fighting to overthrow the Syrian government, including the deployment of American troops on Syrian soil in violation of Syrian sovereignty. The United States’ arming of the terrorist forces was justified by the Democrats based on false claims that the Syrian government used chemical weapons against its population, while Trump declared that the US mission should be to “take the oil.”

• In 2019, The United States murdered Iranian general Qasem Soleimani at Baghdad International airport while he was undertaking an official diplomatic mission to the Iraqi government on behalf of the government of Iran.

And this is not to mention the Vietnam War, the Korean War, and the US sponsorship of countless Latin American dictatorships that collectively killed hundreds of thousands of left-wing workers and young people.

“The fact remains: Right now, Russia has more than 150,000 troops encircling Ukraine in Belarus and along Ukraine’s border.”

Four days ago, National Security Advisor Jake Sullivan declared that Russia “has amassed more than 100,000 troops on the border” with Ukraine. Where did those extra 50,000 troops come from in just four days? Who are they? Where are they? How did Russia manage to expand its troop presence around Ukraine by 50 percent while telling the world it was reducing its forces?

Not one voice in the American media asks these most basic questions, which would in an instant show the American claims to be pure nonsense.

How the United States views Russia is not a matter of opinion, however, but of public statements and documents.

In 2018, the United States adopted a national defense strategy declaring that “Inter-state strategic competition, not terrorism, is now the primary concern in US national security,” in which Russia was explicitly named, along with China, as a rival of the United States.

It is to this end that the United States has sought to militarily encircle Russia, massively expanding NATO to Russia’s doorstep.

As for the claim that the United States does not have “missiles” in Ukraine, this is at once a non-sequitur and a red herring. The United States has armed Ukraine with Javelin anti-tank missiles and, via Lithuania, with stinger antiaircraft missiles.

Presumably, Biden is referring to intermediate-range ballistic missiles, which were banned under the Intermediate-Range Nuclear Forces Treaty, with which the United States has declared it will not comply. Biden’s denial serves to distract attention from the United States’ ongoing effort to ring Russia with offensive missiles, to which end it has constructed Aegis ashore missile batteries in both Romania and Poland, which are capable of launching nuclear-armed tomahawk cruise missiles previously banned by the INF treaty.

After claiming that the US is “not a threat to Russia,” Biden proceeded to list a series of aggressive actions taken by the US and its NATO allies in Ukraine and Eastern Europe. This concluded with the statement:

In other words, Biden claimed that he will use the full military arsenal of the United States if a conflict breaks out between the Russia and one of the unstable statelets that emerged from the dissolution of the USSR.

Taken literally, Biden’s statement means that if war were to break out between Russia and one of these politically-unstable microstates, the United States will pledge to use nuclear weapons (the “full force of American power”) against Russia, which itself possesses a massive nuclear arsenal. This would mean the beginning of World War III, threatening the very future of human civilization.

Turning to the situation in the United States, Biden said that a conflict with Russia “will not be painless” for the American people. However, he insisted:

“This is a cause that unites Republicans and Democrats. And I want to thank the leaders and members of Congress of both parties who have forcefully spoken out in defense of our most basic, most bipartisan, most American principles.”

This combined both a truth and an outright lie. There is a “cause” that unites Republicans and Democrats, but it has nothing to do with “principles” such as “liberty” and the “right of people to determine their own futures,” as Biden claimed, but rather the ruthless geopolitical interests of the American ruling class, combined with a deep fear of the growth of social opposition within the United States.

For all Biden’s talk of “liberty” in Ukraine, just one year ago, US President Donald Trump attempted to overthrow the government of the United States and install himself as a Hitler-style dictator. Biden admitted this reality on July 13, 2021, when he declared, “There’s an unfolding assault taking place in America today, an attempt to suppress and subvert the right to vote and fair and free elections. An assault on democracy, an assault on liberty.”

Yet now Biden proposes “unity” with those who launched an “assault on liberty” in the name of …. Defending liberty and American principles!

Informed of what? The outbreak of war between the US and Russia? The launching of nuclear weapons? The beginning of World War III? The breakdown of US democracy is so advanced that the president believes that he only has to keep the American people “informed” of decisions that will impact the population of the entire planet.

Biden is free to make a speech filled with lies and blood-curdling threats because he knows that no one in the media will seriously question his claims, premises or assertions. The entire political establishment is fully committed to the doctrine of “great power competition.”

If this is Biden’s “peace” speech, then what is the war speech? The most fundamental conclusion that is to be drawn from Biden’s speech is that the United States is desperately searching for a military conflict to project its internal social, economic, and political crisis outwards. American capitalism is on the warpath.

Post Views: 254
Previous Poland’s Democratic Erosion Is as Worrying as Its Border Crisis
Next What Russia Wants