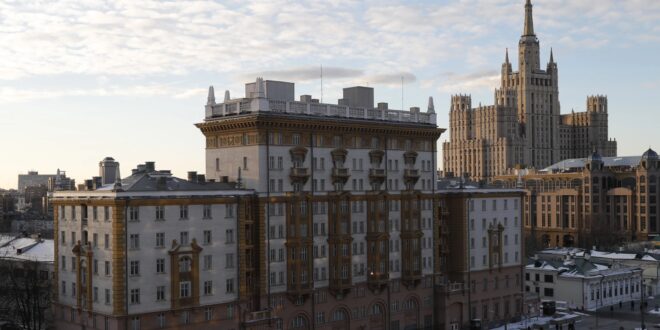 Russia has expelled the second-most senior American diplomat at the U.S. Embassy in Moscow as tensions between the two countries continue to rise over a possible Russian invasion of Ukraine, the State Department said Thursday.

“We call on Russia to end its baseless expulsions of U.S. diplomats and staff and to work productively to rebuild our missions,” the spokesman added. “Now more than ever, it is critical that our countries have the necessary diplomatic personnel in place to facilitate communication between our governments.”

The expulsion comes as President Biden said Thursday that he believes Russia could invade Ukraine in the next several days despite Russian officials’ claims that the country would be withdrawing an unspecified number of troops from the Ukrainian border following the completion of military exercises on Tuesday.

Officials in Ukraine and the West remain unconvinced that the move represents a sign that Russia will not move forward with a military incursion into its western neighbor. U.S. officials said Wednesday that intelligence shows 7,000 more Russian soldiers had actually arrived on the Ukrainian border.

“Every indication that we have is that they are prepared to go into Ukraine, attack Ukraine,” Biden said.

“My sense is it will happen within the next several days,” he added.

Meanwhile, NATO Secretary General Jens Stoltenberg said Thursday that “despite Moscow’s claims, we have seen no sign of withdrawal or de-escalation so far.”

“On the contrary, Russia’s build-up appears to continue,” Stoltenberg continued.

Post Views: 88
Previous Australia To Designate All of Hamas as a Terror Organization
Next Putin Cannot Erase Ukraine