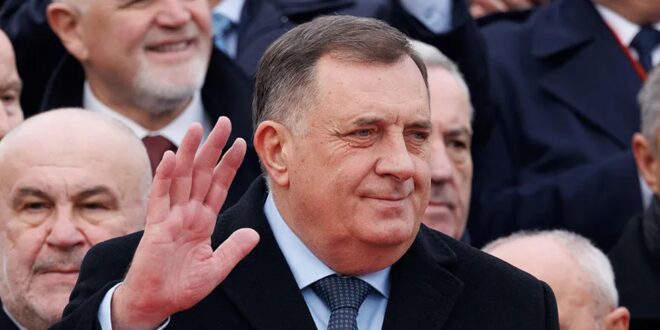 How the UK Should Respond to the Bosnia Crisis

With efforts by Bosnian Serb separatists to trigger a secession gathering pace, the UK has several options to help maintain peace in the country.

As the crisis in Bosnia enters its seventh month, tensions continue to flare in this corner of Europe. What began as a boycott of state-level institutions by Bosnian Serb politicians last July has turned into the worst security crisis since 1995. The boycott was a direct retaliation to the decision of the outgoing High Representative Valentin Inzko – the top international peace envoy – to impose a genocide denial ban. Bosnian Serb leaders quickly turned the boycott into a process that aims to effectively dismember the country’s sovereignty. A controversial special session of the Republika Srpska assembly held last December laid out the roadmap to a de facto secession. This is nothing less than an existential threat to Bosnia.

The secession process is led by Bosnian Serb leader Milorad Dodik, who is a member of the country’s tripartite presidency and is the undisputed leader of the Republika Srpska entity. Dodik has dominated political life in Republika Srpska for the past 15 years, and is now holding Bosnia hostage to his separatist ambitions. He is attempting to undo the processes of state-building and peacebuilding undertaken in the country since the signing of the Dayton Peace Accords. Left unchecked, Dodik will continue to tear the country apart and seek to carve out a statelet of his own. His own public statements about secession are remarkably candid expressions of his ultimate intentions.

Despite Dodik’s direct assault on Bosnian institutions and – by extension – peace in the country, international reaction has been both slow and insufficient. In early January, the Biden administration finally slapped sanctions on Dodik and media outlet ATV ‘in response to Dodik’s corrupt activities and continued threats to the stability and territorial integrity of BiH’. Dodik, who was previously placed under US sanctions in 2017, remained defiant as he celebrated the newest round of sanctions with his closest circle.

Unlike the US measures, the EU’s response has been characteristically underwhelming, reflecting both internal divisions and a lack of resolve. Over the past several months, Dodik’s ever-closer relations with like-minded illiberal autocrats such as Hungary’s Viktor Orbán and Slovenia’s Janez Janša have paid off. It is all but certain that the EU will not be able to speak with one voice in deterring Dodik.

Now, as the crisis deepens, the eyes of many Bosnians are not on Brussels but on Washington and London. The British response to the ongoing crisis in Bosnia has been reassuring. Air Chief Marshal Sir Stuart Peach was appointed as the prime minister’s Special Envoy to the Western Balkans in December. The House of Lords debated the importance of Bosnia’s territorial integrity last month, and the UK Foreign Affairs Committee held a formal meeting on Bosnia recently.

The current British support for Bosnia is a far cry from John Major’s policy during the 1990s, which University of Cambridge Professor Brendan Simms characterised as Britain’s ‘unfinest hour’. Today, the UK is well-positioned to implement a set of measures aimed at countering the rising instability in Bosnia.
What Should the UK Do?

In line with the objectives set out in the Integrated Review, London should make it ‘more difficult and costly for malign actors’ to undermine peace in Bosnia, and should respond with measures to ‘tackle conflict and instability’.

There are five specific steps that London should take.

First, the UK and the US should lead NATO in redeploying to Bosnia. The escalating situation warrants a determined response with boots on the ground. The NATO presence in Bosnia was the key factor that ensured peace in the post-war period, and a similar presence now would help promote stability.

The UK could initiate the deployment of an Enhanced Forward Presence-type mission to Bosnia. The presence of US and British troops in Sarajevo and Tuzla would send a clear signal about the Western commitment to peace in Bosnia.

Second, the UK should impose sanctions on Bosnian Serb separatist leaders who are undermining the Dayton Peace Accords. The Bosnia and Herzegovina (Sanctions) (EU Exit) Regulations 2020 aim to ‘promote respect for the sovereignty, territorial integrity, international personality and constitutional order of Bosnia and Herzegovina’ and to ‘encourage compliance with, and the implementation of, the General Framework Agreement for Peace in Bosnia and Herzegovina’.

The Foreign, Commonwealth and Development Office (FCDO) should work on putting together a sanctions package. Sanctions should be imposed on Dodik, his close associates, and politicians in the executive and the legislature involved in leading and/or facilitating the secession process. Furthermore, business entities and media outlets supporting secession should also be designated.

Third, the UK should follow the US lead in imposing sanctions on high-profile corrupt politicians of all stripes in Bosnia pursuant to the Global Anti-Corruption Sanctions Regulations 2021. The designation of a dozen politicians engaged in corrupt practices is a low-cost response to the endemic corruption undermining the functioning of Bosnia.

Fourth, the UK should take steps to prevent the current separatist ruling elite in Republika Srpska from accessing the London Stock Exchange.

Fifth, the UK Foreign Affairs Committee should keep a close watch on the unfolding crisis in Bosnia and provide advice on specific measures that the FCDO could take.

This sanctions package would send a clear signal that Global Britain will not tolerate threats to peace in Bosnia and Southeast Europe. If separatist politicians in Republika Srpska proceed to establish parallel armed forces as announced, this would represent a major escalation. In the case of such a scenario unfolding, the UK should then introduce a second round of more punitive sanctions targeting a wider circle of individuals and entities.

Post Views: 154
Previous The Enemy Within: The Impact of Corruption on Security Force Assistance
Next What Is Going to Happen in Ukraine?