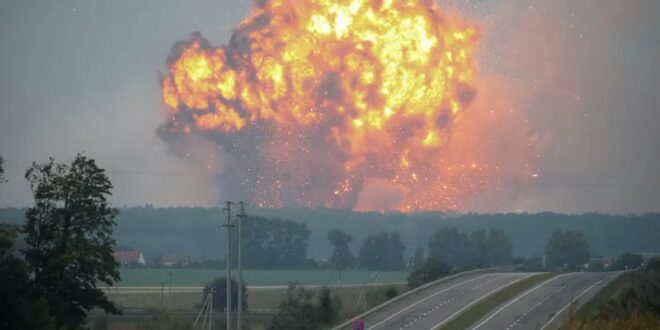 Why Moscow Would Use Overwhelming Force Against Ukraine

Russia appears to be on the verge of launching a major military operation against Ukraine. It has amassed an unprecedented number of troops on the country’s border, and Russian-led forces in the Donbas region of Ukraine have sharply escalated their attacks along the line of contact. Leaders of the Luhansk People’s Republic and the Donetsk People’s Republic, the breakaway regions of Ukraine that Russia has propped up since 2014, have blamed Ukraine for a series of explosions and attempted acts of sabotage, such as a supposed attack on a water treatment facility, that seem to be staged provocations. It appears as if Russia is engineering a pretext to invade Ukraine by conducting a false flag attack—blaming Kyiv for actions Moscow in fact instigated—and alleging that the government of Ukraine poses a threat to Russian speakers in the country’s east. U.S. President Joe Biden is convinced that Russian President Vladimir Putin has directed the military to move in.

Despite all this evidence, Putin could still get cold feet. There is a chance that Russia ultimately opts not to launch a new war. But if one happens, it would not look like the limited offensives Russia mounted in Ukraine in 2014 and 2015. Those operations resulted in Russia’s seizure of Crimea, established the separatist territories, and forced Kyiv to accept a cease-fire. But these campaigns were never enough to give Russia leverage over Ukrainian politics and foreign policy; indeed, they helped push Kyiv closer to the West. This time, if Russia invades, it would not constrain itself. It would use the bulk of its military resources—ground forces, airpower, attack helicopters, powerful missiles, and its navy—in a violent, open conflict. It would roll across large parts of Ukraine, not just the east, and try to seize the capital with the goal of installing a pro-Russian government. Such ambitions would require an extensive initial operation, followed by the entry of additional forces that could hold territory and secure supply lines.

A war between Russia and Ukraine could prove to be incredibly destructive. Even if the initial phase were quick and decisive, the conflict could morph into a dragged-out insurgency featuring a great number of refugees and civilian casualties—especially if the war reached urban areas. The scale and potential for escalation of such a conflict are difficult to predict, but they would likely produce levels of violence unseen in Europe since the 1990s, when Yugoslavia tore itself apart.

FIRE AND FURY
Russia has positioned more than 150,000 troops on Ukraine’s border—a figure that does not include Russian-led forces in the occupied territories of the Donbas (which may number 15,000), Russia’s national guard, or other auxiliary forces. Counting those, Russia could have more than 190,000 troops near the Ukrainian border. These numbers imply that Moscow is not planning a limited incursion and that it may attempt to hold on to substantial tracts of Ukrainian territory, including the capital.

The Russian military would likely open its campaign with airstrikes targeting command-and-control systems, logistical centers, airports, air defenses, and other critical infrastructure. To carry them out, Moscow could use hundreds of bombers as well as ground-launched cruise and ballistic missiles. The Russian military has also deployed near Ukraine high-powered artillery and long-range rocket systems to support its ground forces with overwhelming firepower.

Airstrikes would not go entirely uncontested. Russia’s air force lacks experience in suppressing or destroying enemy air defenses, and it rarely uses missiles that are designed to destroy radar. As a result, Ukraine’s meager air defenses could still pose a challenge. But Ukrainian air defenses are in short supply, and they would be unlikely to provide effective cover for most of the country’s ground troops. They would be quickly overwhelmed.

The opening air campaign would probably be short. Unlike Western militaries, which concentrate firepower in their air forces, Russia puts the bulk of its firepower in its ground forces, so it would quickly proceed to a ground campaign. It would start by using helicopters to drop troops into Ukraine. Russia might also strategically drop paratroopers and airlift troops and armored vehicles well behind the frontline to seize bridges or other infrastructure. The main effort of Russia’s ground campaign would be to create a pincer movement from the north that encircled Kyiv and enveloped the bulk of Ukraine’s ground forces in the eastern part of the country. Russian formations would then cut off Ukrainian supply lines and fragment the Ukrainian military into isolated pockets surrounded by Russian troops. Drones and combat helicopters would offer Russian ground forces reconnaissance and cover.

Ukrainian air defenses would be quickly overwhelmed.
The Russian navy would play a supporting role. Moscow has worked hard to modernize its Black Sea Fleet, which now has platforms—from advanced conventional submarines to corvettes—that can launch precision-guided cruise missiles. With a range longer than 1,000 miles, these missiles can strike any part of Ukraine. Russia has also reinforced the Black Sea Fleet with landing ships from other fleets. It can now conduct a significant amphibious operation, using 1,000 to 2,000 troops, to help Russian forces attack across the narrow isthmus separating Crimea from Ukraine.

In addition to relying on traditional firepower, a Russian operation would be supported by electronic warfare. The Russian military has a panoply of digital capabilities that it can use to disrupt the Ukrainian forces’ navigation and communication systems. Ukrainian commanders could suddenly find it impossible to use established channels to coordinate their response to Russia’s invasion, forcing them to use less secure means of communication.

Achieving information dominance during a conflict is a cornerstone of Russian military strategy, and Moscow would also use its cyber-capabilities to engage in psychological warfare. Hoping to confuse and convince Ukraine’s citizens, leaders, and military personnel, it would spread disinformation online, deny access to online services, and impede communication. Cyberattacks could temporarily disable key infrastructure, such as electricity, but Ukraine is resilient and has withstood cyberattacks in the past. Traditional military strikes are likely to be far more effective at destroying critical nodes than are specialized cyber-operations.

UKRAINE’S PARRY
The Ukrainian military has substantially improved since 2014, thanks to Western assistance, and it has gained combat experience from the war in the Donbas. But the experience is largely limited to trench warfare and artillery skirmishes. Kyiv is still ill prepared for a renewed Russian invasion of this scale. Ukraine’s military is generally understaffed and has limited familiarity with warfare designed to surprise and disrupt enemies. Its ground forces are composed of thousands of conscripts with limited experience. Russian battalion tactical groups, by contrast, are filled with more skilled, contract servicemen. Ukraine’s air force is dated and stands no chance against its Russian counterpart. The Ukrainian navy is essentially a “mosquito navy” of small, armored gunboats. Although reliable numbers are hard to come by, Ukraine’s ground forces might field 50 to 60 battalions against the more than 120 currently mustered by the Russian army, and these battalions do not have the same levels of combat effectiveness. Russia has far more—and far better—artillery, reconnaissance, and logistical capabilities than Ukraine does. The Russian military would have the advantage along every axis of attack.

Ukraine is vast, which makes it impractical for the country’s inferior force to mount an effective defense against an invasion. The most logical strategy for the Ukrainian military would therefore be to fight an organized retreat, imposing as high a cost as it can on any Russian advance. Falling back to more defensible terrain, such as the Dnieper River, which runs through the middle of Ukraine, could help deplete Russian forces. But Ukrainian forces would fall victim to Russian air attacks as they retreated, and Russian ground forces would move quickly to try to surround Ukrainian formations. The Russian military would also move in from Belarus in the north, allowing many troops to avoid crossing the Dnieper River. They could then attack from both west and east of Kyiv and cut off the city from most of the Ukrainian army. The fight outside Kyiv might then entail a handful of Ukrainian brigades battling far more and far more powerful Russian forces, which would be supported by airborne units. This is a fight that Ukraine would almost certainly lose.

If it quickly found itself overwhelmed, Ukraine’s military could embrace guerrilla warfare, breaking itself into smaller tactical formations with maximum autonomy. That would entail abandoning most of its heavy armor and artillery and focusing instead on infantry armed with shoulder-fired missiles to hit tanks or aircraft. But such a shift is easier in theory than in practice. The Ukrainian army is trained to operate in larger units with armor and artillery; it cannot easily turn to partisan warfare. Moreover, these tactics would be less effective than in previous wars, thanks to the rise of new technologies, such as drones using thermal cameras and cheap, high-resolution satellite imaging. Today, small groups of fighters may struggle to hide and to win on the battlefield.

In war, few things go as planned.
The Ukrainian military could retreat to cities as a last resort, forcing Russian units into urban terrain. Cities consume armies. Russia’s force may look big, but it would quickly prove paltry given the demands of urban warfare. Yet Ukraine would not make this choice lightly. Urban warfare is a bloody business, and battles over Ukraine’s main cities would likely kill substantial numbers of civilians, destroy entire neighborhoods, and do untold damage to the economy.

Russia’s leadership likely hopes that it could avoid protracted urban combat by cutting deals with regional elites who would flip control over cities to pro-Russian politicians. Moscow is undoubtedly planning to marry political schemes with its military operation in other ways, as well. If it succeeds in its political maneuvers, Russia could indeed attain a decisive initial victory. But that is a perilous assumption. Few things go as planned in war, and it is hard to predict what will happen after the opening shots are fired.

In the case of Ukraine, a war would have a host of potential long-term consequences. Ukrainian resistance might live on as an insurgency, although, paradoxically, it would be most successful in the one part of the country Russia is unlikely to invade—its west. But an insurgency, especially if externally sponsored, might still bleed Russian forces and resources over the years. A prolonged war that ravaged Europe’s largest country could radiate instability into the continent’s eastern and central regions. It could also prove to be the beginning of a series of crises between NATO and Russia. For the first time in decades, European security stands on the precipice.