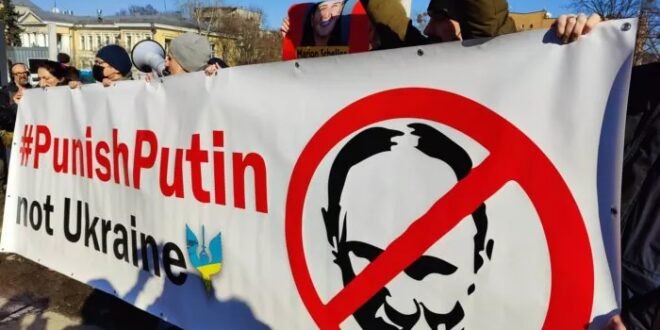 “A point of no return.” Ukraine’s civil society leaders appeal to US, EU for “severest sanctions” to stop Russia

The lives of millions of Ukrainians are at stake, and hours of delay and wrong decisions may cost dear price. If the Russian Federation is not stopped by the severest sanctions now, a disastrous war will erupt in one of the biggest countries of Europe, a breadbasket of the planet. Moreover, this war has the potential to spill over into NATO countries and grow into a large-scale regional conflict.

21 February 2022 has become a breaking point in global geopolitics, when the Russian Federation reached a point of no return in its aggression against Ukraine, a sovereign state, breaching its borders, neglecting intensive preventive diplomatic efforts of the collective West. Russia has once again bluntly violated international law.

The instruments and means Russia has used in current aggressive acts painfully remind us of the beginning of WWII and the behavior of Nazi Germany under Adolf Hitler, intentionally crafting fake casus belli acts, backed by unimaginable volumes of propaganda.

It has become evident that Russia is implementing the worst-case scenario in which the recognition of the so-called “Donetsk and Luhansk People’s Republics” is just the beginning.

A full-scale attack against Ukraine’s sovereignty with military aggression, striving to kill Ukraine’s macro-financial system, curtail energy supply, put our critical infrastructure under destruction and undermine our political institutions, will follow shortly if the West does not respond swiftly and harshly to existing Russian crimes.
The aggressor can only be stopped by effective immediate counter-actions, using a wide range of targeted sanctions. They should include asset freezes and visa bans for oligarchs from Putin’s inner circle and their family members.

Sanctions also need to target whole sectors of the Russian economy, most critical for the existence of Putin’s regime such as:

Since the beginning of this round of escalation on February 17, Russia has already killed 4 servicemen and 1 civilian.
There is no need to wait until the death toll reaches thousands to take action. It’s high time for the collective West to act and demonstrate solidarity with Ukraine now.

We urge our partners to enforce all possible measures to effectively respond and stop the Putin regime now. Russia should immediately withdraw its armed forces from all over Ukraine, as well as be decisively punished for the global blackmailing it has been doing for at least since 2008 (invasion in Georgia).

It is not only about Ukraine anymore – now the stability and security of the globe are at stake. If Putin is not stopped, we will return to the times when changing borders by force will happen regularly and all over the world.

In order to preserve the rules-based order, to help us defend our sovereign nation and emerging democracy, we urge our EU and US partners to immediately introduce a wide package of painful financial, economic, and sectoral sanctions described above.

Ukraine must receive concrete security guarantees and a wide package of military and economic assistance, including immediate deployment of the EU and NATO forces.

The EU and US leadership or their representatives should be permanently physically present in Kyiv as well as other potential targets of the Russian troops, including the eastern and southern regions of the country.

The Appeal is signed by