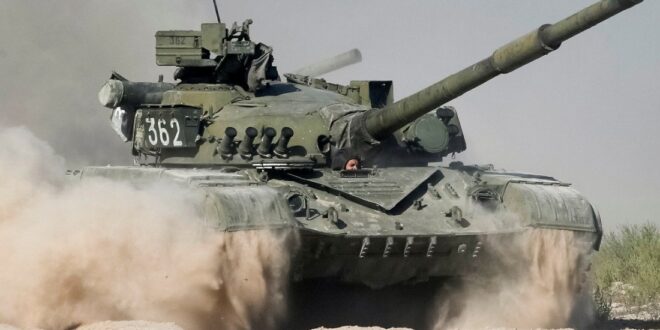 Are Russia and America Headed Towards a Disastrous Conflict Over Ukraine?

Watching President Joe Biden state on Friday afternoon that he believes Russian president Vladimir Putin has made the decision to go to war over Ukraine and to attack Kyiv itself, I recalled a disturbing experience that I recently had on Russian national television. As a former director of Russian analysis at the Central Intelligence Agency, I was asked on a prominent political talk show to discuss reports being circulated by the United States and other NATO member states about Russia’s plans in Ukraine. Did the West believe them?

I replied that intelligence analysis is an inherently difficult business. Errors of course happen, the Iraq weapons of mass destruction fiasco being among the most notable. But in this instance, I said that I was certain the U.S. government truly believes that Russia is preparing for an invasion of Ukraine.

The Russians on the show—among their country’s most informed and insightful foreign policy experts—openly scoffed. They simply would not accept that the American and British governments sincerely believed reports that Moscow was planning to stage a fake Ukrainian attack to justify a Russian invasion, that the Kremlin was preparing to install a puppet government in Kyiv, or that the invasion was set to begin on a certain date. It would be one thing, they argued, if these reports were simply fusillades in an ongoing information battle between the West and Russia. Truth is the first casualty of war, after all. But if Washington and London actually “believe their own propaganda,” as the Russians put it, then we have a genuine problem.

Indeed, we do. Russia and the West find it almost impossible to make sense of each other’s perceptions about Ukraine and the broader European security architecture. We do not merely disagree about what ought to be. We disagree about what the present reality is.

In the West, the notion that Russian experts could sincerely doubt that their government is preparing to initiate an attack on Ukraine is itself viewed as laughable. Is it not obvious that Moscow has been massing forces near Ukraine’s borders, holding ominous military exercises in Belarus and on the Black Sea, and openly threatening to take “military-technical” steps should NATO refuse demands that it back away from Russian borders? Did Russia not already prove its aggressive intentions by attacking Georgia in 2008 and Ukraine in 2014? Just as Russian experts accuse the West of peddling propaganda, we regard assertions that Russia has no intention of invading Ukraine as little more than Kremlin disinformation.

But among Russians, the suggestion that Moscow wants to attack or conquer Ukraine, a nation they regard fraternally, albeit condescendingly, is itself far-fetched. Western claims that Russia wants to stamp out democracy in Ukraine elicit guffaws. Russians do not regard Ukraine as a democracy or close to becoming one. They see its government as mired in corrupt and dysfunctional patronage politics, with little regard for the rights of Russophones. And they are incredulous at the notion that they want to reestablish the USSR. Many Russians remember the Soviet days nostalgically, but few want to recreate the old empire, recognizing how burdensome and counterproductive that would be. Where Americans see Russian forces poised for an invasion of Ukraine, Moscow sees them as part of a broader defensive effort to stop the world’s most powerful military alliance from setting up shop on Russia’s doorstep.

The situation recalls a comment that Teddy Roosevelt made about Great Britain and Germany in 1904: “[Kaiser Wilhelm II] believes that the English are planning to attack him and smash his fleet … As a matter of fact, the English harbour no such intentions, but are themselves in a state of panic terror lest the Kaiser secretly intend … to destroy their fleet and blot out the British empire from the map.” It was, he observed, “as funny a case as I have ever seen of mutual distrust and fear bringing two peoples to the verge of war.”

That case, of course, ended in the tragedy of World War I. As the distrust and fear plaguing Russia’s relations with the West today spiral toward a modern catastrophe, we should ponder some critical realities.

The first is that, like Imperial Germany and Edwardian Britain, each side today believes that it is the other that harbors hostile intent, while regarding its own actions as merely defensive. The Kremlin is convinced that the United States has long had Russia in its crosshairs, moving military forces and infrastructure ever closer to Russian territory, arming and empowering anti-Russian factions in neighboring states, and actively supporting subversive elements inside Russia itself. The West, in turn, regards Putin as the mortal enemy of democracy and freedom, both in Europe and inside the United States itself. The result has been that both sides believe they must “stand up” to aggression, producing a cycle of action and reaction that is careening toward conflict.

The second reality is that neither Russia nor the West can defeat the other, whether on the battlefield or at the negotiating table. Since the early years of the nuclear age, we have been yoked together as co-hostages, with one side’s security dependent on ensuring adequate security for the other. Our mutual vulnerability has only grown as cyber technology has deeply entangled the worlds of military operations, espionage, news, and commerce.

Neither Russia nor the West can bring Ukraine into its sphere of influence without tearing that country apart internally. The Kremlin cannot drive the United States from Europe, and Europe cannot be stable so long as Russia is excluded from the region’s most influential security organizations. Under such circumstances, any efforts to produce “win-lose” scenarios between the West and Russia will inevitably result in “lose-lose” outcomes.

John Kennedy observed that the chief lesson of the Cuban missile crisis was that the leaders of nuclear superpowers needed to defuse crises by helping each other find mutual, face-saving compromises. That applies today, no less than in 1962. The window of opportunity for averting disaster is fast closing.

Post Views: 133
Previous Dodik condemns Germany’s Baerbock on country position
Next Opinion: A path out of the Ukraine crisis