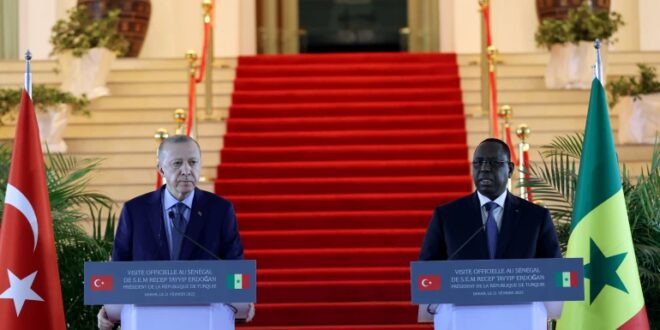 Erdogan seeks to boost ties with Africa in four-day visit

Turkey’s president has promised to boost relations with African countries as he visited the Senegalese capital Dakar during a four-day tour of Central and West Africa.

“We will continue to enhance our relations with African countries on the basis of sincerity and solidarity,” Recep Tayyip Erdogan said on Tuesday during a joint press conference with his Senegalese counterpart Macky Sall.

“We exchanged ideas on how we can further advance our relations in every area,” he said. “We once again gladly observed that we share the same determination to deepen our cooperation.”

In 2021, the volume of bilateral trade between Turkey and Senegal reached $540m. Erdogan has said the goal is to bring the figure to $1bn.

The Turkish Cooperation and Coordination Agency (TIKA), which “has since 2007 completed 186 projects in Senegal with a total value of $12m, is determined to maintain its activities,” he said.

Sall praised Turkish companies that have initiated various investment projects in the country and said investments between the two countries should increase even more.

The Turkish president is set to attend Wednesday’s opening ceremony of the Dakar Olympic Stadium, which was constructed by a Turkish company.

Erdogan, who set out on Sunday for the tour, will also visit the Democratic Republic of the Congo and Guinea-Bissau.

In Dakar, the Turkish president noted that the 3rd Turkey-Africa Partnership Summit, held in Istanbul in December, set out a roadmap in Turkish relations with Africa for 2022 to 2026.

Leaders from more than a dozen African countries attended the summit, highlighting Turkey’s expanding influence on the continent.

Since its 2019 intervention in the Libyan civil war, Istanbul has steadily expanded its African footprint as it seeks to replace Western influence on the continent.

The European Union has sought to counter both Turkish and Chinese influence, positioning itself as “Africa’s partner of choice” during a summit with the African Union earlier this month.

“The European Union is the first trading partner and the first investor in Africa,” Ursula von der Leyen, president of the European Commission, said after the two-day summit, which drew to a close on February 18. “Indeed, we need a stronger partnership between us.”