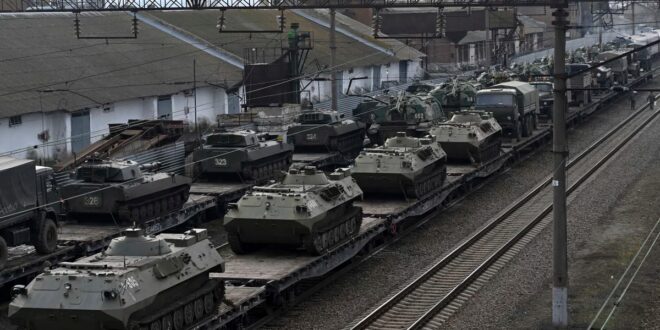 Russia invades Ukraine; explosions are heard in Kyiv and other cities

As diplomats at the United Nations implored Russian President Vladimir Putin to pull back from the brink of an invasion into Ukraine, Putin announced in a nationally televised address that his country would conduct a military operation in eastern Ukraine.

Explosions have been heard by NPR correspondents in the capital Kyiv, in the eastern city of Kharkiv, close to the border with Russia, and in the port city of Odessa in the south of the country.

Explosions have also been heard on the outskirts of Kramatorsk, a town in the Donbas region controlled by Ukraine.

Putin said the goal of the operation was the “demilitarization” of Ukraine. He urged Ukrainian troops to lay down their weapons and warned outside countries to not interfere.

U.S. President Joe Biden called Putin’s actions an “unprovoked and unjustified attack on Ukraine” and warned of “a catastrophic loss of life and human suffering.

Biden is to make an address on Thursday after a meeting with G7 leaders scheduled for 9 a.m. ET.

The U.S., the EU and their allies are hitting Russia with sanctions in response to Putin’s decision to recognize two Ukrainian territories as independent republics — and send troops there. Biden ordered new sanctions Wednesday on the Russian-owned company that is building the Nord Stream 2 natural gas pipeline between Russia and Germany as well as its officers.

Ukrainian President Volodymyr Zelenskyy said his country is prepared to defend itself.

“Only I and our army will know the clear steps regarding the defense of our state. And believe me, we are ready for anything,” Zelenskyy said.

A salty exchange in the Security Council
In the emergency Security Council meeting requested by Ukraine, the second this week, diplomats condemned Russia’s movement of troops to the Ukraine border and warned of the consequences of military action not just on the region, but on the rest of the world as well.

As word of the Russian invasion reached the chamber, Ukranian Ambassador Sergiy Kyslytsya told the other diplomats “It’s too late, my dear colleagues, to speak about de-escalation. I call on every one of you to do everything possible to stop the war.”

Kyslytsya asked Russian Ambassador Vassily Nebenzia to pledge that Russia was not bombing Ukrainian cities even as they spoke.

“You have a smartphone. You can call,” Kyslytsya angrily told his Russian counterpart.

“There is no purgatory for war criminals. They go straight to hell,” Kyslytsya told the Russian.

Cyberattacks precede invasion
Earlier Wednesday, a “large-scale” denial-of-service attack, which can render a website unavailable, hit Ukraine’s security agency, its legislature, its Foreign Affairs Ministry and other agencies, according to Ukraine’s Centre for Strategic Communications.

Administrators switched to another provider to try to minimize the damage, the center said, adding that even if the sites were back online, users could face delays.

NetBlocks, a nonprofit that tracks network disruptions, said Ukraine’s ministries of Defence and Internal Affairs were also targeted, along with civilian websites.

“PrivatBank, the largest commercial bank in Ukraine and Oschadbank, the State Savings Bank of Ukraine, have again also been knocked out along with the defence and ministerial websites,” NetBlocks said in an update.

The apparent attacks come after a separate spate of attacks last week. The White House National Security Council said on Friday that it has proof that Russia’s military intelligence agency, the GRU, was linked to those cyberattacks in Ukraine.

Ukraine says Russia has sent 300 units of military equipment over the border
This week, Russia recognized two Ukrainian territories, Donetsk and Luhansk, as breakaway republics and pledged to send troops over the border into those regions — the most serious signs yet of a full-scale invasion.

“Since the beginning of the week, a total of 300 units of military equipment of the Russian Armed Forces have been spotted” in the Ukrainian territories of Donetsk and Luhansk, Ukraine’s Defence Ministry said on Wednesday, adding that in the past 24 hours, 166 units of Russian military equipment were seen in “the temporarily occupied territory.”

As it reported those movements, the ministry said patrols from an international monitoring mission to Ukraine are also being blocked from seven towns in Luhansk and Donetsk, adding that the mission’s drones are also being obstructed via GPS signal interference.

For the emergency declaration to take effect, it will need to be approved by parliament. Zelenskyy and the National Security and Defense Council agreed to the step during a meeting on Wednesday.

The emergency measures could take a wide range of forms, Ukraine’s security chief, Oleksiy Danilov, said in an announcement on the presidential website. New restrictions could be placed on transportation: Vehicles could face inspections, he said, and people could be required to show identification documents.

Putin made the remarks in a video address to mark Defender of the Fatherland Day, speaking to veterans and members of Russia’s military.

The Russian leader said his country faces challenges in the form of “the erosion of the arms control system and NATO’s military activities.”

Putin said Russia is open to finding diplomatic resolutions “to the most complicated issues.” But that claim will likely be met with skepticism.

“I have confidence in you, Russian soldiers and officers,” Putin said, “that you will guard the peace of our people and stand up for the national interests of our great country.”

“I don’t remember a single day when our country lived without any restrictions from the Western world,” Antonov said Tuesday evening.

The diplomat also predicted that economic sanctions will harm energy and financial systems not just in Russia but worldwide, adding that ordinary U.S. citizens will see prices go up.

Russia is not a member of OPEC, but it has a great deal of influence over oil and gas prices, as one of the world’s top producers and exporters of petroleum.

U.S. consumers are already dealing with months of inflation. More recently, gasoline and natural gas prices have risen in both the U.S. and Europe.

Ukraine’s Foreign Ministry is telling any Ukrainians who are in Russia to leave immediately, warning that it won’t be able to offer help or consular services.

Also on Wednesday, the head of Ukraine’s military signed a conscription order calling reservists between ages 18 and 60 to service that will extend up to one year.