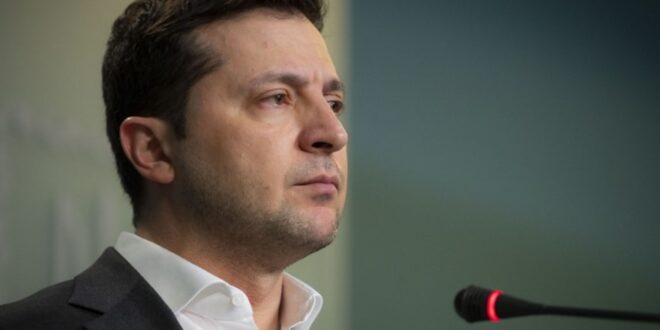 On February 24, 2022, Russia invaded the Ukraine. Ukrainian President Volodymyr Zelensky accused Russia of “treacherously” and “self-destructively” attacking the Ukraine, comparing the maneuvers to those of “Nazi Germany” during WWII. In his address to the nation, Putin stated that the goal of the invasion was to take preemptive action for the “denazification of Ukraine.”[1]

Zelensky stated that the provision of weapons to all citizens who want to defend Ukraine’s sovereignty had begun. “The future of our Ukrainian people depends on every citizen. Everyone who has combat experience and can join the defense of the Ukraine must come to the appropriate centers,” he said. He also declared martial law in the country.

Zelensky: “Our Population Is Also A Powerful Army”

“The Armed Forces of Ukraine are fighting hard battles repelling attacks by the Russian army throughout our country. The Ukrainian servicemen need the support of citizens. This was stated by President Volodymyr Zelensky during a briefing at the Office of the Head of State. ‘Our servicemen need this support. The main thing is that they need the support of our population. We have an army of powerful people. Our population is also a powerful army. So support our military,’ Volodymyr Zelensky said.

“The President called on the Ukrainian media to more actively inform the public about the success of the Armed Forces and the losses of the enemy. ‘The enemy has suffered heavy losses. The losses of the enemy will be even greater. They came to our land. Ukraine is under attack from the north, east and south. Attacked from the air. Protection works. Today, the army and national solidarity are the mainstay of Ukrainian statehood,’ the President said.

“Volodymyr Zelensky stressed that the provision of weapons to all citizens who want to defend Ukraine’s sovereignty has already begun. ‘The future of our Ukrainian people depends on every citizen. Everyone who has combat experience and can join the defense of Ukraine must come to the appropriate centers. The Ministry of Internal Affairs will involve veterans in the defense of the state,’ he said. The President also called on citizens to join the donation of blood for wounded defenders.”

Zelensky: “Russia Treacherously And Self-Destructively Attacked Our State In The Morning – Just Like Nazi Germany Did During The Second World War”

“The state of Ukraine severed diplomatic relations with the Russian Federation, which treacherously attacked it at 5 am on February 24. This was stated by President of Ukraine Volodymyr Zelensky at a briefing at the Office of the Head of State. ‘This morning has gone down in history, but this story is completely different for our country and for Russia. We have severed diplomatic relations with Russia. Ukraine is defending itself and will not give up its freedom, no matter what Moscow thinks. For Ukrainians, independence and the right to live on their land according to their will is the highest value. Russia treacherously and self-destructively attacked our state in the morning. Just like Nazi Germany did during the Second World War,’ Volodymyr Zelensky stressed.

“According to him, from today Ukraine and Russia are on different sides of world history, because the Russian Federation is on the path of evil. At the same time, according to the President, much depends on the Russian people now. ‘Today, the citizens of Russia will choose which way each of them personally is on,’ he said.

“Volodymyr Zelensky called on all Russian citizens who have not yet ‘lost their conscience’ to come out and protest against this war with Ukraine. He also asked Ukrainians who have relatives, friends, acquaintances, journalists, bloggers in Russia to address them with appropriate appeals and information so that the Russian Federation knows the truth.”

Zelensky: “All Sanctions Will Be Lifted From All Citizens Of Ukraine Who Are Ready To Defend The Country In The Ranks Of The Territorial Defense Forces”

“‘All sanctions will be lifted on Ukrainian citizens who are currently subject to restrictive measures and who are ready to defend the sovereignty and territorial integrity of the state and defend the country in the ranks of the Territorial Defense Forces.’ This was announced by President Volodymyr Zelensky during a briefing at the Office of the Head of State. ‘We will lift sanctions by the decision of the National Security and Defense Council on all citizens of Ukraine who are ready to defend our state with weapons in their hands as part of territorial defense,’ he said.

“The president emphasized that the future of the Ukrainian people now depends on every citizen of Ukraine. ‘Everyone who has combat experience and can join the defense of Ukraine must immediately come to the relevant staffing centers of the Ministry of Internal Affairs,’ said the President. Volodymyr Zelensky called the country’s economy and the continuation of enterprises’ operations another frontline. ‘Working now is also a serious job, as well as defense in these difficult conditions. Therefore, our future depends on each company, each entrepreneur. Take care of your employees, work for the sake of society, for the good of each of us. People should have all the necessary goods, all the necessary services,’ he said.

“The President also assured that the National Bank and the banking system have all the necessary resources to meet the financial needs of the state, its defense, to protect the interests of citizens. Adviser to the Head of the President’s Office Mykhailo Podoliak added that a cash withdrawal limit of UAH 100,000 has been introduced. ‘There were some interruptions a few hours ago with the possibility to pay for goods or services by card. These are all local manifestations of cyberattacks, which are accompanied by military attacks on our industries. In the banking sector, everything is sufficiently controlled,’ he said. Mykhailo Podoliak also said that the energy sector is operating normally. ‘Nuclear power plants, hydroelectric power plants operate normally. There is increased security, but it has been strengthened for several weeks. Today, of course, there is additional protection. We don’t have any blackouts yet,’ he said.”

“According to the decree, martial law is imposed from 5:30 am February 24, 2022 for a period of 30 days. This decision was made due to the military aggression of the Russian Federation against Ukraine, on the basis of the proposal of the National Security and Defense Council and in accordance with Ukrainian law.

“The Military Command, together with the Ministry of Internal Affairs of Ukraine, other executive bodies and local self-government bodies, must ensure the measures and powers envisaged by the Law of Ukraine ‘On the Legal Regime of the Martial Law’ necessary to ensure Ukraine’s defense, public safety and state interests.

“Due to the imposition of martial law in Ukraine, the constitutional rights and freedoms of man and citizen provided for in Articles 30-34, 38, 39, 41-44, 53 of the Constitution of Ukraine may be temporarily restricted, temporary restrictions on the rights and legitimate interests of legal entities will also be imposed.

“The Cabinet of Ministers of Ukraine must immediately put into effect a plan to implement and ensure measures of the legal regime of martial law in Ukraine, and provide appropriate funding.

“The State Emergency Service of Ukraine together with local state administrations and other state bodies, institutions, enterprises, organizations of all forms of ownership are instructed to immediately bring a single state civil protection system, its functional and territorial subsystems ready for the fulfillment of tasks in a special period.

“The Ministry of Foreign Affairs of Ukraine must ensure that the UN Secretary General and foreign officials are duly informed about the imposition of martial law in Ukraine, restrictions on human and civil rights and freedoms, which is a deviation from the obligations under the International Covenant on Civil and Political Rights, the extent of these deviations and the reasons for such a decision.”