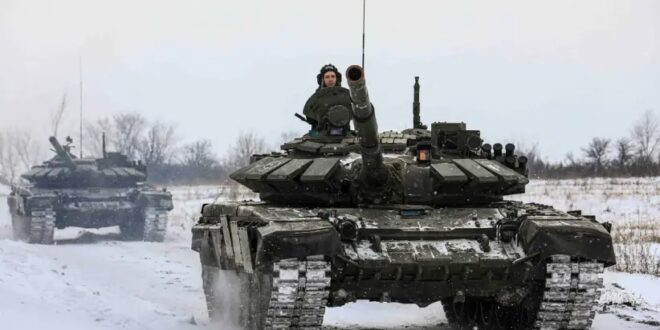 The Russian bear forgot one important thing: fuel. Without proper logistics, no army — no matter how strong — can conquer another.

Though Russian President Vladimir Putin likely envisioned a quick capture of the capital of Ukraine and quick capitulation by its President Volodymyr Zelensky, Russian forces are instead unable to reach Kyiv, not only due to fierce fighting, but also a lack of fuel.

On day four of the war, Russia has yet to fully capture any large cities and its main goal: Kyiv.

Though a small detail, the lack of fuel has left Russia in an embarrassing situation, and its vehicles and troops easy pickings for Ukrainian soldiers who have set fire to dozens if not hundreds of vehicles and captured Russian forces.

Ukrainian troops are also armed with anti-armor Javelin missiles, and fierce resistance by civilians has left dozens of columns of Russian vehicles stuck on Ukrainian roads, with videos shared on social media showing Ukrainians jokingly asking Russian troops if they want to be towed back to their territory.

While Kyiv is not far from the border of Belarus (which is aiding Russia in the invasion), Ukraine is a large territory, and since the initial assault, the Russian army and its massive mechanized force is having problems maneuvering across the country.

Prior to the invasion, Russia had an estimated 200,000 troops deployed to Ukraine’s borders. Moscow also deployed Iskander short-range ballistic missile systems, tanks and artillery. Since Thursday morning, Russia has launched over 250 ballistic and cruise missiles at targets in Ukraine, and tanks, armored vehicles, electronic warfare capabilities have crossed into the country.

Both Ukraine and Russia have been upgrading their militaries in recent years, but Russia far overpowers both in terms of personnel (850,000 vs 250,000) and weaponry. In terms of airpower, Russia has 4,100 aircraft compared with 318 Ukrainian aircraft. Both militaries have lost several aircraft since the fighting began.

According to a report by Philip G. Wasielewski and Seth G. Jones for The Center for Strategic and International Studies, “Russian army logistics forces are not designed for large-scale ground offensives far from railroads.”

After four days of heavy fighting and hundreds of kilometers of driving, Russian forces must resupply (ammunition and personnel) and refuel.

An American official said on Saturday that Russian leaders are “increasingly frustrated” with how the invasion has gone so far. and according to the British Defense Ministry, “the speed of the Russian advance has temporarily slowed likely as a result of acute logistical difficulties and strong Ukrainian resistance.”

Israel’s military is watching the war in Europe from the sidelines but has been watching closely how Russia has been moving its forces and how it uses its heavy armored vehicles and tanks in urban areas.

No IDF tanks have maneuvered into dense urban areas since the 2014 war in the Gaza Strip and the Second Lebanon War in 2006, and the Israeli military is learning lessons every day from this war.

With battlefields changing, a central part of the IDF’s Momentum multi-year plan has been to transform the IDF into a “smart army,” holistic and tech-friendly, using artificial intelligence to significantly increase its target bank and more autonomous vehicles to help troops deep behind enemy lines.

During Operation Guardian of the Walls, the IDF relied heavily on robots and machine learning and called the fighting the first Artificial Intelligence War. The Israeli military already has several unmanned ground platforms that can patrol and gather intelligence, allowing troops to remain far from enemy sights.

The IDF is also working on autonomous vehicles that will provide logistical support such as refueling or medical evacuations for troops deep behind enemy lines.

Though the IDF had significant budgetary issues for the past three years, Israel’s military continued to invest a significant proportion of its budget on innovation and advanced technology. The Combat and Innovation Methods Division was opened to lead projects for developing future weapons systems in order to meet threats the IDF will likely face in the future.

Because for Israel, it is critical not to get stuck on enemy roads. It is a matter of life and death.