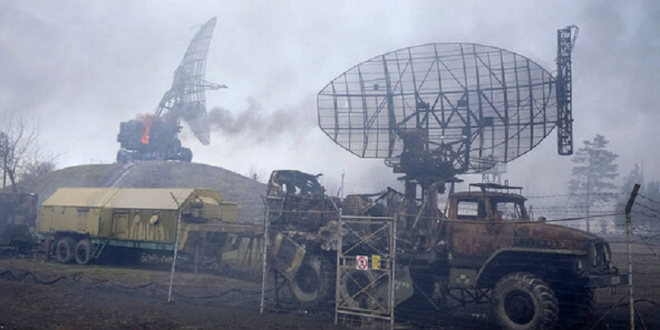 War has begun in Ukraine. What’s Putin’s plan, and do Russians back him?

Blaming the West and what he sees as its Kyiv proxies, Russian President Vladimir Putin on Thursday announced what amounts to a war of regime change, aimed at destroying Ukraine’s military potential and changing its geopolitical alignment. But he claimed his goal is not to permanently occupy the country.

The assault began in the early hours of Thursday, with air and missile attacks against Ukrainian command and communications centers, defense installations, and transport hubs. Russian airborne troops were seen on the outskirts of Kyiv Thursday evening, and incursions were reported near Ukraine’s second largest city, Kharkiv, just 25 miles from the border.

Russian military objectives seem clear, but longer-term political goals are murkier. Analysts say Russia has learned a lot watching U.S. wars of regime change, including how to use swift and overwhelming force to overcome the enemy’s capacity to resist with minimal direct contact between opposing armies.

Mr. Putin’s ambitions are a hot topic of debate, in Russia as well as the West. “He is a neo-imperialist,” says Nikolai Petrov, an expert with Chatham House in London. “He wants to establish a controlling stake in neighboring countries rather than the old-fashioned idea of grabbing land.”
Moscow

Blaming the West and what he sees as its Kyiv proxies, Russian President Vladimir Putin on Thursday announced what amounts to a war of regime change, aimed at destroying Ukraine’s military potential and changing its geopolitical alignment but, he insisted, not permanently occupying the country.

Very few Russian security analysts were picking up their phones Thursday. It seems many have been blindsided by the speed with which Mr. Putin has acted after spelling out his grievances in a lengthy speech officially recognizing two east Ukrainian rebel republics barely three days earlier.

But those who did claimed that the operation – which none will call an “invasion” – was going well, that Russia has established dominance in the air, that much of Ukraine’s military and command-and-control infrastructure had already been greatly reduced, the Ukrainian army in the Donbass region surrounded, and many strategic points seized by Russian special forces.

“Our first impression is that Ukrainian forces have very few chances” to repel the Russian onslaught, says Vladimir Evseev, a military expert with the Kremlin-funded Institute of the Commonwealth of Independent States in Moscow.

The assault began in the early hours of Thursday, with air and missile attacks against Ukrainian military airfields, command and communications centers, air defense installations, transport hubs, and supply depots. Russian armored formations dashed across the border from Belarus in the north and Crimea in the south, and Russian airborne troops were reportedly on the outskirts of Kyiv by evening.

Incursions were reported at other points, notably near Ukraine’s second-largest city, Kharkiv, just 25 miles from the border. Amphibious forces were said to be assaulting parts of Odessa, a predominately Russian-speaking port city on the Black Sea. Russian troops, backed by separatist militias, were reportedly engaging Ukrainian troops all along the 300-mile contact line in the east and driving for the port city of Mariupol on the Azov Sea.

Despite Mr. Putin’s pledge not to occupy Ukrainian territory, the separatists lay claim to the entire Ukrainian regions of Donetsk and Luhansk – of which they only hold a third at present – and seem likely to incorporate them into their self-proclaimed republics if the offensive is successful.
Political goals

Russian military objectives seem clear, but longer-term political goals are murkier. Analysts say Russia has learned a lot watching U.S. wars of regime change over the past two decades, including how to use swift and overwhelming force, in the form of missiles and air power, to overcome the enemy’s capacity to resist with minimal direct contact between opposing armies.

“We’ve already demonstrated our capabilities,” says Viktor Baranets, a former defense ministry spokesman who writes a column for the Moscow daily Komsomolskaya Pravda. “We are not attacking civilian objects, only military ones. We are pulling out the wolf’s teeth. It only depends on how long it takes the Ukrainian army to surrender.”

As for the political endgame, Mr. Evseev says he expects “the Ukrainian leadership to be overthrown by the Ukrainians themselves,” which seems to be code for installation of a puppet regime. Others argue that Moscow doesn’t care who leads Ukraine, as long as the country renounces its goals to integrate with the West, particularly NATO, and accepts its place within a Russian sphere of influence.

Andrey Suzdaltsev, a political scientist at Moscow’s Higher School of Economics, says the precedent to consider is Moscow’s 2008 war with Georgia.

In that case, Georgian President Mikheil Saakashvili was lured into attacking the Russian-protected separatist statelet of South Ossetia, and the Georgian army was subsequently defeated when Russia’s 58th Army smashed its way into the country. Russian troops penetrated into Georgia proper, did considerable damage, but declined to march on Tbilisi and withdrew, leaving Mr. Saakashvili still in power.

“The West had been pushing Saakashvili into action, but then abandoned him to his fate,” Mr. Suzdaltsev says. “The Georgian army fought well enough, but it was defeated and basically ceased to exist. Russia had made its point, and then withdrew without taking any Georgian territory. I think something similar will happen with Ukraine.”

Post Views: 365
Previous Imaging The Day After A Russian Conquest Of Kyiv: Not A Pretty Picture – Analysis
Next Ukraine attack: Putin target may be democracy, near and far