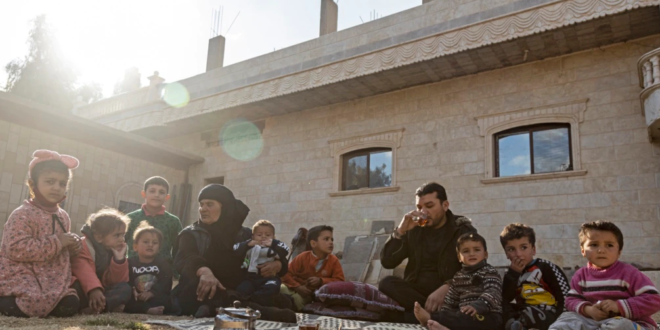 Raqqa, the former capital of the Islamic State (IS) and home to about 300,000 people, is now free.

Yet many of its people want to leave. Those with property are trying to sell it to save up for the journey to Turkey. Those without money struggle to get by.

In some ways, the city’s recovery from IS rule is clear. Cafes and restaurants are full of people. Kurdish-led forces stand guard on major streets.

But poverty is widespread. People line up for basics such as bread. Unemployed young men sit around. Water and electricity are limited. Many live among bombed-out ruins.

Local officials say at least 30 percent of the city is destroyed.

Poverty and unemployment drive young men into the arms of IS. Kurdish investigators say new IS recruits captured last month had been drawn in by money. At the same time, the Kurdish-led city government received applications from 27,000 job seekers last year, but had no jobs.

Milhem Daher, a 35-year-old engineer, is in the process of selling his home, businesses and properties to pay a smuggler to take him and his family of eight to Turkey, a key route for Syrians trying to get to Europe.

He plans to leave as soon as he has enough money.

Daher survived Raqqa’s recent violent history, including the beginning of Syria’s civil war in 2011, and the 2014 takeover by IS militants who turned the city into a capital. A United States-led coalition dropped thousands of bombs on the city to drive out IS.

Now Daher is selling off what remains of his failed businesses to start a new life. He needs $10,000.

In Raqqa, having money can also be a problem as kidnappings are on the rise.

Real estate developer Imam al-Hasan, 37, was taken from his home and held for days by attackers. To secure his release, he paid $400,000, money belonging to him and traders who trusted him with their life savings. He complained to the local authorities, but he said nothing was done. A month after the event, bruises are still visible on his face and legs.

Al-Hasan, too, is selling his home and belongings. “There is nothing left for me here,” he said.

Two of Al-Hasan’s relatives, who left in September and recently arrived in Europe, said that apart from economic issues it was the threat of more violence that pushed them to leave.

“At any moment the situation could explode, how can I stay there?” said Ibrahim, 27.

He and Mohammed, 41, spoke under the condition that only their first names be used. They were worried about the security of their wives and children still living in the city.

Back in Raqqa, Reem al-Ani, 70, prepares tea for two. Her son is the only one of four children who has remained in Syria. The others are spread across the world.

The stairs leading to their apartment are filled with bullet holes, the remains of battles against IS.

She has grown used to a silent house. She said about her children, “I miss them.”

Samya Kullab reported on this story for the Associated Press. John Russell adapted it for VOA Learning English.

Post Views: 196
Previous German Chancellor to Visit Israel Wednesday as War Rages in Europe
Next Australian ISIS terrorist is released from jail and thrown in immigration detention while Turkey figures out where to deport him to – but NO country will take him