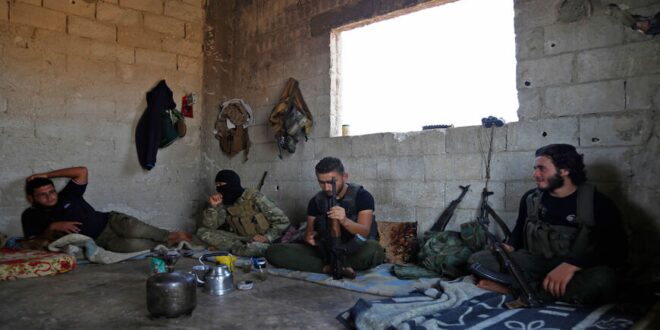 While some believe that Hayat Tahrir al-Sham is tightening the noose around foreign fighters in Idlib with the ultimate goal to expel them, others consider that it serves the interest of civilians in the city of Idlib.

Hayat Tahrir al-Sham’s (HTS) security apparatus has recently warned the families of foreign fighters that they need to vacate their places of residence and businesses in the city of Idlib in northwest Syria.

Local sources told Al-Monitor that HTS gave the foreign fighters’ families no more than several days to leave Idlib. The security apparatus summoned a number of those families for interrogation to find out more about their relatives who came to Syria to fight against the government forces.

The owner of the well-known @MzmjerSh Twitter account of a jihadi from Syria said in Feb. 17 tweet that HTS told some foreign fighters that they are not welcome in Idlib. He said some of these fighters reached out to their respective embassies to surrender themselves due to restrictions, while others considered traveling toward the north or to Afghanistan.

HTS explained in a statement published by its affiliated media agency that the demand that foreign fighters and their families leave Idlib is not only limited to the groups that joined the Syrian revolution (opposition), but also all those who exploited the houses they live in and committed criminal offenses or security crimes.

It continued that the decision involves all members of all factions, including HTS members, and is not limited to a specific segment or nationality.

HTS promised that the concerned authorities will seek to find alternatives for some of these segments, especially those in need, based on the available capabilities.

Commenting on the matter, Khalil al-Muqdad, a Qatar-based researcher focusing on jihadi groups, told Al-Monitor, “It is not something new for HTS to get rid of its rivals in its areas of control. HTS sought to impose itself as the sole faction there. HTS has fought the Islamic State [IS], and it eliminated Jund al-Aqsa and other factions that are considered moderate and enjoy international and regional support, such as the Hazm movement. But during each of these operations, the circumstances were different.”

He said, “[However] it is unusual for HTS to request that foreign fighters leave Idlib or its areas in northern Syria, because these foreign fighters coordinate with HTS and only act upon its orders, even though they are within its ranks. Also, they do not carry out any operations against the Bashar al-Assad regime without its approval.”

Muqdad added, “HTS’ demand is in line with the regional understandings between Turkey and Russia. Russia increased pressure on Turkey recently to fulfill the promise of pushing jihadis away from the area [in northwest Syria]. Thus, HTS’ attempt to get rid of its former allies could be explained in this framework. In this vein, it succeeded in weakening most of the factions, such as Hurras al-Din, Ansar al-Sharia, Jund al-Sham and Ansar al-Din Front.”

Foreign fighters find it difficult to reorganize their ranks in new factions, given the lack of favorable popular environment or logistical support. In addition, their elements can neither join IS in the desert nor al-Qaeda in Afghanistan, fearing any liquidation risks, and because the Taliban is in control of Afghanistan and al-Qaeda’s presence has practically ended.

Abbas Sharifa, an expert on radical Islamic groups and researcher at the Jusoor Center for Studies in Istanbul, told Al-Monitor, “Today, HTS does not accept the presence of any non-Syrian fighter in Idlib or any fighter that is not part of its ranks. It does not want foreign fighters who are not under its management. HTS fears that the independent fighters would eventually form jihadi factions and fight it. They want to prevent more elements from joining the ranks of IS and Hurras al-Din and they see the foreign fighters as a security threat.”

A former Tunisian jihadi residing in Idlib told Al-Monitor on condition of anonymity, “HTS has begun to get rid of foreign fighters to serve its own interests, to be accepted by the world and to be seen by the world as a stakeholder in the fight against terrorism. After it took control of Idlib with the help of foreign fighters, it monopolized power and began to get rid of them. It used them to fight IS at the height of its power, and against Jund al-Aqsa at the end of 2016.”

He said, “HTS also used foreign fighters to expel the Free Syrian Army factions, such as Ahrar al-Sham, Nureddin Zengi Brigade, and others. It used them to promote its control and now it is fighting them in order to improve its image before the international community.”

He added, “Many foreign fighters are now thinking of leaving Syria and going to Afghanistan illegally via Turkey and Iran. Some of them may leave Idlib and go to their home countries. Many of them are preparing to leave Idlib.”

Ahmad al-Omr, an Idlib-based journalist close to HTS, told Al-Monitor, “The issue about going after foreign fighters is now what the media is making it out to be. It is more of a service or organizational matter that HTS is carrying out in a specific area of Idlib city. There are many foreign fighters living in houses that do not belong to them. After ownership of these houses was proved, the owners resorted to courts to retrieve their homes.”

He noted, “Also, other foreign fighters are living in houses that belong to HTS’ Salvation Government, and they don’t even pay rent. Most of the foreign fighters in Idlib work under the umbrella of HTS, which meets all their needs. How could it then expel them? And many hold leadership positions in HTS. HTS’ policy toward foreign fighters has never changed.”