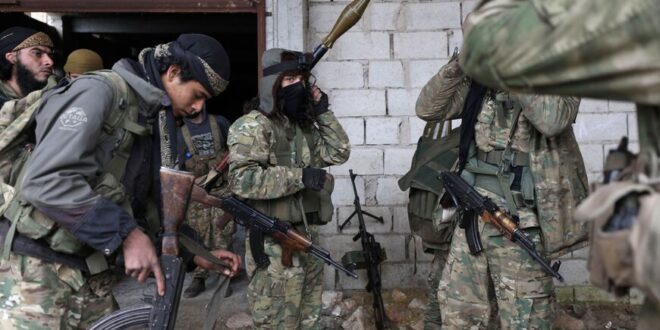 The stories of fighters who turned from the Islamic State to Syria’s rebel opposition forces show the how kinship ties, regionalism, and material concerns often trump ideology in the Syrian war.

As the Islamic State’s meteoric rise reversed course in 2016, the terror organization’s fighters in northeast Syria faced a critical question: where could they flee after years of antagonizing local communities?

Those motivated by ideology to fight to the end, or lacking an avenue to escape, moved from one area to the next as IS lost territory. Thousands of these men were killed in combat or imprisoned, their families consigned to indefinite detention.

However, a minority managed to join armed groups they had previously fought, including Syrian revolutionary outfits that are today organized under the Turkish-backed Syrian National Army (SNA).

The story of these turncoat IS fighters illustrates how kinship ties, regionalism, and material concerns often trump ideology in the Syrian war, more than a decade after protestors took to the streets against the regime of President Bashar al-Assad.

“IS took control of our areas in the east, killed our young men who were in the [rebel] Free Syrian Army, and labeled my relatives apostates and disbelievers. They tried to assassinate me several times,” an SNA commander from Deir ez-Zor province told Al-Monitor on condition of anonymity. He denied that the SNA harbored IS members within its ranks, saying that background checks preclude former terrorists from joining.

But the testimony of three erstwhile IS fighters who spoke to Al-Monitor says otherwise. Familial and tribal ties with SNA members facilitated their integration into the Turkish-backed coalition. After fleeing areas captured by the Syrian Democratic Forces, they joined up primarily to avoid arrest and imprisonment by the SNA itself, or by the former al-Qaeda affiliate Hayat Tahrir al-Sham, on charges of belonging to IS.

“I joined IS in 2013, but after Raqqa was captured [by the Syrian Democratic Forces], I returned to my family in the Idlib countryside that was controlled by Hayat Tahrir al-Sham,” SNA officer Jassem Awwad told Al-Monitor, under a pseudonym. “After the SNA captured Afrin in winter 2018, I joined [the SNA’s] Free Men of the East brigade by way of a relative of mine who was a leader in the organization. I announced that I disavowed IS, and became a member of the SNA.”

“Sometimes I face threats from other leaders who say they’ll expel me on the charge of being in IS when I have personal disagreements with them,” continued Awwad. He said he joined SNA only “to protect myself from being detained by the SNA or Hayat Tahrir al-Sham. And also in order to support my family.”

An officer with the SNA’s Sham Front told Al-Monitor on condition of anonymity: “I fought alongside IS in the Syrian desert, and when I left the group in 2020, I went to my family in the Aleppo countryside. The SNA detained and then released me thanks to tribal mediation.” His family convinced him to join SNA for his own protection, and “they put me through a rehabilitation course consisting of religious lessons that refute IS’s beliefs.”

An advance copy of a report by the human rights organization Syrians for Truth and Justice, provided to Al-Monitor, lists 25 former IS fighters currently serving within the ranks of the SNA. The group documents 27 more, including 11 officers, in a June 2021 report.

Bassam al-Ahmed, founder of Syrians for Truth and Justice, told Al-Monitor, “Whenever we publish reports like this, Turkey and the armed groups themselves claim they will investigate violations … but this is actually for the consumption of the media and nothing changes on the ground.” Ahmed added, “The most dangerous thing is that they [SNA] are controlling detention centers in an area which Turkey claims is a safe area for civilians, but this area became safe for the former Islamic State members, not for civilians or the Kurds.”

The 2021 report pointed to two SNA leaders, both from eastern Deir ez-Zor province, as helping IS fighters flee towards SNA-held areas: Abu Hatem Shaqra of the Free Men of the East Brigade, and Hussein Hamadi of the Eastern Army. Tribal affiliation is a strong marker of identity in Deir ez-Zor. The intercession of tribal notables helped convince these two SNA leaders to “receive [IS] fighters and place them under the protection of their groups,” an IS member who became an SNA official said in the report.

A former fighter with the SNA’s Nur al-Din al-Zinki brigade, speaking to Al-Monitor on condition of anonymity, said, “Let’s say I was from the eastern regions and my cousins, my tribesmen are present in SNA areas, and they’ve got a brigade. I’ve left IS and arrived in SNA areas, so I’ll join them — because my connection to them is stronger than my connection to any armed group.’”

Of the 27 former IS members documented in the June 2021 report, half enlisted with the Free Men of the East or the Eastern Army, although these groups are only two among dozens under the SNA banner.

On paper, the SNA is a regular army under the control of the Syrian opposition’s interim government in exile, headquartered in Istanbul. In reality, it is a collection of armed groups with strong regional affiliations held together by a weak central command, as demonstrated by repeated bouts of internecine fighting.

This decentralized structure enables individual battalion commanders to accept former IS members in violation of official SNA policy. The SNA’s dismal record on human rights abuses and war profiteering hardly lends itself to a culture of accountability. On the contrary, the worst offenders remain in their posts, chief among them the Free Men of the East’s leader Abu Hatem Shaqra. The US Treasury sanctioned Abu Hatem in July 2021 for human rights violations and harboring “a number of former IS officials.”

Even IS members who cannot integrate themselves into the Turkish-backed rebel coalition consider SNA territory their best option to hide, said Abdul Salam al-Hussein, editor-in-chief of Naher Media, which is based in Deir ez-Zor and reports on local news.

“There are not a lot of security operations targeting them there, which affords a type of protection. They establish themselves in particular in the Peace Spring areas,” Hussein told Al-Monitor, referring to territory that the SNA captured from the Syrian Democratic Forces during a 2019 Turkish-backed offensive.

The recent killing of IS’s leader in Atmeh, near the Turkish border, underscores the terror group’s ongoing presence in what is known as the “Liberated North” — territory along Turkey’s border that falls under SNA and Hayat Tahrir al-Sham control. Abdullah Qardash’s death “is proof that there’s still IS members hiding in the area as sleeper cells,” said the SNA commander who fought IS in Deir ez-Zor.

“I won’t say we’ve cleared our area 100%, but we’ve reached a good stage in terms of catching these IS cells and presenting them to the judiciary,” he told Al-Monitor. He was referring, of course, to those underground IS fighters whose family connections did not enable them to enlist with the SNA.