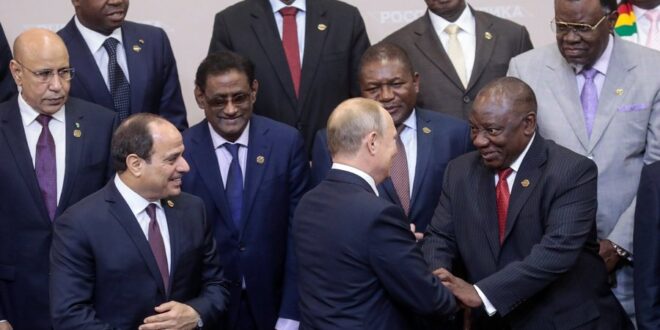 Analyzing the Russia-Ukraine Conflict from an African Standpoint

African countries’ reservations on condemning Russia’s invasion to Ukraine can be explored through growing Russian ties with African leaders. Those who did condemn also called out Western double standards on international law.

How will African countries react to the Russian invasion of Ukraine, and what diplomatic fissures are likely to be opened by the conflict as it drags on?

Early indications are that African countries will line up behind the United States and its Western allies in stout defense of Ukraine and Ukrainian independence, issues of territorial integrity and political sovereignty being understandably high on their list of concerns.

The tone for this appears to have been set by the rousing speech in defense of national sovereignty by Kenya’s Permanent Representative to the United Nations Martin Kimani. Invoking historical parallels, Kimani pulled no punches in decrying Russian aggression and rejecting “irredentism and expansionism on any basis, including racial, ethnic, religious or cultural factors.”

At the same time, and in a reference that many observers appear to have glossed over, Kimani also condemned “the trend in the last few decades of powerful states, including members of this Security Council, breaching international law with little regard.”

Kimani was walking a fine line: condemning Russian bullying of a weaker neighbor on one hand and echoing longstanding concerns by African and other postcolonial countries about the perceived fundamental inequitableness of the international political system on the other. From this angle, the problem is not that Russia has launched an unprovoked assault on Ukraine, but that its violation of diplomatic norms merely extends the historical pattern whereby powerful Western countries—especially the United States—have violated international law at will, only to turn around and preach respect for the same when it suits them.

Perhaps this explains why, compared to Kimani’s vigorous condemnation, the response from the rest of the continent has been relatively muted. The South African response was measured: “South Africa calls on Russia to immediately withdraw its forces from Ukraine in line with the United Nations Charter…” The African Union (AU) simply urged a ceasefire, while calling on both Russia and Ukraine to “preserve the world from the consequences of planetary conflict.” Significantly, Nigeria, the continent’s political and economic powerhouse, has not issued a direct condemnation; on the contrary, it has expressed relief that Russian attacks were “confined to military installations in Ukraine” and concerns about the safety of Nigerians living in the country. Tellingly, when a local journalist pressed the Nigeria’s Foreign Affairs Minister Geoffrey Onyeama about Nigeria’s stance on the conflict, all he did was sigh and walk away.

Why the reticence from African countries?

First, we must entertain the possibility that Russian leader Vladimir Putin’s strongman rule holds a dark appeal for reluctant democrats and out-and-out dictators in Africa and elsewhere. The new junta in Mali and its Sudanese counterpart are close allies of Putin. Not unlike China, Russia offers a model of support in which a clean human rights record is a not a condition of friendship. The presidency of Donald Trump, notorious for its brazen assault on democratic norms, may have convinced such leaders that there is nothing to choose between the United States and the rest.

Second, Russian courtship of African leaders has quietly intensified in the past few years. While Chinese diplomatic and economic presence in Africa has garnered the most attention, Russia has been steadily providing broad military and intelligence support for African countries. A recent study by three Russian scholars concluded that bilateral relations with Egypt, Algeria and Morocco “have increased at both political and economic levels recently.” In other parts of the continent, Russia has signed military cooperation agreements with various countries, while Russian mercenaries from the Wagner Group have been reportedly involved in conflicts in the Central African Republic (CAR) and Mali respectively. An elite squad from the Wagner Group currently makes up CAR President Faustin-Archange Touadera’s personal security detail. The first of its kind Russia-Africa Economic Forum in Sochi in 2019 was attended by forty-seven African heads of state.

African leaders may be weighing their philosophical commitment to sovereignty and territorial integrity against concrete material and military support from a leader whose intentions they suspect, but whose support with no strings attached has come in handy.

Third, irredentist talk tugs at the heartstrings in a continent where some still regard colonial borders as illegitimate. Kamani was gesturing at this when he referred in his speech to “the borders that we inherited,” and presumably “were not of our own drawing,” but “drawn in the distant colonial metropoles of London, Paris and Lisbon, with no regard for the ancient nations that they cleaved apart.”

This trope is not exclusive to Africa. It resonates across the postcolonial world.

Finally, Russia appears to have tapped into ascendant anti-Western current in Africa and elsewhere that predates the Ukrainian conflict. As flagged above, this partly derives from resentment emanating from perceived Western double standard regarding international norms; it is also arguably of a piece with the prevailing intellectual paradigm whose argumentative centerpiece is “decolonization.” In corners of the African academy, if not among a cross section of the intelligentsia, sympathy subsists for a country that—in its previous Soviet incarnation—backed African “liberation” movements and provided a countervailing balance to American hegemony.

Legitimate or not, this barely disguised resentment indicates that the West cannot afford to take African support for granted. While African countries may go along in broad solidarity with the people of Ukraine, they should not be expected to follow Western dictates blindly.

For its part, Russia will continue to manipulate existing networks with a view to opening and exploiting cracks in African support.

The longer the conflict goes on, the less predictable its moral geography.

Post Views: 194
Previous Europe needs to prepare for a future without Russian energy
Next As Qatar becomes a non-NATO ally, greater responsibility conveys with the status