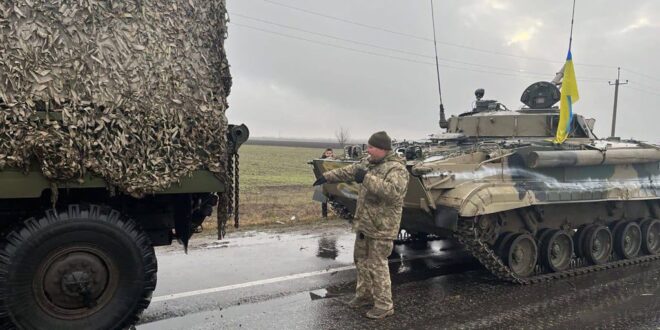 During the first week of the war, Russian ground forces have become bogged down outside of the northern Ukrainian cities of Kharkiv and Kyiv due to their failure to establish air superiority (which has resulted in significant aircraft and helicopter losses), too few troops to execute three simultaneous thrusts (toward Kyiv and Kharkiv, and north from Crimea), poor coordination of fires and maneuver, significant logistical issues, and stronger than expected Ukrainian resistance. Russia’s naval superiority in the Black Sea has contributed to success in its southern area of operations, with Russian forces breaking out from the Crimean Peninsula and taking territory in southern Ukraine. Although Ukraine has fought well and disrupted plans for a quick and decisive Russian victory, the situation is still perilous. Russia is moving to encircle Kyiv and Kharkiv and appears to have switched to indiscriminate long-range fires—resulting in significant collateral damage in residential areas—and is making significant progress in the south.

Air and air defense: Russia has failed to establish air superiority and is unable to provide required air support to its ground forces.

Battle for Hostomel (the Battle of Antonov Airport). On February 24 and 25, Russia and Ukraine fought a ferocious battle for Antonov Airport in Hostomel, just ten kilometers northwest of Kyiv. Russia conducted a large air assault to take control of the airfield, but Ukrainian forces held throughout February 24. According to Ukrainian sources, during the battle, eighteen IL-76 Candid cargo aircraft took off from Pskov Airport in Russia and were heading to Antonov Airport, likely loaded with either paratroopers or heavy equipment to support the paratroopers. We surmise the airlifted force was designed to help spearhead the Russian attack on Kyiv. The Ukrainian defense of the airfield on February 24 slowed the advance on Kyiv, possibly preventing a rapid capture of the capital. The Russians eventually took control of the airfield on February 25, but reporting indicated that the airfield was heavily damaged and nonoperational.

Limited effectiveness of the stand-off weapons (SOW) strike. According to the US Department of Defense, Russia launched approximately one hundred cruise and ballistic missiles and employed seventy-five bombers in attacks on the first night of the conflict against critical governmental and military targets throughout the country, including command and control (C2), communications, airfields, radars, and surface-to-air missile (SAM) systems and sites. Though they appeared to score some hits, we do not see devasting effects of the SOW strike: Ukrainian military systems were still up and operating after the initial volley of missiles strikes. The pace of Russian SOW strikes has decreased significantly since the first night. The failure to concentrate fires has allowed Ukraine to weather the SOW strikes.

Poor integration of non-kinetic fires and electronic warfare. The Russian cyberattacks kickstarting the conflict were more limited than we expected and did not support the greater air-superiority objective. Were the Russians able to cut off Ukrainian military leaders from those they are commanding, or at least disrupt their C2 and communications to the tactical forces, Ukrainian air and air-defense forces would have been forced to fight in an uncoordinated fashion, making them less lethal and more susceptible to attack. Russia deployed numerous electronic attack vehicles to the front, and we expected it would attack across the electromagnetic spectrum, including denying or disrupting communications (space-based and terrestrial), airborne- and ground-based radars, and satellite precision navigation and timing (PNT). So far, there has been no reporting of large-scale communication, radar, or PNT disruption, allowing Ukrainian air and air defenses to communicate, navigate, and build an intelligence picture of the battlespace.
Poor Suppression of Enemy Air Defenses (SEAD) doctrine, training, and execution. The Russian forces have failed to effectively execute the SEAD mission. From our perspective, Russia has not learned from the 2008 Georgia conflict, the vital importance of finding and destroying radars, air defense C2, and SAMs at the onset of hostilities. Russia has not developed a dedicated SEAD force, and its unsuccessful execution implies significant issues with the SEAD doctrine, training, or (more likely) both. The Kremlin’s inability to suppress or destroy Ukrainian SAMs has led to an unknown number of aircraft and helicopter losses and has limited the number of sorties—operational flights made by a single aircraft—flown by their attack aircraft and helicopters, likely because the operating environment has not been cleared of surface-to-air threats.

Limited effectiveness in destroying Ukrainian fighter aircraft. Russia did target Ukrainian airfields with its initial air and missile strikes, and, though confirmed photos and videos display hits to multiple airfields, they were not rendered inoperable, and Russia destroyed few fighter aircraft. As a result, the Ukrainian air force has continued to generate sorties, contesting Russian air superiority.

Poor integration of battlefield intelligence. Russia appears to have failed to provide near-real-time intelligence to enable attacks on mobile targets, specifically the S-300 SAM. Because the Russian air force has been unable to find and these mobile SAMs, they remain a deadly threat to Russian aircraft and helicopters.

Failure to concentrate effects. Russia has failed to execute an effective combined arms, multi-domain campaign to enable air superiority. So far in the conflict, Russia has used airborne, ground-, and sea-launched cruise and ballistic missiles, and Russian forces have conducted cyberattacks and potentially leveraged electronic warfare. These attacks have failed, however, in concentrating effects on the battlespace, particularly in the battle to gain air superiority over the Ukrainians.

Navy: In the first few days of the war, the Russian navy achieved its aims of establishing sea control in the northern Black Sea from Sevastopol to the southern Ukrainian border and in the Sea of Azov. The Black Sea Fleet will remain a supporting arm of Russian combat operations ashore and cut off any Ukrainian approaches from the Black Sea.

Black Sea. According to Automatic Identification System (AIS) data, nearly all commercial traffic has departed from the northern Black Sea and the Sea of Azov or are at anchor. Additionally, likely as part of the effort to establish sea control, as of February 25, two cargo ships (one Turkish-owned and one Moldova-flagged) were attacked. Russian efforts to control merchant traffic in the Black Sea effectively cut off any international resupply efforts to reach Ukraine from the sea.

Amphibious operations. Russia has two amphibious groups. The first group in the Sea of Azov conducted an amphibious landing west of Mariupol, with its ground units splitting into two groups. One of these groups assisted with the attack on Mariupol, and the other moved west in support of ground forces along the southern route. The second amphibious group remains in the northern Black Sea and is likely waiting for the right military and weather conditions to conduct an amphibious landing in the vicinity of Odesa.
Turkish Straits. On February 25, Turkish Foreign Minister Mevlut Cavusoglu responded to a request from Ukraine to close the Dardanelles to Russian warships by stating that “Turkey can stop the passage of warships through the straits. But there is something else in the Montreux Convention. If there is a demand to [let] the ships of countries at war to return to their bases, it must be allowed.” That means Turkey will block any warships entering the Black Sea except for Russian ships that are returning to their home port in Sevastopol or Novorossiysk. Another development that we believe could impact Russian naval operations is the possible movement of the six amphibious ships currently in the Black Sea. If these ships depart for resupply in their home ports in the Baltic or North seas, they would then be barred from returning to the Black Sea.

Nuclear-capable forces: Over the weekend, Putin made a televised statement ordering his defense minister and general staff chief to put Russia’s deterrence forces on a “special regime of combat duty.” This decision may be reflective of the “escalate to deescalate” strategy, the Russian military doctrine that calls for threatening to use tactical nuclear strikes early enough that the confrontation ends on favorable terms for Moscow. Nevertheless, for the United States and its allies, it was alarming that Putin decided to elevate nuclear weapons. Despite concerns over the threat, according to the US Department of Defense, Putin’s words have yet to be matched by any “noticeable muscle movements” that would indicate unusual nuclear deployments by Russia.

Putin is likely playing the nuclear card to divide NATO. Putin’s desire to raise the salience of nuclear weapons is driven, in part, by an expectation that such rhetoric may divide what has been a remarkably unified NATO response thus far.

We have not seen Russian movements to mobilize their strategic forces. Typically, moving to a nuclear alert involves strategic bombers being rolled out of hangars and put on flight patrols, ballistic missile submarines being flushed out to sea for deterrence patrols, and road-mobile missiles being driven away from garrison shelters. These moves are highly—and intentionally—visible, signaling nuclear readiness to one’s adversary. We have seen none of this from Russia.

US nuclear posture remains steady in response. US Strategic Command (the military organization which commands and controls US nuclear forces at the direction of the president) issued a statement saying that the United States “remains at an appropriate posture,” while White House Press Secretary Jen Psaki said this alert was in-keeping with Putin’s pattern of “manufacturing threats that don’t exist.” When asked if Americans should be worried about the possibility of nuclear war with Russia, US President Joe Biden said, “no.” This is a measured and calibrated response to avoid escalation.

Ground forces: Russian advances have been slowed primarily by strong Ukrainian resistance, the fact that its forces are mainly limited to roads, and logistical problems. The Russians have plenty of combat power to regain the initiative and defeat Ukrainian resistance, but they may have to resort to more indiscriminate aerial bombing and artillery barrages.

Ukrainian resistance. Viewed as the underdog, Ukraine has rallied to put up a fierce fight in the early days of war. However, Russia still holds the overwhelming combat power advantages that will eventually grind down Ukrainian forces as the war continues.

Russian maneuver limitations. The spring thaw has already started, so the Russians remain primarily on roads to enable quick advances. This funneling through choke points makes Russian forces vulnerable to Ukrainian drones and hunter-killer teams with Javelins. The Russians could increase maneuver off-road as they start siege tactics and work to encircle major cities.

Logistical problems slowing Russian advances. We have seen several reports of Russian armored forces running out of fuel, which is to be expected considering that Ukrainians have targeted the lengthening Russian supply lines and have destroyed approximately sixty fuel tankers. As Russia commits more forces to the conflict, it will focus on hardening its supply lines.

Post Views: 226
Previous Inside Vladimir Putin’s criminal plan to purge and partition Ukraine
Next Europe needs to prepare for a future without Russian energy