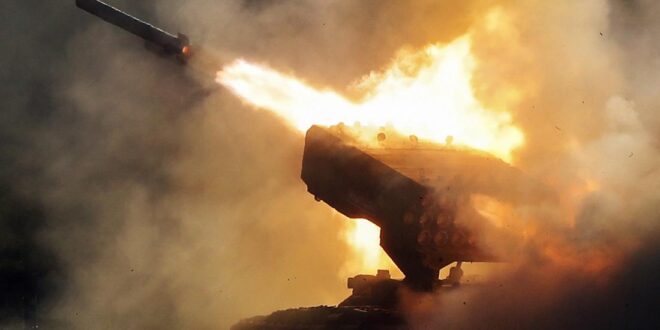 Thermobaric rockets: Russia’s most fearsome weapon that could destroy a city block in a single shot

As the fighting in Ukraine intensifies in its largest cities, fears are rising that a war of attrition will mean an escalation of violence and the use of ever more deadly weapons.

On Saturday, a CNN correspondent captured footage of what appeared to be a TOS-1 heavy flamethrower system being transported to the Ukrainian border near the Russian city of Belgorod.

Nicknamed “Buratino” in reference to the Russian version of Pinnochio – because of its long, pointed nose – the TOS-1 is a 24-tube 220 mm multiple rocket launcher and one of the most fearsome weapons in Russia’s arsenal.

What particularly raised eyebrows in CNN’s footage was the weapon the TOS-1 is used to launch: vacuum bombs, also known as thermobaric rockets.
What is a thermobaric weapon?

The word thermobaric comes from the combination of the Greek words thermos, ‘heat’, and baros meaning ‘pressure’. In practice, this weapon combines shockwaves and vacuums to produce a high-temperature explosion.

“It’s a weapon that, when it explodes, will release its explosive – or its fuel – and will create an overpressure effect that’s going to end up in a much greater detonation and be really devastating because of the shock wave,” Jean-Marie Collin, expert and spokesperson for ICAN France, the French branch of the International Campaign to Abolish Nuclear weapons, told Euronews Next.

The need to use such a weapon is “this ability to create an overpressure that will create an extremely strong shock,” he explained.

The TOS-1 was first deployed by Russia in Afghanistan in the 1980s and most recently in Chechnya and Syria, designed to take out infantry, bunkers, fortifications, and vehicles.

Collin traces them back further.

“The first uses go back to the Second World War. And it’s also been used quite a bit in the wars, unfortunately, in Iraq or Afghanistan, most likely as well. So the use of a thermobaric weapon is something that, unfortunately, is used in different conflicts,” he said.

While the US also makes these types of weapons, Russia is believed to have detonated the biggest yet in 2007, creating an explosion equivalent to 39.9 tons.

Back in 2015, Dave Majumdar, the Defence Editor for the website The National Interest, explained that “Buratino can obliterate a roughly 200 m by 400 m area with a single salvo. In other words, it can instantly turn several city blocks into smouldering rubble with a single shot”.

How dangerous are they?

In February 2000, a report from Human Rights Watch sounded the alarm about the devastating effect of thermobaric weapons, quoting a study made by the US Defence Intelligence Agency.

“The [blast] kill mechanism against living targets is unique—and unpleasant. (…) What kills is the pressure wave, and more importantly, the subsequent rarefaction [vacuum], which ruptures the lungs. (…) If the fuel deflagrates but does not detonate, victims will be severely burned and will probably also inhale the burning fuel,” the study said.

“Since the most common FAE fuels, ethylene oxide and propylene oxide, are highly toxic, undetonated FAE should prove as lethal to personnel caught within the cloud as with most chemical agents”.

The study described that symptoms could be more dangerous in confined spaces.

“Those near the ignition point are obliterated” the study detailed. “Those at the fringe are likely to suffer many internal, thus invisible injuries, including burst eardrums and crushed inner ear organs, severe concussions, ruptured lungs, and internal organs, and possibly blindness”.

For Collin, the impact is still very different from a nuclear bomb.

“A nuclear weapon is still a weapon of mass destruction whose use has long-lasting consequences, which is not the case with a thermobaric or conventional weapon system, even though this weapon system can obviously create a lot of injury and destruction,” he told Euronews Next.

“A nuclear weapon is something that truly destroys all life in the place where it was used. We’re talking about the power that is multiplied by several tens”.

ICAN, the winner of the Nobel Prize in 2017, denounced the invasion of Ukraine on Sunday, describing it as Vladimir Putin’s “dangerous game”.

“President Putin is playing a dangerous game by placing nuclear weapons on combat alert. Our campaign strongly condemns this action and we call for an immediate ceasefire, as well as the withdrawal of Russian forces from Ukraine,” Collin said in a statement sent to the AFP.

“The world is approaching a nuclear catastrophe, so we urge all nuclear-weapon states to remove their arsenals from alert status and refrain from threatening to use their arsenals,” he added.

ICAN has stressed that “any use of nuclear weapons would cause catastrophic humanitarian suffering and the fallout – radioactive, economic, political, will be harming people for generations”.

Post Views: 115
Previous Ukraine: Russian space chief suggests ISS could crash into US or Europe as a result of sanctions
Next Serbia’s Days of Hedging Between the EU and Russia Might Be Over