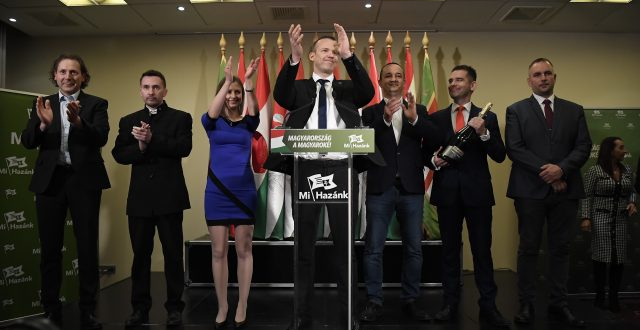 Our Homeland won six per cent of the popular vote in Hungary’s April election; experts say it represents both a risk and an opportunity for Viktor Orban.

In calling for the 1920 Treaty of Trianon – which stripped Hungary of two-thirds of its territory and half of its population – to be repealed, the official manifesto of the far-right Hungarian party Our Homeland might sound a little unrealistic.

But it still won the votes of more than 300,000 Hungarians in a parliamentary election this month that returned Viktor Orban and his national-populist Fidesz party for a fourth successive term.

Party leader Laszlo Toroczkai has called the rise of Our Homeland, from its founding four years ago to a party in parliament, “a miracle, but only the beginning.”

“We want to save Hungary and restore its former glory,” he said on the eve of the election.

It’s the kind of glory, however, that makes many shiver.

Openly anti-Roma and anti-Semitic in its rhetoric, Our Homeland wants the United Nations to pay reparations for Hungary’s post-World War One losses and makes plain it is open to border changes in the region, “when the international situation changes”.

Experts, however, say it is not thirst for a Greater Hungary that drove six per cent of voters to Our Homeland, but the party’s channelling of public frustration over COVID-19 restrictions and anti-vaxxer sentiment.

Those restrictions have been lifted, but few see Our Homeland as just a flash in the pan.

Toroczkai “wants to build himself up; he will insist that Fidesz is just a cynical party, not representing the true national interests,” said Bulcsu Hunyadi, a senior analyst at the Budapest-based think-tank Political Capital.

“The party will fight against both the government and opposition as they try to establish themselves as a third force. I also expect them to push Fidesz further to the right.”

Abel Bojar, senior analyst at 21 Research Centre, which specialises in social research, said the party has the potential to grow. “If a major economic crisis hits the country, some of the government’s swing voters can be lured away by Our Homeland, which can be a risk for Fidesz,” he told BIRN.

Support base in voters of old, radical Jobbik
Our Homeland’s ideological roots are in Jobbik, a former far-right party that moved centre-right in an effort to broaden its base.

Toroczkai, then a member of Jobbik, opposed the reorientation and was expelled along with a handful of diehard nationalists with whom he founded Our Homeland in 2018.

Bojar said that, according to research by 21 Research Centre, Our Homeland’s voters are “demographically similar to the voters of the old, radical Jobbik.”

“They mostly live in smaller settlements, they are young, with a lower level of education and with male voters clearly in the majority,” he said.

Most support the illiberal direction Orban has taken the country in, but are frustrated with the level of corruption in the governing elite, and with the way the government tackled the COVID-19 pandemic.

“There is a layer in every society which is open to conspiracy theories and antivaxxer, anti-COVID ideology,” said Hunyadi.

“Our Homeland offered a haven for these people who were neglected by all other parties, and systematically built up a successful campaign against COVID-related restrictions.”

Laszlo Toroczkai, 44, is a firebrand nationalist who, in his twenties, organised paramilitary groups to intimidate and hunt down Roma in rural Hungary and regularly got into fights.

He toured neighbouring countries calling for the restoration of Hungary’s pre-WWI borders and was banned from entering Slovakia, Serbia, and Romania for years.

Disenchanted by democracy, which he sees only as a conspiracy of freemasons and global financial circles, Toroczkai even advocated – unsuccessfully – the restoration of the Kingdom of Hungary in 2006.

That year, he shot to national prominence when he led a violent mob in the storming of Hungary’s public television building and later, in 2015, made headlines in international media as the staunchest anti-migration figure in Hungary.

As mayor of the southern Hungarian village of Asotthalom since 2013, Toroczkai was one of the first politicians to demand a border fence to stem illegal border crossings and, at the height of the refugee crisis in 2015, issued a local decree banning burqas and chadors and any mosque construction. No mosque was ever planned and burqas are not a common site in Asotthalom.

Test lab for Orban?
Some experts believe the party could serve as the perfect test lab for Orban to fish for topics and test how far to the right Hungarian society is willing to do.

Take gender issues, for example: it was mother-of-four Dora Duro, deputy leader of Our Homeland, who demonstratively shredded the children’s book Fairyland is for Everyone in 2020.

Duro’s much-publicised performance catapulted the book onto the bestseller lists but also drew the attention of Orban’s government to gender issues.

Two months later, Fidesz lawmakers tabled a bill that would effectively ban same-sex couples from adopting children and enshrine in the constitution that “the mother is a woman and the father is a man”.

The campaign reached its peak in the summer of 2021, when parliament approved a controversial child protection act that purported to protect children from sexual propaganda and content concerning gender reassignment and conflated homosexuality with paedophilia.

“Just like with the migration issues, the far right is the initiator, but Fidesz is effectively co-opting these issues,” said Bojar.

“I expect that the attacks on sexual minorities will remain an integral part of the government’s agenda, and they can count on the support of Our Homeland.”

Claiming that Roma will constitute a majority in Hungary by 2040-2060, the party calls for curbs on the community’s “irresponsible reproduction” through the creation of a Family Planning Authority.

On law and order, Our Homeland advocates sending prisoners to labour camps, reinstating the death penalty and enrolling children in national youth movements to burnish a sense of national identity.

Media is also a battleground. To restrict the influence of foreign-owned social media platforms, the party says a Hungarian social media outlet should be created. Facebook repeatedly banned Our Homeland’s page during the election campaign, while a previous attempt to found a Hungarian alternative – Hundub – failed dismally last year.

On the EU, the party’s manifesto may find fans among Eurosceptic members of Fidesz, like parliament speaker Laszlo Kover.

Our Homeland anticipates that by 2029, Hungary could become a net contributor to the EU budget and should therefore hold a referendum on whether to leave. “We either change the EU from inside, or we should leave it,” the manifesto reads.

Such an approach is not entirely absurd to some members of Fidesz. Even Finance Minister Mihaly Varga, seen as the least ‘political’ figure in Orban’s cabinet, conceded in an interview last year that the question of EU membership may take on a different hue by the end of the decade.

“In the current economic situation, I think Orban will need to make gestures to the EU, to receive funding, so Our Homeland can become a full-fledged Eurosceptic party in the parliament, fighting both the government and the opposition,” said Bojar.

“But Orban can even benefit from their presence, claiming that he is in the political centre in Hungary, with worse alternatives in store.”