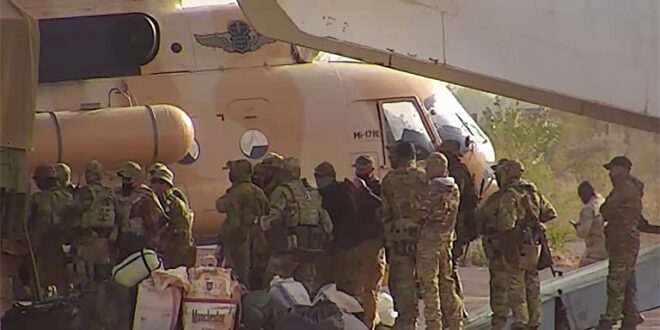 Taking Stock of the Wagner Group’s Expanding Footprint in Africa

The Wagner Group, a Russian private military contractor (PMC) that has been active from Syria to Ukraine, has continued to branch out globally, deploying troops to numerous countries in North and sub-Saharan Africa.

Russia uses the Wagner Group in Africa to help achieve its foreign policy objectives and gain access to countries endowed with minerals, precious gems and metals, or other valuable extractive resources.
The Wagner Group is not a “typical” mercenary outfit; its capabilities extend beyond kinetic means to include sophisticated disinformation campaigns, fake polling results, and efforts to dissuade protestors.
To date, it remains to be seen just how much, and to what extent, Russia’s poor military performance in Ukraine will impact the Wagner brand throughout Africa.

The Wagner Group, a Russian private military contractor (PMC) that has been active from Syria to Ukraine, has continued to branch out globally, deploying forces to numerous countries in North and sub-Saharan Africa. To date, Wagner mercenaries have been active in Africa across the Central African Republic (CAR), Libya, Madagascar, Mali, Mozambique, and Sudan. Wagner may also be looking to expand into Burkina Faso, Nigeria, and Ethiopia. In recent weeks, Wagner’s activities in sub-Saharan Africa have made international headlines. First, France exposed a Wagner plot to frame French soldiers for atrocities committed by Wagner mercenaries in Mali. The French military released videos detailing what it said was evidence of Wagner contractors burying bodies adjacent to the Gossi military base in northern Mali. Roughly a dozen bodies were buried in a mass grave while the mercenaries filmed the scene. Subsequent social media postings on Twitter attempted to blame France for the atrocities. Second, just last week, the al-Qaeda-linked Jama’at Nasr al-Islam wal Muslimin (JNIM) claimed that it was holding a Russian mercenary hostage after capturing him near the Segou region, a mountainous area located in central Mali.

Russia uses the Wagner Group, which is not an official organ of the Russian state, to help achieve its foreign policy objectives and gain access to countries endowed with minerals, precious gems and metals, or other valuable extractive resources including oil, uranium, and manganese. In some cases, Wagner forces are used to provide security around gold or diamond mines, or to secure access to and provide security at maritime ports. And since the Wagner Group is a PMC, Moscow still has plausible deniability when the mercenaries commit atrocities, which the Kremlin distances itself from through obfuscation, disinformation, and blatant falsehoods. Wagner has been active in both CAR and Sudan since 2015, where the mercenaries have served as a cut-out or front operation for Russian security assistance and counterterrorism training. Several years later, in 2019, Wagner forces were sent to prop up the failing campaign of Libyan warlord Khalifa Haftar to take over control of the country, an effort that continues to struggle on. When Wagner forces deploy to Africa, it is typically to help back autocratic leaders or dictators who need help maintaining their grip on power. In addition to the official militaries of certain African states, Wagner has also provided training to pro-government militias and other violent non-state actors.

The Wagner Group is not a “typical” mercenary outfit, and its capabilities extend beyond strictly kinetic means. Wagner has developed sophisticated disinformation campaigns throughout Africa, which include fake polling results and campaigns used to dissuade protestors and demonstrators from speaking out against the host-nation government. Russia has attempted to spread its influence throughout Africa by soft power means, as well, initiating Russian cultural and language programs in a throwback to Moscow’s Cold War playbook. But beyond its willingness to wage a no-holds barred campaign to intimidate civilians and prop up unpopular dictators, it remains unclear how skilled Wagner forces are. By most accounts, they remain a subpar fighting unit, as evidenced by their performance against U.S. troops in Syria in February 2018, when an estimated 300 Wagner mercenaries were eliminated in mere hours.

To date, it remains to be seen just how much, and to what extent, Russia’s poor military performance in Ukraine will impact the Wagner brand throughout Africa. For the most part, African leaders know what they are getting when Wagner is signed to a contract—military support with no strings attached. In mid-December, the European Union enforced sanctions, asset freezes, and travel bans against members of Wagner in response to accusations of egregious human rights violations allegedly committed by the mercenaries in CAR, Libya, Syria, and Ukraine. More comprehensive sanctions have been enacted since late February following Russia’s unprovoked invasion of Ukraine. With Russia reportedly losing 15,000 troops on the battlefield over the first two months of the war, Wagner mercenaries are being relocated from various countries abroad to Ukraine, to make up for Moscow’s manpower shortage. If Wagner forces are pulled from battlefields in Africa, while at the same time the U.S. and France continue to draw down forces in areas like the Sahel, it could very well provide jihadist groups like JNIM and several Islamic State branches in sub-Saharan Africa with opportunities to fill the power vacuum, continuing the vicious cycle of instability in several already weak and fragile states.

Mali on Tuesday received military jets and a combat helicopter from Russia. During a ceremony, …