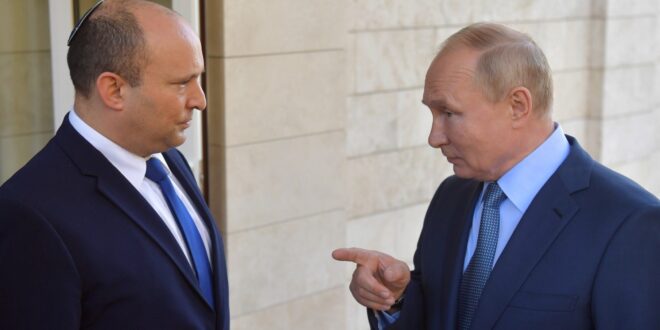 Report on “Withdrawal of Russian Troops” from Syria; Israel Watching “with Concern”

Russian media reported on a “withdrawal of Russian troops” from Syria, a move linked to the repercussions of military operations in Ukraine. To date, Moscow has not officially confirmed the withdrawal.

“Russia has begun the process of withdrawing some troops from Syria to help strengthen its forces in Ukraine,” the Moscow Times reported.

According to the report of the independent newspaper, which is based in the Netherlands: “Many military units have been transferred from bases across the country to three Mediterranean airports, where they will be conveyed to Ukraine.”

“The bases, now abandoned, have been transferred to the IRGC, as well as to the Lebanese group Hezbollah,” the report said.

The reported developments were quickly picked up in Israel, which has been very sensitive for many years about Iran’s presence in Syria. This prompted Israel to carry out sporadic air strikes on positions inside Syria.

According to a report by the Israeli Broadcasting Corporation on Monday morning, Israel’s security services are “carefully monitoring the withdrawal of Russian troops from Syria.”

According to the radio report, Israel is examining the accuracy of information about the transfer of a large number of Russian troops from Syria, especially after the publication of reports in the Russian media. Despite this, it is estimated that Moscow still has deployed a few thousand troops in Syria, including at 12 bases and military sites.

According to the Hebrew report, Israel fears that Iranian soldiers or pro-Iranian militias will be installed in Russian-held positions in Syria.

These Israeli concerns come despite the 2015 military agreement between Israel and Russia on Syria.

Under the agreement, military coordination between the two nations aims to avoid friction or air battles, especially since Israeli warplanes carry out raids and attacks in Syria against Iranian positions and what Israel calls “arms convoys” through Syrian territory to Lebanon, and then to Hezbollah.

In October, Israeli media reported that President Vladimir Putin and Israeli Prime Minister Naftali Bennett agreed at the end of Bennett’s visit to Moscow “to continue Israel’s existing policy of freedom of action in Syria.”

“The discussion reiterated the model of continuing the relationship on a new level.”

Since the Russian war on Ukraine began, however, many observers and officials in Moscow and Israel have indicated a “change” in the nature of Israel’s activity in Syria.