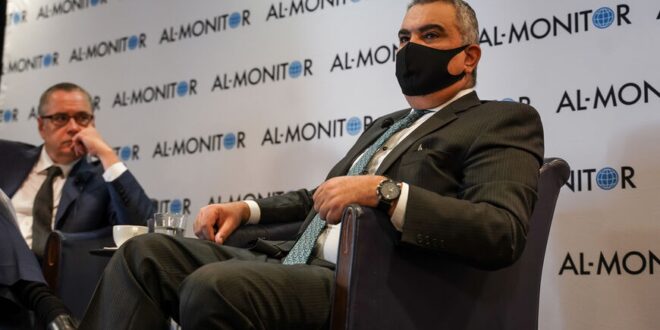 Speaking at an Al-Monitor event in Washington, Motaz Zahran also addressed human rights issues and a plan to supply energy to Lebanon.

The Egyptian envoy also spoke on Cairo’s concerns about the next filling of Ethiopia’s giant hydropower dam, a regional gas deal with Lebanon, and other topics.

“If you want me to characterize the [US-Egypt] relationship, I would simply say it’s a strategic relationship,” Zahran said, pointing to cooperation over security, intelligence sharing and the economy. “We look at these pillars as cementing the relationship from deviating into areas that are not necessarily conducive to a better atmosphere.”

On the campaign trail, Joe Biden vowed “no more blank checks” to Egypt because of human rights concerns.

Once in office, Biden was forced to balance his campaign promise of a human rights-centered foreign policy with Egypt’s cooperation on regional security.

Biden credited Egyptian President Abdul-Fattah Al-Sisi with brokering a May 2021 ceasefire that ended an 11-day war between Israel and Hamas. Egypt also provides American warships expedited access through the Suez Canal and grants overflights for US military aircraft.

Egypt was the first Arab country to sign a peace treaty with Israel in 1979.

The Biden administration welcomed the launch of Egypt’s human rights strategy in September 2021, as well as the recent lifting of its years-long state of emergency.

Human rights is raised regularly in discussions between US and Egyptian officials at the highest levels, said Zahran, and as part of the US-Egypt strategic dialogue.

Some human rights advocates nonetheless question whether the 78-page strategy will bring about meaningful reforms as government critics continue to be detained.

Pre-trial detentions account for “most of our problems in Egypt when it comes to human rights,” Zahran said. Citing recent prisoner releases, the ambassador said progress has been made since last year’s adoption of the country’s first-ever national strategy for human rights.

“The strategy itself has been extremely impactful in terms of keeping things in the right perspectives,” Zahran said. “Benchmarks here are not necessarily benchmarks there.”

Zahran pushed back on criticism that the promised reforms are mere window dressing.

“There’s recognition here in Washington that all this that is happening in Egypt is an all-Egyptian endeavor to upgrade the society in Egypt in a way that caters to the people,” he said.

Egypt is the second-largest recipient of American military aid dollars after Israel.

Members of Congress have sought to limit arms sales to Egypt over human rights concerns.

Asked Tuesday about Cairo’s years-old request to buy F-15 fighter jets from Washington, Zahran said only that the fighters were “under discussion.”

US should use leverage on Ethiopia in Nile Dam talks

On the negotiations over the Grand Ethiopian Renaissance Dam (GERD), Zahran said that if the talks remain stalled, “you can expect anything. You will have a situation whereby Egypt will have to look into all its options.”

“What is for sure,” he added, is that Egypt will continuously “stick to its diplomatic options.”

Zahran explained that any threat to the Nile waters, on which Egypt depends for over 90% of its needs, is “existential,” and appealed to Washington to help break the deadlock.

He referred to intransigence and obstruction of the diplomatic process, apparently by Addis Ababa.

“We need to see a proactive US that is able to shepherd the process towards … an agreement that is mutually agreed to and that is legally binding, and that has a conflict resolution mechanism embedded in it,” added Zahran.

Energy plan for Lebanon awaits US clarity on sanctions waiver

Egypt is ready to export natural gas to Lebanon , via Syria, but is still waiting for assurances from the Biden administration it will not fall subject to sanctions on Syria for doing so.