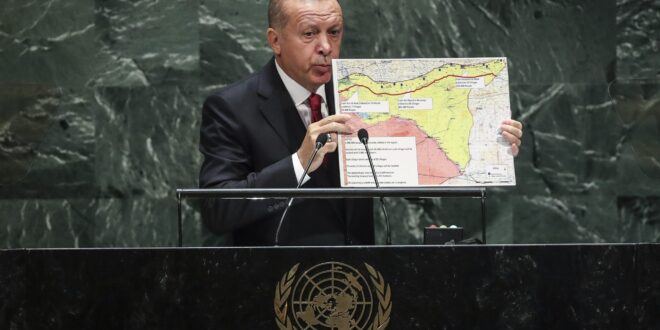 A “Safe-zone” for a million Syrian refugees to return to. That’s the plan Turkish President Recep Tayyib Erdogan has promised to implement, only a year before the next Turkish general elections. In fact, and as the presence of more than 3 million Syrian refugees in Turkey continues to cause controversy in the country, the promise of returning them safely to Syria is quite successful among the general public, especially since it would also push Kurdish groups 30 km away from the borders. Erdogan’s plan, however, requires the establishment of a safe zone with international guarantees.

According to the Pan-Arab news website al-Araby al-Jadeed, Ankara is hoping that NATO could provide protection for its safe zone, and is threatening to block Sweden and Finland’s bid to join the alliance if it does not get what it wants. “Turkey will now benefit from a clause in NATO’s rules of procedure that indicates that all members should agree to any new country joining NATO, which will strengthen its position by imposing its demand for a fait accompli, particularly with recent international developments imposed by the Russian invasion of Ukraine, and the West’s fears of more ambitions for President Putin and Moscow in Europe”.

However, pro-regime circles are accusing Erdogan of attempting to change the demographic makeup of northern Syria. The pro-government newspaper al-Watan has in fact claimed that Erdogan’s plan involves building several housing units to settle one million Syrian refugees there after Turkey has abandoned the local population and stolen their property. In addition, it says that the Turkish “regime” has asked its local “mercenaries” (In a reference to the Syrian national army factions) to confiscate the properties of expatriates in northern Syria in order to go through with this plan.

Even the Foreign and Expatriates Ministry in Syria has decried the plan, calling it a War crime and even a crime against humanity, according to the official agency SANA. “The Ministry stressed that Syria’s sovereignty, independence, safety and territorial integrity should not be a blackmail and negotiation card between a radical political regime that rules Turkey and threatens regional and international peace and security, and the colonial NATO, which seeks, irresponsibly, to expand the circle of conflict to extend to this region of the world”, Damascus said. The Head of the Arab, Foreign and Expatriate Affairs Committee in the People’s Assembly, Boutros Marjana, echoed these accusations, calling Erdogan’s plan “illegal” in a statement to al-Watan. “The Russian ally stands by Syria, just as the Iranian ally, and we do not forget China if we are talking about the political aspect of this matter. The Security Council cannot pass or approve such a project, and what is going on is nothing more than an attempt at blackmail,” he said.

As the debate on the safe zone rages, the opposition website Syria TV has published that a recent meeting took place between Kurdish and regime officials in Damascus. “A PKK delegation led by Sabri Awk recently visited Damascus and met with Ali Mamlouk, a senior security official in the Syrian regime’s intelligence service. They discussed the situation in areas under the PKK’s control in western Kurdistan and Aleppo,” the source close to the Democratic Union Party (PYD) told Basnews. Both the regime and Kurdish parties see the establishment of a safe zone as a threat.