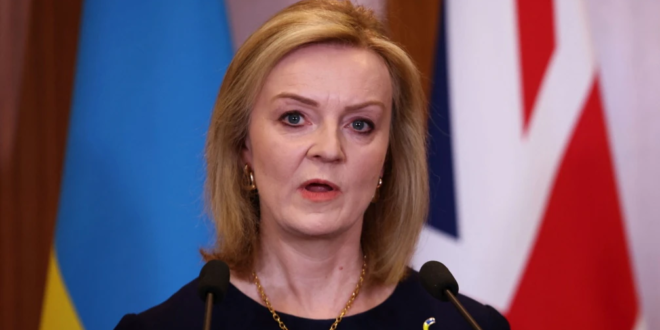 Britain’s Truss Says Moldova Should Be ‘Equipped To NATO Standard’

British Foreign Secretary Liz Truss says Moldova should be “equipped to NATO standard” to protect itself against potential Russian aggression.

In an interview with The Telegraph published on May 21, Truss said talks were under way with allies about how to help smaller countries defend themselves, given Russian President Vladimir Putin’s “ambitions to create a Greater Russia.”

She said the aim was to ensure Ukraine is “permanently able to defend itself,” and this also applies to other “vulnerable states” such as Moldova, which is also not a member of the NATO alliance.

“What we’re working on at the moment is a joint commission with Ukraine and Poland on upgrading Ukrainian defenses to NATO standard,” Truss told The Telegraph.

Pressed on whether she wants to see Western weaponry and intelligence provided to Moldova, Truss said: “I would want to see Moldova equipped to NATO standard. This is a discussion we’re having with our allies.”

Asked if this is because Russia poses a security threat to Moldova, she said: “Absolutely. I mean, Putin has been clear about his ambitions to create a Greater Russia.”

The Telegraph quoted an aide as saying “NATO standard” would involve members of the alliance supplying modern equipment to replace gear from the Soviet era, and providing training in how to use it.

Moldova and its tiny breakaway region of Transdniester share a roughly 1,200-kilometer border with Ukraine and fears of a spillover have intensified since Russia’s full-scale invasion of Ukraine began in late February.

Earlier this month, European Council President Charles Michel promised to boost military aid to Moldova, whose Moscow-backed separatist region of Transdniester has reported several incidents that led to accusations Russia is seeking to destabilize the former Soviet republic and possibly involve it in its war against Ukraine.

Post Views: 143
Previous UN Resolution 181 must be repealed: The creation of Israel and the partition of Palestine was a terrible mistake
Next Occupied Ukrainian Territories Switch to Russian Area Code – State Media