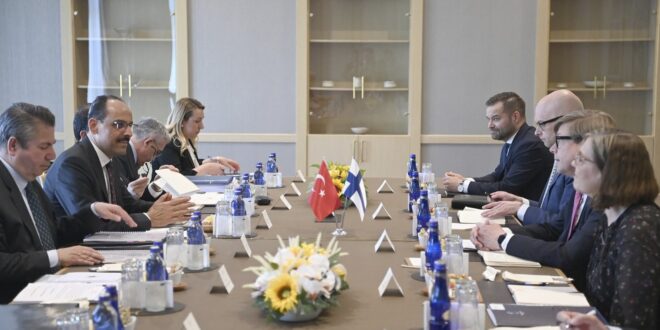 The ball is in court of Sweden and Finland on terrorism

Russia’s attempt to invade Ukraine turned Europe’s perception of security upside down. Countries that have pursued a pacifist and neutral foreign policy for years are on the alert now. Among them are Sweden and Finland. These two countries quickly found a solution against Russian aggression by entering under the umbrella of NATO.

However, it did not take long for them to realize that things would not progress as quickly and easily as they expected. President Recep Tayyip Erdoğan’s statement that “if Sweden and Finland do not take steps in the fight against terrorism, there will be no membership” echoed in many capitals, and it still echoes.

At first, the explanations came from the West, which escaped to the “cancellable” convenience. But Erdoğan’s steadfast standing behind his statement and his uncompromising approach despite all the pressure once again exposed the Western leaders.

In the beginning, the statements “we understand Turkey’s security concerns” came one after the other. The race to “understand Turkey” reached its peak with the message “we need to sit down with Turkey” from NATO Secretary-General Jens Stoltenberg. And finally, the Finnish and Swedish delegations made their way to Ankara, despite Erdoğan’s saying “don’t bother coming.”

First of all, the foreign press has said that Sweden’s relationship with terrorist organizations is more prominent than Finland’s in Ankara’s eyes. This is exactly why I want to open a special parenthesis for Finland.

When you add up the border lengths of NATO member countries with Russia, you can see that it is 115 kilometers (72 miles) shorter than the Finnish-Russian border. The possibility of Finland’s entry into NATO, which has a total border of 1,340 kilometers, worries Russia even more. However, since Sweden’s support for the PKK and Gülenist Terror Group (FETÖ) terrorism duo is much greater, neither why we are against the possibility of Finland’s membership in our country nor our demands were expressed much.

Although Finland does not openly sponsor the PKK like Sweden, there is a problem between the two countries within the scope of extradition. Let me also remind you: Finland, like Sweden, was one of the countries that stopped military exports to Turkey and imposed an embargo during Operation Peace Spring, which we started in 2019 to clear the PKK/YPG elements in Syria, during Antti Rinne’s prime ministry in Finland.

However, it must be admitted that another feature that distinguishes Finland from Sweden is their knowledge of the art of diplomacy. Because instead of making harsh statements like “strong countries are behind us, it would be in Turkey’s interest to recruit us” like the Swedish foreign minister, they displayed a more conciliatory attitude.

Finnish Foreign Minister Pekka Haavisto, for example, confined himself to saying that “Finland’s record of fighting against terrorism is discussed and it is hopeful” in a phone call between the presidents of Finland and Turkey. He also pointed out that his country can give assurances to Turkey that the links of the PKK terrorist organization will be monitored more closely, adding: “We can certainly give such guarantees to Turkey. Since the PKK is considered a terrorist organization in Europe, it’s in order not to allow terrorist activities in Finland, too. It is important that we do our part,” he added.

On the other hand, as Erdoğan said, Turkey needs to see concrete steps taken rather than diplomatic statements. In this respect, Finland should also listen to the rightful demands and fulfill them, without being deceived that the chances of being accepted to membership appear to be more than Sweden. Because you can’t both want to be under the most comprehensive security umbrella of which a country is a member and ignore that country’s national security demands.

The recent delegation meetings in Ankara were the first leg of a long-term shuttle diplomacy in which Stoltenberg was expected to participate in the future. What Turkey wants, what it objects to and its stance are clear. Now the ball is in the court of Sweden, Finland and the West.

Post Views: 190
Previous The New Face of the Islamic State in Southeast Asia
Next The Backstory Of The Great Reset, Or How To Destroy Classical Liberalism