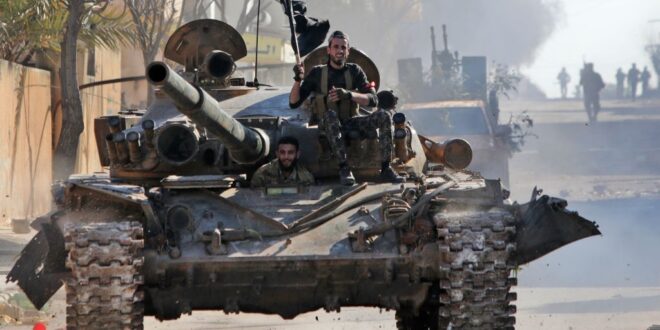 Turkey, reportedly on the verge of yet another military incursion into Syria, appears up to other fun and games as well.

The so-called “terrorists” to whom Erdoğan is referring are Kurdish politicians, political activists, and refugees who live in Sweden and Finland. In particular, those who engage in advocacy for political equality and the official recognition of Kurds in Turkey and Syria. The Turkish government wants the two Nordic nations to extradite these individuals to Turkey.

Erdoğan’s regime, however, does not see actual jihadists in the region as terrorists and even actively supports them. For instance, news outlets have documented evidence of Erdoğan’s government’s close relationship with ISIS (the Islamic State).

Turkey’s Islamist allies in Afrin have since committed many crimes against civilians, including Christians, Yazidis and Kurds. These crimes include extortion, detention, abduction, rape, torture and murder.

For NATO’s well-being, Turkey’s threats, aggression and blackmail must not be allowed.

Turkey, reportedly on the verge of yet another military incursion into Syria, appears up to other fun and games as well.

However, one NATO member, Turkey, said it is opposed to their NATO membership based on their alleged support of “terrorism”. On May 25, delegations from Sweden and Finland arrived in Ankara, seeking to address Turkish objections to their joining the military alliance.

“Turkey could not have a positive view on Sweden and Finland’s NATO membership so long as these countries did not show that they would be in solidarity with Turkey concerning fundamental issues, combatting terrorism in particular,” Turkey’s President Recep Tayyip Erdoğan told NATO Secretary General Jens Stoltenberg.

In a telephone call with Sweden’s Prime Minister Magdalena Andersson on May 21, Erdoğan had said that “the political, financial and weapon support Sweden had been providing to terrorist organizations should be brought to an end.”

Erdoğan added that “Turkey expected Sweden to take concrete and serious steps that showed it shared Turkey’s concerns over PKK terrorist organization and its extensions in Syria and Iraq.”

Erdoğan also spoke by phone with Finland’s President Sauli Niinistö and said that “a mentality that disregarded terrorist organizations which posed a threat to an ally within NATO would not comply with the spirit of alliance and friendship.”

“Our approach to NATO’s enlargement,” Erdoğan announced on May 23, “originates from our principled stance on combatting terrorism.”

The so-called “terrorists” to whom Erdoğan is referring are Kurdish politicians, political activists, and refugees who live in Sweden and Finland. In particular, those who engage in advocacy for political equality and the official recognition of Kurds in Turkey and Syria. The Turkish government wants the two Nordic nations to extradite these individuals to Turkey.

Sweden and Finland also have shown no opposition to Kurdish fighters in Syria and Iraq, who are US allies and have effectively fought against ISIS. Erdoğan’s regime nevertheless labels these fighters as “terrorists” and wants the West to combat them.

Many citizens of Turkey have also sought political asylum in Sweden and Finland since Erdoğan’s government began cracking down on the actual (as well as supposed supporters) of Fethullah Gülen, a Muslim former ally of Erdoğan who lives in the US, for allegedly organizing the 2016 coup attempt. Turkey has also declared so-called Gülenists as “terrorists” and asked these two governments for their extradition as well. Turkish media reported on May 16 that, according to the Justice Ministry, “Sweden and Finland rejected Turkey’s request for the extradition of people with links to the PKK [Kurdistan Workers’ Party] and Gülenist Terror Group (FETÖ).”

Erdoğan’s regime, however, does not see actual jihadists in the region as terrorists and even actively supports them. For instance, news outlets have documented evidence of Erdoğan’s government’s close relationship with ISIS (the Islamic State). This includes their use of Turkish territory to travel to Iraq or Syria and having trade relations with Turkey. On June 29, 2016, The New York Times reported:

In a 2020 essay, the historian Professor Mordechai Kedar detailed Turkey’s cooperation with ISIS:

Turkish contributions to ISIS, Kedar wrote, were most apparent in areas such as finances, volunteers and tactics:

The government of Turkey also supports jihadists in Syria. Turkey has occupied parts of northern Syria, including Afrin and Idlib, through local jihadist groups. The Kurdish People’s Protection Units (YPG) — which forms an integral part of the US-led fight against ISIS but which the Turkish government lists as a “terrorist organization” — took control of Afrin after Syrian government forces withdrew from the city in 2012. A de facto autonomous Kurdish rule was then declared. In 2015, a US ally group, the Syrian Democratic Forces (SDF), of which the YPG is a member, was formed.

Turkey’s “Operation Olive Branch” against Afrin began on January 20, 2018, and concluded on March 18, 2018, with the defeat of the YPG at the hands of the Turkish military and its Islamist auxiliaries. Turkey’s Islamist allies in Afrin have since committed many crimes against civilians, including Christians, Yazidis and Kurds. These crimes include extortion, detention, abduction, rape, torture and murder. Investigative journalist Jonathan Spyer has documented some of these crimes. “[US] State Department, UN and NGO reports cite a pattern of grave human rights violations, assaults and targeting of women,” he wrote.

Meanwhile, Turkey is reported to be the power behind Al-Qaeda affiliates in Idlib such as the Hayat Tahrir al-Sham (HTS or the “Organization for the Liberation of the Levant”). According to the Center for Strategic and International Studies:

A 2021 study by the Middle East Institute details how Turkey and HTS are co-occupying and exploiting parts of northwest Syria:

In January 2018, the Watad Petroleum Company was formed in HTS-occupied northwest Syria and granted exclusive rights to import oil derivatives and gas from Turkey into the area. In June 2020, HTS began replacing the Syrian pound with the Turkish lira (TL), indexing the prices of goods to the lira. The Turkish government, through its massive economic support to the group, thereby became a lifeline for the jihadist HTS.

Meanwhile, on April 25, the Turkish media reported that Mehmet Salih Kölge — a mass murderer and member of the Turkish Hezbollah — has been released from prison. Between 1999 and 2001, Kölge, whose trial lasted for six years, had participated in interrogations using torture. Turkey’s Court of Cassation stated in its ruling that he had been responsible for killing 91 citizens in 157 armed activities and given orders for operations that caused injuries to 66 people.

Kölge, who had previously been sentenced to aggravated life imprisonment, had also been granted release from prison earlier, before the local elections on March 31, 2019.

On May 13, the Turkish media reported that Turkey had additionally released from prison three more murderers, previously sentenced to aggravated life imprisonment for involvement in killing 28 people, wounding 14, kidnapping 1 and burning 4 vehicles in 48 armed actions on behalf of Turkish Hezbollah.

Currently, Turkey’s military invasion of Iraq and its Kurdistan Region, which Turkey has named “Operation Claw-Lock”, has escalated. Yazidis, Kurds, and Assyrians are all being seriously affected by Turkey’s military actions in Iraq. The media report that at least five people were killed and more injured in two separate Turkish air strikes on Iraqi Kurdistan on May 21, one of which targeted a UN-administered refugee camp in Makhmour.

Repeated attacks by Turkish war planes in Iraq — including the Yazidi homeland of Sinjar — have prevented Yazidis who were forcibly displaced by ISIS in 2014 from returning home. According to a 2021 report by the Assyrian Policy Institute:

Meanwhile, the Turkish government keeps threatening Greece, another NATO member, over Greek islands in the Aegean. Turkish Foreign Minister Mevlut Cavusoglu told reporters on May 26 that Greece must withdraw its military from its Aegean islands. “We are not bluffing. If Athens does not comply, we will take matters further,” Cavusoglu said, adding that Ankara is prepared to challenge Greek sovereignty over the islands.

Although NATO’s official website claims that NATO “promotes democratic values” and “is committed to the peaceful resolution of disputes,” for decades, the Turkish government’s actions have only brought death and destruction to countless people, both within the country and outside it. For NATO’s well-being, Turkey’s threats, aggression and blackmail must not be allowed.