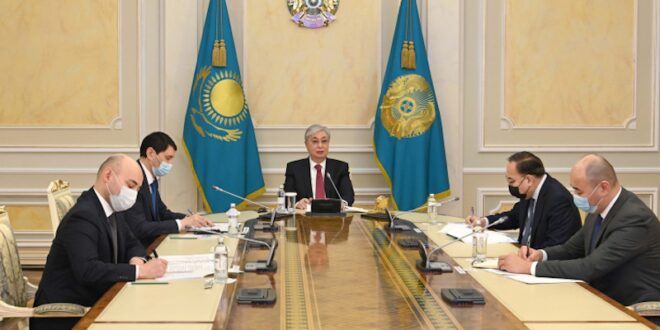 Kassym-Jomart Tokayev, in an exclusive interview with Mir Interstate Television and Radio Company on May 1, 2020, that is, a little over a year after he had assumed the presidency of his country, recounted – not without some pride at the results achieved – how Kazakhstan was managing to keep balance between the East and West. Put another way, in this case the republic’s second president and hand-picked successor of Nursultan Nazarbayev, expressed his readiness to continue to pursue a foreign policy of good relations both with the US and the EU, and with major neighboring powers. Yet this proved not to be destined to last for long. At the beginning of this year, it became already clear that Kazakhstan, according to Forbes.ru columnist Alexander Baunov, started losing its balanced position between the East and West. Why has all that changed so quickly? So let’s try to figure it out.

Under new leadership, Kazakhstan, just as before, would have wanted to go on to remain friendly to the West and Russia at the same time, avoiding the danger of getting caught up in the turbulence of their confrontational relations. Yet the rules of the international game have been and are being, as is known, set by the major powers, and it is precisely on their behavior that the answer to the question of whether or not the order which has been formed in a particular region will further remain the same depends. So it seems to be not surprising that with the confrontation between Russia and the West grown to reach its current level, starting with the events of August 2020 in Belarus, efforts to proceed further on this road began doing Kazakhstan more harm than good.

This has been particularly evident since the beginning of this year. In Kazakhstan itself, the events of January 2022 have been characterized as a result of attempts by external forces to destabilize the situation in the country. It has been five months since then. Kazakhstani citizens have never been told who exactly they were.

Answering questions from journalists on June 5, Kassym-Jomart Tokayev said that the January unrest was a well-planned operation against statehood. Asked about the investigation, he noted that the process continues and all involved would be brought to justice. This is all that is known at this time. But there are still many things what Kazakhstani public would like knowing.

In Turkey, there is an opinion that a certain imperial force was behind these events. That is, one of the great powers. But who exactly would that be?! In this respect, there are no particular tips. In Russia, there have been claims that the United States and its Western allies were behind the January unrest.

In the West, the fingers are tended to point at Russia itself in this regard. However, a considerably more important question now is not which of the above two parties was behind the January unrest, or whether they had something to do with those events, but how they now – in a time when economic and geopolitical rivalries between them have risen to an all-time high – may behave toward Kazakhstan.

The war in Ukraine where they face off, so to speak, against one another, as director of the US Defense Intelligence Agency Scott Berrier has said, is at ‘bit of a stalemate’. Such an atmosphere is likely to lead to dangerous temptations, such as attempting to shift the balance of power through expanding the conflict field by drawing another critically important post-Soviet country into it – namely the Republic of Kazakhstan.

Back in 2012, Hillary Clinton, the then US Secretary of State, stated categorically that America was trying to prevent Russia from recreating a new version of the Soviet Union under the ruse of economic integration. “It’s not going to be called that. It’s going to be called a customs union, it will be called Eurasian Union and all of that”, she said. “But let’s make no mistake about it. We know what the goal is and we are trying to figure out effective ways to slow down or prevent it”.

In May 2013, a meeting between the presidents of Russia, Ukraine, Belarus and Kazakhstan was held in Astana in order to see where things stood with the preparation of creating the Eurasian Economic Union (EAEU) which should have been completed in 2015. A few months later, the situation began getting out of Moscow’s control. Euromaidan – the name given to the pro-European protests in Ukraine’s capital, Kyiv – started late on November 21, when up to 2,000 protesters gathered on the city’s central Maidan Nezalezhnosti (Independence Square). What happened after that is a matter of common knowledge. Russia is now at war with Ukraine, and, according to Alexander Lukashenko, the West, in response to this, has been carrying out ‘a full-scale hybrid aggression’ against the Russian Federation and Belarus for its supporting role in Russian invasion of this post-Soviet Slavic country.

So, by now, of the four countries whose leaders in May 2013 were considering a draft treaty on the establishment of the Eurasian Economic Union, Kazakhstan remains only one not involved in the increasingly violent conflict between the West and the East. This fact alone says a lot, doesn’t it?

The only question is how long this situation would last at the time when Kazakhstan is progressively less able to meet the challenge of navigating skillfully between Russia and the West. On the one hand, the Central Asian nation has proclaimed its resolve to maintain his friendly and ally relations with Russia. On the other hand, it is gradually shifting toward the EU and NATO member countries in terms of establishing its further economic and political-military linkages.

Kazakhstan is now not only complying with Western sanctions imposed on the Russian Federation and Belarus, but also, as the Vzglyad business newspaper notes, ‘helping the economy of Russia’s worst enemies, the Baltic countries’ and embarking on the path to strengthen military and technical cooperation with Turkey. As a result, the opinion is prevalent among the representatives of social, political and intellectual circles of Russia, the Russian experts and journalists that the USA and the EU, through Turkey and by using the idea of the ‘Great Turan’, seek to transform Kazakhstan into an analogue of what they turned Ukraine into through promotion of the European perspective, Western values and Western notions of progressive government up there.

And some of them get really nervous saying that not taking necessary preventive action in this regard would be costly to Moscow. They allege that ‘the opening of a second front [against Russia] is imminent: Kazakhstan is weighing its options as to where to hit [us]’, and Moscow must therefore stay ahead of the curve ‘to prevent a repetition of the Ukrainian scenario [in Kazakhstan]’.

Passions in connection with Kazakhstan are inflaming in the West, too. It would be enough to cite the title and subtitle of one of the articles about the subject that were published there to give an idea of what we are talking about here: Russia Squeezes Kazakhstan. The U.S. should curb Moscow’s clout in its highly dependent and oil-rich neighbor. And let’s call things by their right names. There is currently a trend in both the Russian Federation and America, whereby Moscow and Washington are increasingly being pushed to get in a fight over Kazakhstan.

If we put aside confrontational rhetoric in the spirit of the ‘cold war – 2’ on both sides, it is not difficult to see that in this case, the key nexus of conflicts of interest is concealed in the Kazakh oil and gas assets.

Western and Russian interests in this context are, for the most part, contradicting each other and, at the same time, they turn out to be merged in a way that happens with Siamese twins. Kazakhstan’s largest oilfields have been and still are being developed mainly by US and other Western companies. They have to export petroleum hydrocarbons extracted there by pipelines through the territory of the Russian Federation. By and large, both sides seem not be entirely satisfied with this kind of division of the spheres of their interests. But now, the ball’s in the Russian court, as they say. In Russia, there is now talk about the possibility of nationalizing the Caspian Pipeline Consortium (CPC), which currently supplies about 80 percent of Kazakhstan’s exports, as well as 90 percent of the oil produced by foreign consortiums in the Tengiz, Kashagan, and Karachaganak fields to the European market. Today, the point is how Westerners are going to react to this. Now it’s their move.