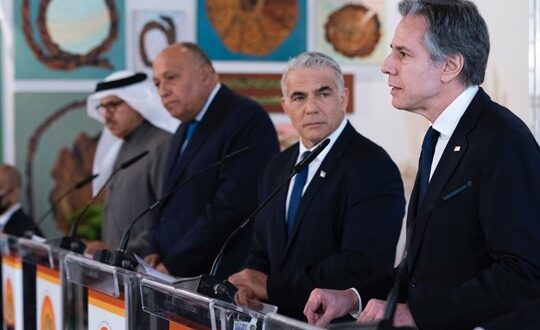 The U.S. Needs a ‘Big Idea’ to Frame Its Middle East Policy

The U.S. hasn’t “quit” the Middle East, notwithstanding the frequent complaints of its regional partners. But Washington has clearly scaled back its engagement in the region, especially in military terms, from its peak during the first decade after 9/11.

This shift in the U.S. role has generated rancorous debate. Washington’s partners in the region complain about feeling abandoned, while its rivals crow about driving the U.S. out of the Middle East. Back in the U.S., many hawks clamor for more military confrontation, particularly with Iran, while those who argue for restraint are willing to tolerate chaos and armed conflict so long as the United States isn’t a direct party to it.

The true story of Washington’s current posture in the Middle East is a little more nuanced than most of those characterizations might suggest and raises important questions with no obvious answers. A thought-provoking essay by Dalia Dassa Kaye, published last week in The Washington Quarterly, frames these questions in a clear-headed way, while offering a proposed pathway that makes a sound foundation for thinking about—or rethinking—U.S. policy in the Middle East moving forward.

In her essay titled, “America’s Role in a Post-American Middle East,” Dassa Kaye argues that the U.S. remains one of the most influential global powers, but should view itself as a “convener of resources” rather than a dominant force. In practice, this means that Washington must focus on catalyzing regional and international cooperation on issues where there is a decent amount of agreement among otherwise fractious governments, such as counterterrorism, nuclear nonproliferation, post-conflict reconstruction and the climate crisis.

Her starting premise, which seems indisputable, is that, while the United States is not “leaving” the region, it will never reprise the large-scale military and political footprint that characterized its presence during the decade after 9/11. And in what she calls a “post-American Middle East,” the United States will no longer be the predominant power in the region, but one of several major players, alongside China and Russia, as well as the many regional heavyweights. Her central claim is that the United States should therefore shift its mindset away from unrealistic, transformative goals like “nation-building” or aiming to fulfil every item on its partners endless security wish lists. Instead, Washington should align the modest level of resources it is willing to commit to the region with the goal of long-term security, which comes not from fulfilling the whims and short-term demands of its authoritarian partners, but from addressing the real drivers of violent extremism, which she correctly identifies as “poor governance and lack of domestic accountability.”

Dassa Kaye’s analysis and recommendations are most compelling in their diagnosis of what’s wrong with the status quo. The Biden administration’s “back to basics” approach, though appropriately less ambitious than that of its predecessors, keeps the U.S. engaged “in all the wrong ways” amid ongoing regional wars and escalating militarization, without gaining Washington any leverage to significantly influence events in the region. In the current setup, Washington is still implicated in all its partners’ destabilizing moves, even as those partners refuse to support the U.S. on any of its key priorities, ranging from the Iran nuclear agreement to the international response to Russia’s invasion of Ukraine and the spike in global oil prices that resulted from that conflict.

The emerging alternative to this small-footprint model—a Cold War-style strategic competition with China for dominance in the Middle East—is even worse, for Washington and its partners in the Middle East, as it would further exacerbate conflict in the region. This approach has nonetheless found support among a growing bipartisan band of hawks in the U.S. who relish the simple motivation of a Manichean contest, regardless of its costs and whether or not it is winnable.

But while Dassa Kaye’s prescription for a better pathway is technically sound, it needs more juice. To avoid a new Cold War or a destructive “Great Game” for the Middle East, Washington needs a more compelling rationale than the convening of scarce resources in pursuit of marginal policy improvements. It needs a good “big idea” to take the place of a terrible one. One possible alternative is to frame policy around justice and accountability, values that sit well with Washington’s declarative policy—if not always its actual behavior—and can form the basis for the types of “do less harm” policies advocated by Dassa Kaye and a growing group of pragmatists. Another possible framing is around governance, which sidesteps the question of whether a government is authoritarian or liberal and instead focuses on whether a state is meeting its basic responsibility of providing its subjects with livelihoods and rights. A third animating principle is “putting people first”—a human-centered policy narrative that has the benefit of working well as a bedrock principle for both domestic and international policymaking.

Other reasonable alternatives no doubt exist. But whatever the positive, constructive, inspiring big idea that can drive U.S. policy in the Middle East ends up being, it must replace the insidious credo of the “global war on terror” years, during which stability was narrowly defined to mean the absence of just one kind of violence—terrorism—while armed conflict in the region skyrocketed overall.

Dassa Kaye’s ultimate recommendation mirrors the findings of a project with which she was involved at the RAND Corporation, titled “Reimaging U.S. Strategy in the Middle East,” which was published in February 2021 and called for downsizing Washington’s expectations of its regional partners, while shifting resources away from military aid.

That report as well as Dassa Kaye’s recent essay are worth reading and considering as the starting point for a revised U.S. strategy in the Middle East, one that sets measured, achievable goals that are consistent with a less militarized and more just vision of U.S. power in the world.

The Islamic State historically escalates its attacks during the holy month of Ramadan. This year was no different, as Al-Monitor reports, with “revenge attacks” by ISIS affiliates carried out in multiple countries, including Afghanistan, Syria, Nigeria, Libya and Uzbekistan. One ISIS attack on an iftar last week in Syria reportedly killed seven people, while attacks by the ISIS affiliate in Afghanistan have reportedly killed at least 100 people. While ISIS has become a secondary concern for many of the countries that joined forces to dismantle its territorial caliphate, the extremist group nonetheless remains a potent force in detention centers in northeast Syria, especially the Al-Hol camp; in rural areas across Iraq and Syria; as well as further afield through its sponsored affiliates.

An expose in The Guardian about the Tadamon massacre details one of the major bloodbaths of the Syrian war. The report, which opens with a trigger warning and makes for disturbing reading, contains details of the mass murder of 41 people in the Damascus suburb of Tadamon in April 2013 by a branch of the Syrian intelligence services. It also tells the remarkable story of the Syrian militiamen who smuggled evidence of the crime out of the country in order to deliver it to genocide researchers. Though painful to read, these accounts illustrate that with help from principled insiders and dogged investigators, even carefully concealed war crimes can be exposed—meaning that their perpetrators can potentially be brought to justice.

Post Views: 137
Previous Libya Will Put Washington’s New Peacebuilding Strategy to the Test
Next The U.S. Must Raise the Stakes for Sudan’s Coup Leaders