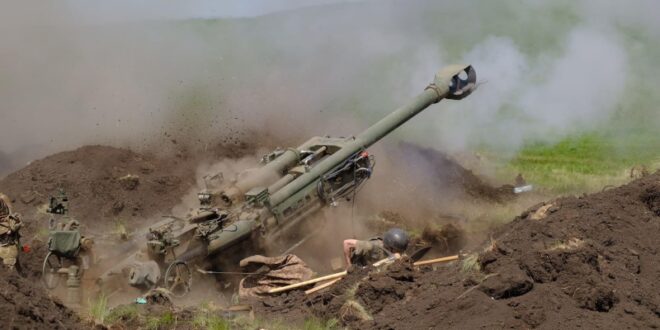 Ukrainian forces are suffering painful losses in the fight against Russian troops in the east of the country as they await the delivery of promised weapons from Western countries, President Volodymyr Zelenskiy said on June 14 in a late-night address.

Ukraine needs modern anti-missile weapons now, he said, adding there could be no justification for partner countries to delay delivery.

“We keep telling our partners that Ukraine needs modern anti-missile weapons,” Zelenskiy said. “Our country does not have them yet at a sufficient level, but it is in Ukraine and right now that there is the greatest need for such weapons. Procrastination in providing them cannot be justified.”

The fiercest battles as before are taking place in Syevyerodonetsk and other nearby towns and communities, he said.

The region has been the scene of a weeks-long battle in the Donbas region and the “losses, unfortunately, are painful.”

Zelenskiy noted that Russia is using Soviet-era missiles, which are less accurate and therefore more threatening to civilian objects and ordinary residential buildings.

Ukraine is also seeing “painful losses” in the Kharkiv region to the east of Kyiv, where Russia is trying to strengthen its position after being pushed back, Zelenskiy said. He added: “Battles are continuing there and we have to keep fighting, fighting hard.”

Six people were injured by falling debris in the Lviv region in western Ukraine on June 14 when a Russian rocket was shot down, said Maksym Kozytskiy, head of the regional military administration.

The regional military administrations in three other western Ukrainian regions — Ternopil, Ivano-Frankivsk, and Khmelnytskiy — reported that Russian missiles had been shot down by air defense forces. There was no damage and no injuries reported in those locations.

Deputy Defense Minister Anna Malyar said earlier that Ukraine has received just 10 percent of the weapons it has requested from the West to help fight the Russian invasion.

“No matter how hard Ukraine tries, no matter how professional our army is, without the help of Western partners we will not be able to win this war,” Malyar said said in a televised briefing.

Western countries have promised to send sophisticated weapons, including advanced rockets, but deploying them is taking time.

Malyar said there should be “a clear timeframe” for the deliveries “because every day there’s a delay, we’re talking about the lives of Ukrainian soldiers and civilians.”

NATO is already “stepping up” deliveries and officials would be meeting in Brussels on June 15 to coordinate further support, including heavy weaponry, Stoltenberg told a press conference in The Hague after meeting the leaders of seven European NATO allies on June 14 ahead of a summit at the end of June.

Earlier, Zelenskiy appealed for heavy weapons from the West, criticizing the “restrained behavior” of some European leaders.

“I am grateful for what is coming, but it must come faster,” he told Danish journalists in an online briefing.

Russia has “hundreds of times more equipment and weapons” than Ukraine which did not have enough “long-range weapons” nor “armored vehicles, and because of that we are losing people,” he said.

Zelenskiy earlier voiced an emotional appeal for more advanced weapons that would allow Ukraine to survive “one of the most brutal battles in and for Europe.”

“We have to do much more together to win this war,” Zelenskiy told German weekly Die Zeit in an interview published on June 14, a day before NATO defense ministers meet in Brussels to discuss how to offer more support to Kyiv.

Zelenskiy asked in particular for more modern artillery, such as longer-range multiple rocket launchers, telling the German publication that military supplies from Berlin — a sensitive topic between the two countries since the start of the war in February — were “still fewer than they could be.”

It marked the second time in as many days that Zelenskiy appealed for more weapons, after saying in his nightly address that the battle for the Donbas region “will surely go down in military history as one of the most brutal battles in Europe and for Europe.”

Russian forces are now in control of Syevyerodonetsk but fierce urban combat continues in the key eastern city, Ukrainian officials said on June 14.

The Russian military is storming the city and then regrouping, the General Staff of the Armed Forces of Ukraine said.

Russian troops have been slowly tightening their grip on Syevyerodonetsk in recent days, cutting off the final bridge into the city on June 13 as street-by-street fighting continues.

Russian forces gained control of the city center due to their superior artillery firepower that involved the use of multiple-rocket systems, Ukrainian Defense Ministry spokesman Oleksandr Motuzyanyk said, adding that Russian forces were “suffering significant losses in the infantry units.”

The head of the city’s administration, Oleksandr Stryuk, told Ukrainian television on June 14 that despite a third bridge being destroyed, “the city is not isolated.”

“There are communication channels even if they are quite complicated,” Stryuk said, adding that there is round-the-clock fighting and the ground situation “changes every hour.”

Stryuk said more than 500 civilians are sheltering in the city’s Azot chemical plant, which authorities say has been the target of massive bombardment by Russian forces.

Russia’s Defense Ministry said it would open a humanitarian corridor from 8 a.m. Moscow time on June 15 to allow civilians to leave and urged Ukrainian fighters holed up in the Azot chemical plant in the city to “stop their senseless resistance and lay down their arms” at the same time.

There also are “fierce battles” near Izyum in the Kharkiv region, and about 15,000 civilians remain in the city itself, Maksym Strelnyk, an Izyum City Council member, told RFE/RL.

“One of the fiercest battles in Ukraine is taking place in Izyum,” Strelnyk said. Russian forces have amassed about 25 battalion-tactical groups near the town and is trying to advance toward Slovyansk and the town of Barvinkove about 25 kilometers to the east.