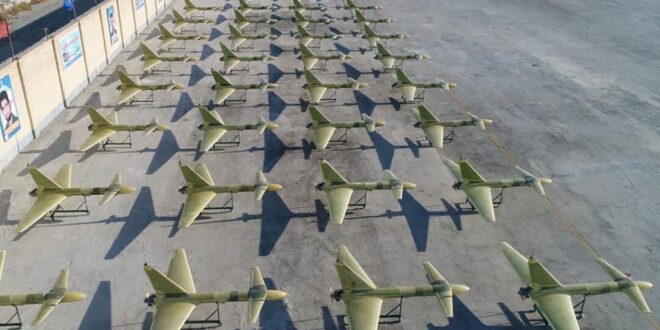 On May 16–17, with much of the attention in Eurasia still fixated on the Russian-Ukrainian war, the chief of staff of the Iranian Armed Forces, Major General Mohammad Bagheri, paid a visit to Tajikistan, where he met with President Emomali Rahmon and senior military officials. In the most important event of this trip, General Bagheri and his hosts inaugurated the opening of an Iranian Ababil-2 unmanned aerial vehicle (UAV) factory in the Tajikistani capital of Dushanbe (Tasnim News, May 17).

Literally, “Ababil” means a “Flock of Birds” and refers to the miraculous birds in Islamic belief, mentioned in the holy book of the Quran. The first in the Ababil series of drones (Ababil-1), built by the Iran Aircraft Manufacturing Industrial Company (HESA), was used during the later stages of the 1980–1988 Iran-Iraq War. The follow-on Ababil-2 is a low-cost tactical drone, designed for reconnaissance, surveillance and attack missions. It has a range of 200 kilometers and can stay in the air for 1.5 hours (Asia Times, May 20). The UAV can reach an altitude of 11,000 feet and, in surveillance and reconnaissance operations, can monitor an area of ​​770 square kilometers (IRNA, May 17). Moreover, it has the ability to take off from boats and speedboats.

Regarding last month’s visit of the highest Iranian military official to Tajikistan, the following points deserve closer consideration. First, although the history of drone manufacturing in Iran dates back to three decades ago, this is the first time Iran officially and openly launched an operational UAV production line in another country. The factory is the result of the implementation of bilateral agreements reached by the Joint Defensive and Military Committee during the visit of Tajikistani Defense Minister Colonel General Sherali Mirzo to Tehran on April 5, 2021. Iran’s chief of staff of the Armed Forces, General Bagheri, said then that “the Joint Committee will draft the future of military and defense cooperation between the two countries” (Tehran Times, April 9, 2021).

Second, the military cooperation between Iran and Tajikistan, including the opening of the Iranian Ababil-2 drone factory in Dushanbe, is one of the most important results so far to come out of the lifting of Iran’s arms embargo. Based on the United Nations Security Council Resolution 2231 (July 2015), which endorsed the Joint Comprehensive Plan of Action (JCPOA) on the Iranian nuclear program, all restrictions on the supplies of major arms to and all arms from Iran expired in October 2020. It means Iran will be legally able to buy and sell conventional weaponry, including small arms, missiles, helicopters and tanks (Al Jazeera, October 17, 2020). Therefore, in the long run, Iran could become a new competitor to Russia, China, Turkey and Israel in terms of military equipment exports to Central Asia.

Third, the development of military and defense cooperation between Iran and Tajikistan should be considered another sign of the de-escalation in their bilateral relations. The visit of the new president of Iran, Ebrahim Raisi, to Tajikistan in September 2021 (his first foreign trip as head of state) notably played an important role in overcoming the differences and tensions between the two countries after 2015. In turn, Tajikistan’s long-serving president, Rahmon, traveled to Tehran for the first time in nine years, just a few days following the General Bagheri’s visit to Dushanbe and the inauguration of the Ababil-2 plant. During Rahmon’s visit, the Supreme Leader of Iran, Ayatollah Ali Khamenei, in a meeting with the Tajikistani leader, said that “such cooperation is very important. Drones are an important factor in the security of countries today” (Tehran Times, May 30).

Fourth, this enhanced “hard” security cooperation can also be considered in line with Iran’s broader transition from observer to permanent member of the Shanghai Cooperation Organization (SCO) (The National Interest, November 28, 2021). Iran fully joined the SCO at the organization’s summit in Dushanbe, Tajikistan, on September 16–17, 2021. However, the legal process associated with Iran becoming the ninth SCO member will take two to three years. The recent military agreements with Tajikistan will strengthen Iran’s military and defense position in the SCO and pave the way for similar pacts with other Central Asian countries.

Fifth, Tajikistan shares a 1,200-kilometer border with Afghanistan and has faced threats from the Islamic State as well as the Taliban. Moreover, the second half of May saw the worst violence in the Pamir Mountain region of Tajikistan since the end of the civil war in 1997 (see EDM, June 1). Although the Russian 201st Military Base is in Dushanbe, and Russia has strengthened this outpost with new tanks and missile-defense systems since the Taliban returned to power in Afghanistan (Reuters, December 6, 2021), Moscow’s present focus is on its war against Ukraine. In such circumstances, Dushanbe hopes to strengthen its own security preparedness by, in part, acquiring improved military UAV capabilities with help from Tehran. In turn, Iran also shares a 945-kilometer border with Afghanistan and has faced similar security concerns since the Taliban retook Kabul. For this reason, Ayatollah Khamenei, in his aforementioned recent meeting with President Rahmon, said that “security concerns, especially about Afghanistan and the spread of terrorism, are important issues between the two countries.” (Tehran Times, May 30).

Sixth, Tajikistan experienced several violent border incidents and tensions with Kyrgyzstan over the past year (see EDM, June 21, 2021). In response, Kyrgyzstan was the first Central Asian country to purchase the Turkish-made Bayraktar TB2 combat UAV (Middle East Eye, November 5, 2021). It seems that the development of Kyrgyzstan’s defense and security cooperation with Turkey as members of the Organization of Turkic States, as well as the publicized success of Turkish drones in the Second Karabakh War and in Ukraine, played a significant role in the Tajikistani government’s decision to open an Iranian drone plant in Dushanbe.

Finally, Moscow’s silence on Iranian-Tajikistani military cooperation, and especially the Ababil-2 factory in Dushanbe, was particularly noteworthy. Some Russian media outlets reacted to this issue but avoided critical rhetoric (Gazeta.ru, May 19; Sputnik News, May 17). Russian officials, on the other hand, said nothing publicly. Moscow’s reticence may, therefore, indicate a level of Russian satisfaction with this Iranian-Tajikistani security collaboration, especially for countering the threat of terrorism and extremism from Afghanistan. Russia’s logic in this regard seems to be similar to its passive acceptance of military cooperation between China and Tajikistan (Carnegiemoscow.org, December 31, 2021). In fact, Russia prefers for its close regional allies to receive defense and security support from Iran and China if this will mean crowding out Turkey and Western countries.