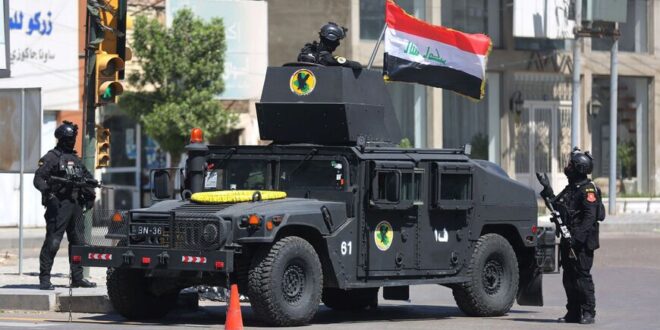 Multiple counterterrorism operations against Islamic State hideouts in both Iraq and Syria in recent weeks have taken out men whom officials claim were leaders within the international terrorist organization.

As the fifth anniversary of Iraqi forces’ retaking of Mosul from the Islamic State (IS) approaches, counterterrorism operations in the country in recent weeks continue to kill important targets.

These operations have largely focused on areas disputed between the central government and the Kurdistan Region.

IS hideouts and operatives in Iraq’s western desert stretching to the Syrian border have also been targeted, however, as well as in and close to the capital.

On June 15, Iraq’s Counterterrorism Services (CTS) announced they had killed three members of “IS gangs” in Kirkuk in an operation that started at dawn that day. A week before, the CTS had conducted an airdrop into the Anbar desert that resulted in the killing of a local leader there. Kirkuk is an oil-rich region that both Baghdad and Erbil lay claim to but under the central government since late 2017.

The CTS also reported on June 15 that they had raided a hideout in the Makhmour mountains northwest of Kirkuk, where they found explosives, grenades, night vision and thermal optics equipment. The Makhmour mountains, southeast of Mosul in the Nineveh province, are also between territory held by the central government and the Kurdistan Region of Iraq (KRG).

These areas have long been seen as breeding grounds for criminal and terrorist activities given gaps in security and poor coordination between the various forces deployed to them.

Iraqi airstrikes that targeted an Islamic State hideout in Wadi al-Tharthar in the western part of the Salahuddin governorate on June 14, meanwhile, reportedly killed eight “terrorists” including multiple key local figures, according to a statement posted on social media on June 16 by the government-linked Iraqi Security Media Cell.

It noted that DNA testing had identified four bodies. One was reported to have been the wali (governor) of IS’s Wilayat al-Dijlah and another the wali of its Wilayat Salahhuddin. A third one was named as a financial officer in the international terrorist organization.

The statement pointedly noted that the operation was conducted only after receiving and verifying “highly accurate information,” implicitly stressing the importance of intelligence gathering and trustworthy contacts within local communities.

While the US-led international coalition against IS ended its combat mission in Iraq late last year, advisors remain in the country, and intelligence sharing continues.

Coalition support proved key to eliminating IS’s territorial control of large parts of the country, with Iraq announcing defeat of the group within its borders in December 2017.

Across the border in Syria, where the conquest of the group’s last territory was announced in early 2019, the US-led coalition’s combat mission against IS continues.

This mission is, however, mostly limited to operations within territory held by the US-backed, Kurdish-led Syrian Democratic Forces (SDF) in the northeastern part of the country and a presence at the Tanf garrison further south. The coalition partners with a Syrian Arab armed opposition group known as Maghawir al-Thawra (MaT) in Tanf.

Kill or capture operations for high-value targets are also conducted in areas of northern Syria under Turkish-backed armed opposition groups. These operations are presumably, though not officially, carried out with Turkish backing and/or intelligence sharing.

Shortly after midnight on June 16, reports began to appear on social media of multiple coalition aircraft involved in an operation in the Aleppo province near the city of Jarabulus under these Turkish-backed opposition forces.

A coalition statement released later that day noted: “Coalition forces identified the senior ISIS [IS] leader detained during a June 16 counterterrorism operation in Aleppo, Syria, as Hani Ahmed al-Kurdi. Al-Kurdi was an experienced bomb maker and operational facilitator who became one of the top leaders in the Syrian branch of ISIS.”

It said he had been “responsible for coordinating terrorist activities across the region” and had been involved in “facilitating attacks on U.S. and partner forces.”

Some reports claimed that there had been three men at the home raided and that the other two — also senior IS leaders — had escaped. A request by Al-Monitor for additional details had not been answered by the time of publication.

During the same night as coalition operation in the north, the Tanf garrison came under attack.

A coalition spokesman told Al-Monitor, “No Coalition forces were harmed and there was no impact on any installation housing Coalition personnel in At-Tanf” but had not responded to a request for additional details.

An MaT media officer told Al-Monitor on June 6 that, “unknown aircraft” had targeted one of “MaT’s positions surrounding the al-Tanf base” but that only material damage resulted and no fighters had been injured.

In response to a question about intelligence sharing with Turkish-backed Syrian opposition groups, the MaT told Al-Monitor on June 17, “We have good relations with everyone in the Free Army, because Jaish Maghawir al-Thawra is a faction affiliated with the Free Army” and that IS “still represents a threat and is still moving within the areas controlled by the regime.”

The SDF and MaT do not collaborate in any way, as both coalition officials and the MaT commander have previously confirmed to Al-Monitor.

Concerns surged earlier this year about the potential fallout from a massive jailbreak in the city of Hasakah, currently mostly under the control of US-backed, Kurdish-led SDF, with small pockets of territory held by the Syrian central government. The jail had housed thousands of IS prisoners and many Iraqi nationals, including high-value targets. Hundreds escaped.