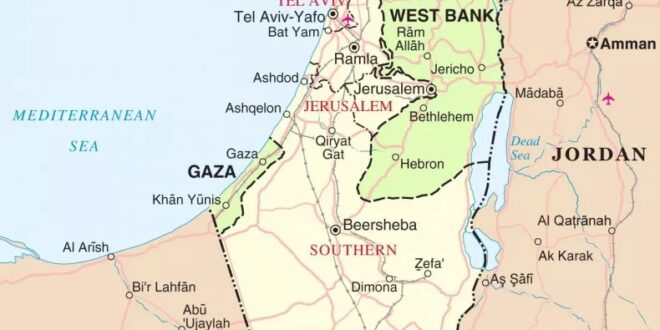 Israel Boosts Southern Border Defense Facing ISIS On One End, Iran On Other

The Israeli military has devised a new southern border strategy to contend with emerging and existing threats, including those posed by the Islamic State militant group (ISIS) to the west and forces aligned with Iran to the east, as well as smugglers seeking to bring drugs and weapons into the country.

In the first-ever revelation of the plan to the press, an Israeli security official discussed the strategy with Newsweek on the condition of anonymity.

“We’ve done a very significant amount of work in the last two years to sharpen our soldiers in the face of these threats,” the Israeli security official told Newsweek. “The main tactic that we use is ‘Defense by Colors,’ which we use to defend against these threats on the border and help our soldiers prepare for every scenario.”

The system ranges from green, the lowest threat level, to red, the highest, in an effort to assess where enemy action is most likely to take place and to appropriately allocate the necessary resources.

“The system also affects the level of threat that is likely to be carried out on the basis of the indicative signs we have and the severity of a potential threat,” the Israeli security official said.

Another factor influencing the level is the assessed proximity of the threat to Israeli civilians whom enemy groups have sought to target.

While Israel has traditionally focused on its other restive boundaries, in the north near Lebanon and Syria and in the east and west with the Palestinian territories of the Gaza Strip and West Bank, the far larger southern borders flanked by Egypt to the west and Jordan to the east also present a unique set of challenges.

Israel has long made peace with these two Arab states, and even cooperates with their security forces on a daily basis. But regular incidents involving both criminal and militant organizations continue to keep Israeli troops on their feet in the sprawling, remote desert region that bridges North Africa and West Asia.

“We are making great efforts to assess where the enemy’s action is likely to take place and allocate the necessary resources in accordance,” the official said. “This is a necessary component in defending a region that comprises over a third of the State of Israel.”

When it comes to the border with Egypt, the Israeli security official discussed the interdiction of dangerous items being smuggled into Israel.

“The threat on the western side is the smuggling of drugs that people tend to bring into Israel on a day-to-day basis,” the security official said, “and our job as the IDF isn’t to identify what might be drugs and what might be weapons, but rather to stop anything that may enter Israeli territory in order to defend our borders.”

These smugglers, mostly rooted in local Bedouin communities in the Sinai Peninsula, often carry weapons, and attempts to thwart their operations sometimes devolve into armed clashes.

Also operating in these lands, however, is ISIS’ Sinai affiliate. Despite the weakened state of the broader ISIS movement that once dominated large swaths of Iraq and Syria, those aligned with the jihadis in the Sinai Peninsula are believed to still number in the hundreds, hailing from across the Middle East, and more recently from the Gaza Strip itself.

While attacks conducted by ISIS’ self-proclaimed Sinai province have largely focused on Egyptian military and civilian targets, a January 2020 announcement by then-ISIS spokesperson Abu Hamza al-Qurashi announced a “new stage” in the group’s tactics, calling for followers in the Sinai Peninsula and Syria “to wage war against the Jews and regain what they stole from the Muslims.”

ISIS activity targeting Israel, which did not join the U.S.-led coalition against the jihadis, remains relatively minimal compared to nearby Arab states, or even Turkey and Iran elsewhere in the Middle East.

But supporters appear to have heeded the group’s call to strike Israel, as ISIS claimed a rare deadly double attack in the northwestern city of Hadera in March. The assault came amid a months-long sharp uptick in violence launched by Arab assailants. The confrontations included unrest at the Al-Aqsa Mosque in the leadup to the holy month of Ramadan. In April, Qurashi’s successor, Abu Omar al-Muhajir, called for further operations on Israel and other Middle Eastern and Western nations.

Disparaging rival Palestinian groups and Muslim leaders, Muhajir said the contested city of Jerusalem “will not be conquered except by the monotheists and the mujahideen servants of God” of which those behind the recent ISIS-claimed attacks in Israel were a “good example” for those seeking to carry out new acts of violence.

The following month, Israeli authorities arrested five men said to belong to ISIS in occupied East Jerusalem in a crackdown.

Across the border, there have been success stories, however. Egyptian military operations have managed to push ISIS further back from the Israeli border, allowing civilians to return to settlements.

But recent weeks have been marked by both sides claiming casualties, as the jihadis conducted a new wave of attacks, including at the Rafah crossing between Egypt and the Gaza Strip.

In the east, as in Egypt to the west, the Israeli security official said that “the main threat on the Jordanian end is the smuggling of hard drugs and weapons.”

Here too, however, enemy forces operate. Cells of militant groups, some with ties to Iran, have been allegedly identified trying to infiltrate the crossing between Jordan and Israel.

While Iran’s most powerful paramilitary ally is the fellow Shiite Muslim Hezbollah group operating from its native Lebanon, as well as in Syria, the Islamic Republic has forged ties with an array of regional groups, including Sunni Muslim Palestinian factions such as Hamas and the Islamic Jihad. Both groups have operated largely out of the Gaza Strip but have ties abroad, including in Jordan, whose population is primarily of Palestinian origin.

The skies remain a primary concern as well, given Iran’s advances in unmanned aerial systems with deadly capabilities.

During the explosive two-week war between the IDF and Gaza-based Palestinian factions led by Hamas and Islamic Jihad in May of last year, the IDF announced that it downed an armed unmanned aerial system (UAS) of initially unknown origin approaching the Israeli border from Jordan. Then-Israeli Prime Minister Benjamin Netanyahu said shortly after that the drone was built by Iran.

And two months later, Jordan’s King Abdullah II told CNN in July that his country has increasingly “been attacked by drones that have come out that are Iranian signature.” He suggested some of these attacks were intended for Israel, noting that “what misses Israel sometimes lands in Jordan.”

On Monday, Israeli Defense Minister Benny Gantz announced to lawmakers that the country was part of a regionwide coalition he called the “Middle East Air Defence Alliance.” This bloc, he said, “is already operative and has already enabled the successful interception of Iranian attempts to attack Israel and other countries.”

The tensions between Iran and Israel have only worsened since then-U.S. President Donald Trump unilaterally withdrew his country from a multilateral nuclear deal with Tehran and major world powers in May 2018. His successor, President Joe Biden, has yet to reenter the accord despite more than a year of negotiations with signatories in the Austrian capital of Vienna, and Israeli leadership has repeatedly warned his administration against returning to the agreement.

Iran, for its part, has denied any plans to seek nuclear weapons, and has pointed to Israel’s own alleged nuclear program, the existence of which Israeli officials neither confirm nor deny. Iranian officials have also kept a close eye on turmoil within Israel’s borders, both in terms of recent security incidents and political instability.

As reports emerged Tuesday that Israel’s parliament would be dissolved, sending the country into its fifth election in just three years, Iranian Revolutionary Guard commander Major General Hossein Salami pointed to news “that the Zionist regime has collapsed politically” as a sign that his country’s foes were growing weaker during a ceremony at the Imam Khomeini Mosque in Shahrekord.

At the same time, he said, his own country “is gaining more strength and in the near future Iran will be one of the world’s top powers.”

That same day, the Iranian Intelligence Ministry announced it has detained three alleged operatives of Israel’s Mossad spy agency, accusing them of planning the assassination of Iranian nuclear scientists who have been targeted in a more than-decade-long series of operations widely blamed on Israel.

The work done by the Israeli personnel in the southern border regions is unique in some ways, as they coordinate closely not only with other Israeli agencies but also with the armed forces of Egypt and Jordan. This collaboration entails the critical sharing of intelligence and operational activities to safeguard all sides and prevent any international incidents.

While Israel has managed to expand its diplomatic footprint in the Arab World by establishing diplomatic relations with the United Arab Emirates, Bahrain, Sudan and Morocco over the past two and a half years, historical enmity and a precarious security situation still loom over this strategically located stretch of the Middle East.

Egypt and Jordan, both of which fought in all three Arab-Israeli wars of the past century, continue to protest Israel’s treatment of Palestinians and the ongoing occupation of their territory. Any breakdown in Israel’s otherwise robust border security arrangements with these two states could have disastrous implications for a country already flanked by foes.

Against this backdrop, the Israeli security official explained that any incident had to be treated as a high priority.

“Any minor tactical event could potentially end up being a significant strategic event if it’s not handled properly,” the official said.

Post Views: 45
Previous Syria Insight: Why did Russia allow Israel to bomb Damascus Airport?
Next 7 Priorities for the G7: Managing the Global Fallout of Russia’s War on Ukraine