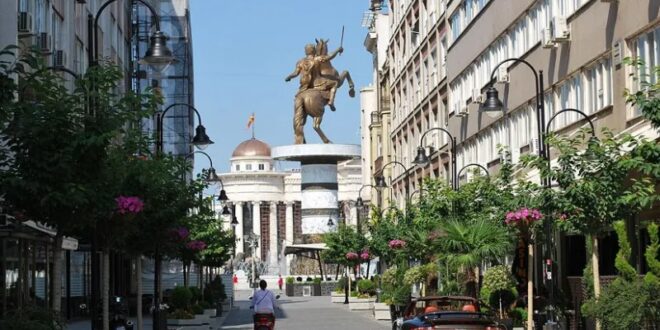 At a debate held in Skopje on Monday, experts said that if media leaks about the unpublished draft are correct, it could further weaken the country’s position and only complicate the EU enlargement process even more.

One of the main concerns at the debate organised by the Institute for Democracy-Societas Civilis and the European Policy Institute, two Skopje-based think tanks, was a reported provision in the proposal.

This supposedly says that before starting actual EU accession talks, North Macedonia would have to insert Bulgarians into the country’s constitutional preamble as one of the constitutive ethnicities that form the state.

“If we accept this proposal, it would put us in a very unpleasant, self-destructive situation as a country,” the head of Societas Civilis, Marko Trosanovski, told the debate.

He argued that while this would allow Brussels and the French EU presidency to boast about their success over the EU enlargement agenda, in reality, North Macedonia won’t be able to deliver and would remain stuck.

“We cannot deliver a qualified majority [a two-thirds majority in parliament] to insert the Bulgarians into the constitution and we won’t be able to do so in the foreseeable future,” he said.

“This would leave the country in a weightless state where on one hand we will have the EU negotiations launched but we will not be able to make any progress, so we will be stuck in internal, interethnic and intra-Macedonian antagonisms,” Trosanovski said.

He was referring to the government’s narrow majority in parliament and to the opposition’s stiff opposition to any such constitutional change.

North Macedonia does not recognise Bulgarians as a constitutive entity.

Moreover, experts said the proposal would only strengthen Bulgarian arguments, some of which deny the existence of the Macedonian identity and language as separate from the Bulgarian – bringing them into the country’s so-called “negotiating framework” with Brussels.

In practice, this would mean that the Bulgarian demands would become Brussels’ demands. North Macedonia has always insisted it is not in Brussels’ jurisdiction to meddle in identity issues.

According to the former North Macedonian Foreign Minister and EU Affairs Minister, Nikola Dimitrov, this would set a dangerous precedent where a bilateral issue would become part of Brussels’ own agenda.

“The French proposal will not lead us towards EU membership,” Dimitrov said. “It leads us towards a narrow alley which is very complicated, burdened with Bulgaria’s demands, and it installs precedents for other countries that will come after us,” Dimitrov said.

At the debate, the two think tanks presented a document containing their joint opinion on the Bulgarian blockade and on the red lines that North Macedonia cannot cross.

In the opinion, named “Bulgarian veto of Macedonia’s European integration: What kind of Apple can Macedonia Bite into?” some of the main points are that the country cannot accept the introduction of mechanisms to monitor the 2017 friendship agreement with Bulgaria into the EU negotiations through the negotiating framework, and that changing the constitution must not be accepted as a precondition for the start of EU accession talks.

Furthermore, it states that there must be firm guarantees over the Macedonian language in the EU negotiations document and that in case of a breakthrough in the bilateral dispute, Bulgaria must promise not to raise even more issues further down the line during the negotiations.

The French proposal, which was not shown to the public, was sent to both countries at the end of last week. Some 11 days before the end of the French EU presidency, it is seen as a last-ditch effort at a breakthrough, with very slim chances of success.

One of the main obstacles is the current political turbulence in Bulgaria, where the government’s majority crumbled last week, partially over the dispute with North Macedonia, and over an expected no-confidence vote in PM Kiril Petkov’s government this week.

Post Views: 73
Previous How Crypto And CBDCs Can Use Less Energy Than Existing Payment Systems
Next Russia’s President Putin On New Global Configuration