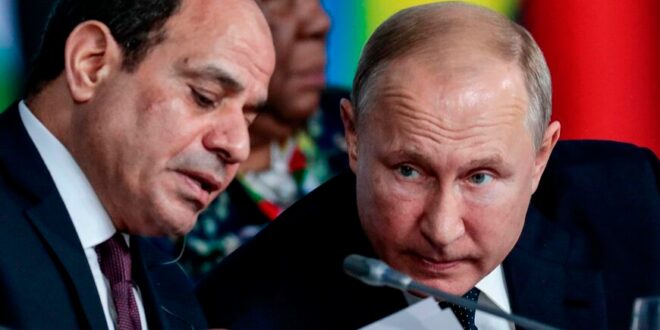 Egypt participated as a guest of honor in the 25th St. Petersburg International Economic Forum on June 15-18. The forum is considered to be the most important annual economic conference in Russia.

Egyptian President Abdel Fattah al-Sisi participated via video conference in one of the sessions of the forum on June 17 alongside Russian President Vladimir Putin.

In his speech, Sisi said, “Egypt will be a guest in this year’s forum session on the 25th anniversary of its launch, which reiterates the distinguished level that Egyptian-Russian economic relations have reached over recent years.”

He added, “This year’s forum is being held amid unprecedented political and economic circumstances and strategic challenges. We hope that the outcomes of the forum will contribute to finding effective solutions to these challenges in a way that mitigates the impact of the global economic crisis and its negative repercussions on many countries in the world, especially the economies of emerging countries.”

Sisi did not explicitly address the Ukrainian war in his speech and only referred to it by saying that there is a “major economic crisis.”

He stated that “the Arab Republic of Egypt values its firm, historic friendship relations with the Russian Federation, and values the tangible progress the two countries’ relations have been witnessing over the past years in a multitude of vital sectors, for the two countries’ economies and the prosperity of the two peoples.”

“The Arab Republic of Egypt and the Russian Federation have been engaged over the past years in the implementation of mega and ambitious projects that serve our countries and respond to the aspirations of our peoples to realize more economic progress. The most prominent of these are: the project for the establishment of the Dabaa nuclear power plant. … Another project is the establishment of the Russian Industrial Zone in the economic zone of the Suez Canal,” Sisi said.

Sisi also called on all companies participating in this forum to take advantage of this huge opportunity that is provided by investing in Egypt in all fields.

Rakha Hassan, a former Foreign Ministry assistant minister and member of the Egyptian Council for Foreign Affairs, told Al-Monitor, “Egypt topped the list of invitees to the St. Petersburg forum in Russia as a guest of honor this year due to the economic, political and military relations binding the two countries as well as the presence of major Russian investments in Egypt, namely the mega Dabaa nuclear project. Add to this the military cooperation and trade exchange between the two countries as well as the import of about 50% of Egypt’s wheat needs from Russia.”

Asked about the implications of Egypt’s participation in this forum amid the continuing conflict between Russia and Ukraine, Hassan explained that “Egypt’s participation as a guest of honor in the forum reflects the depth of relations between Cairo and Moscow, as Egypt is a pivotal country in the Middle East and the African continent and has promising potential for investment and major projects.”

He said that “through this forum, Russia is showing that it is not affected by the US and European sanctions and that it will not stop exercising its role as a country that has diverse activities with its friends and trade relations with different countries.”

Hassan added that “Egypt will preserve its impartiality in the current crisis (the Russian-Ukrainian war), and it knows full well that it has no interest in the current war, while the economic sanctions (from the United States and the West on Russia) have severely harmed it and the Arab countries as well.”

“Egypt, however, announced its official position (on the war) when it said that an attack on the sovereignty of a state is indeed contrary to international law, yet imposing economic sanctions on a state (referring to Russia) outside the framework of international institutions is also illegal,” Hassan added.

In a June 17 report, The New York Times pointed to the “balance” that Egypt is seeking to strike with Russia and the United States in the midst of the Ukrainian war and said that “Sisi has tried to balance both relationships, refusing to condemn Russia’s actions as strongly as the US has asked … Egyptian public opinion also skews toward Russia. Many Egyptians are happy to see Russia challenging the United States and its allies.”

Tarek Fahmy, a professor of political science at Cairo University, told Al-Monitor, “Sisi’s participation in the opening session of the Russian forum reflects Egypt’s interest in the Russian side and its keenness to boost cooperation with Russia.”

He added, “However, Sisi noticeably spoke on the same day (June 17) at the summit of the Major Economies Forum on Energy and Climate, which is held under the auspices of US President Joe Biden. This shows Egypt’s keenness to strike a balance in relations with major powers” such as Russia and the United States.

Fahmy explained that “Sisi’s speech at the St. Petersburg forum conveyed important messages, foremost of which is that the partnership with Russia is extended and continuous, and work is underway to develop it by implementing major projects. The speech also showed that Egypt is currently governed by its strategic interests.”

Ali al-Idrissi, a professor of economics at the Culture and Science City in Cairo and member of the Egyptian Society for Political Economy Statistics and Legislation, described the economic and trade relations between Cairo and Moscow as “historic.”

He told Al-Monitor that “Russia seeks to increase the volume of trade exchange with Egypt, a country it views as a gateway to Africa, and said that such exchange serves as a win-win situation for both countries, allowing them to achieve common interests.”

During her speech at the Egyptian-Russian Business Forum on the sidelines of the St. Petersburg International Economic Forum on June 16, Gamea said that “trade relations between Egypt and Russia witnessed tangible progress over the past period, as the total trade exchange between the two countries stood during 2021 at about $4.7 billion compared to $4.5 billion in 2020, an increase of 5.1%.”

He added, “The Russian economic forum is a common interest for both Cairo and Moscow, as it offers a chance for Russia to expand trade movement with Egypt and other participating countries.”

Post Views: 117
Previous Islamic Jihad ramps up the threats toward Israel in West Bank
Next The Ukrainian War and a New World Order