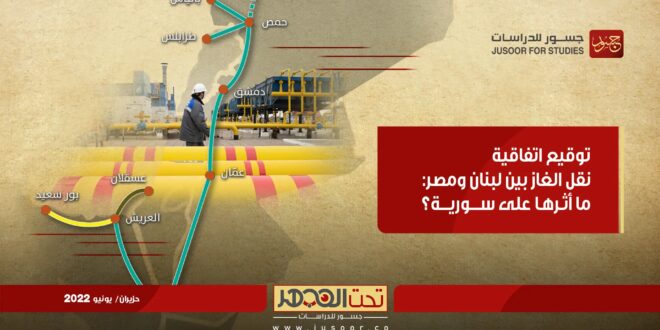 A report by the Jusoor Center for Studies sheds light on the agreement that Lebanon announced with Syria and Egypt, according to Shaam Network.

A report by the Jusoor Center for Studies sheds light on the agreement that Lebanon announced with Syria and Egypt to transport Egyptian gas through Jordan and Syria to Lebanon. It provides for the transfer of 650 million cubic meters of gas annually to the Deir Ammar power plant in Lebanon.

The center pointed out that this came after energy-related moves in the region. It was represented by the visit of the American mediator on issues of demarcation of the maritime borders between Lebanon and Israel, and the visit of the European Commission official to both Israel and Egypt to discuss the supply of gas to EU countries.

Jordan had hosted a meeting in September 2021 for each of the energy ministers of the four countries (Egypt, Jordan, Syria, and Lebanon). The purpose of the meeting was to present a work plan and a timetable for the delivery of gas to Lebanon, which was determined between 4 and 6 months; It passed without actually achieving anything.

U.S. had previously given its approval for the project on August 19, 2021, to renew its approval after the signing of the last agreement in June 2022, which comes as a re-production of the Arab Gas Pipeline project. Its implementation actually began at the beginning of the third millennium and most of its parts were completed. This means that the countries have the necessary infrastructure for implementation, with the need to maintain this infrastructure as a result of obsolescence.

According to the study, the project faces technical, economic, and security obstacles. Syria will be allowed to obtain part of the electricity quantities due to the passage of gas through its territory, and the project may contribute to increasing these quantities reaching the country in the future.

The implementation of the project requires Egypt, Jordan, and Lebanon to obtain an exception from the United States to deal with the Syrian regime in energy issues related to the project. This may actually take place, with the State Department confirming that more assurances will be given to those countries, which may be in the form of a memorandum or official announcement from the Treasury Department’s Office of Foreign Assets Control.

The regime is expected to actually benefit from an estimated 8% share –a small amount that could slightly improve the state of Syria’s electricity grid, which may not exceed half an hour of additional daily feeding. However, the regime’s greatest benefit comes in the context of cooperation with its surroundings and breaking its isolation from the penal code imposed on it. It may find an important outlet for its return to the consideration of other projects compatible with the regional framework and the interests of the major powers in the region, according to Jusoor for studies.