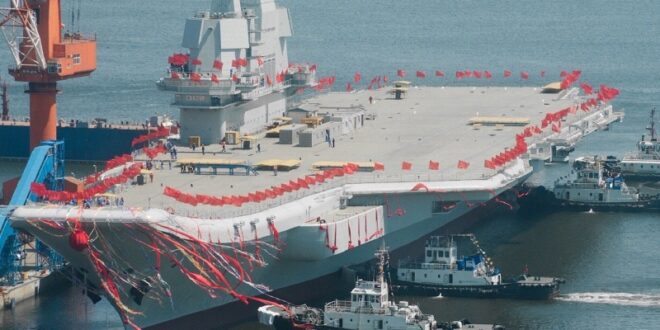 With China officially launching its aircraft carrier Fujian, questions have arisen concerning such a development. Here, we have answered some questions on different levels according to the timeline, so as to present a clearer picture of the situation, showing the close relations between China’s economy and the country’s national defense.

As things stand, the vessel, referred to as a Type 003 carrier, owes its existence to China’s Belt and Road Initiative (BRI) and the “golden decade” in its economic development.

The emergence of the BRI requires China to defend its maritime routes. In the hypothetical scenario where the BRI does not exist, China’s geopolitical interest would not have expanded to the extent that a blue-water navy is necessary. Ukraine for instance has no navy at all, yet it still can control the Black Sea with shore-based “Harpoon” missiles. Therefore, without global interests, there would be no aircraft carrier today.

It should be remembered that not only the construction, but also the maintenance of aircraft carriers would require financial resources, and such resources were obtained through China’s economic development. In Russia’s case, after the disintegration of the Soviet Union and the collapse of Russia’s economy, its aircraft carrier fleet had to be disbanded, and this is a good example of the relations between the national defense with the economy. It is precisely because of the “Golden Decade” of China’s economy that laid the foundation for the country to establish its blue-water navy today.

The next question is, why did China launch the BRI? How did such an initiative come into being?

With China emerging as the major manufacturer for the rest of the world, conflicts follow suit. Furthermore, overcapacity eventually kept the price down, then came the overstocked inventory and debts. In resolving such issues, I had thought of the principle of the Marshall Plan, and this formed the predecessor and foundation of the BRI. Any detailed discussion on this topic would be long and arduous, yet in essence, the focus is on transferring production capacity, increasing investment in the world, transferring capital, and so on. These are all, in fact, related to resolving China’s own problems, that is to maintain its stable development.

This suggestion has attracted the attention of the Chinese leadership, and related policies were eventually introduced. After such a formation process, the policy was finally implemented as the BRI. It is now harder for the public to find books and narratives about the formation process of the BRI. The reason is that most did not go through such a process at all, and many only participated in it later. This, of course, does not mean that the policy formation process did not exist. After all, there is cause and effect for everything. As for the subsequent implementation results of the grand plan of the BRI, how a large number of projects went out of control is a different story, with its own causes and consequences.

The final question is, why did the “golden decade” come into play in China?

The BRI has created numerous demands, as was originally intended. In those years, not only did Chinese enterprises become larger and more prominent, but the annual growth rate of the government’s fiscal year also far exceeded the growth rate of GDP. It was such an accumulation of financial resources that supported the construction and development of aircraft carriers and other grand projects.

It is common knowledge that China’s economy entered a high growth stage after the year 2000. The annual economic growth rate was more than 10%, i.e., at a double-digit growth stage. Even when faced with the Wall Street financial crisis in 2008, China reacted by issuing an RMB 4 trillion economic stimulus package and the crisis did not impact the country much. The downturn in China’s economy was something that happened after 2012, and there are hard data that can prove this.

The so-called “golden decade” refers to an approximate time period where the main growth drivers are as follows: 1. The presence of a large amount of foreign investment and the continuous investment of foreign companies in China, making the country the world’s factory during that time. 2. China’s large number of net exports supported its economic growth. 3. Urbanization drove the development of the real estate sector, which in turn pushed the Chinese consumption and supported the economic growth. 4. China’s currency issuance, as well as investment, had driven its economic development. As it is well-known, the country’s economic growth is investment-driven. These factors worked together to form China’s “golden decade” and promote the rise of its economy into a salient global force.

The financial resources generated enabled the country to undertake various projects, including constructing aircraft carriers. Some of these projects were unimaginable in the past, yet China managed to accomplish them, such as high-speed rail networks, manned spaceflight, and so on. However, all these needed both demand and money. Of course, demand and money do not exist out of thin air, and there are driving factors behind them.

As an independent think tank, ANBOUND has the honor of participating in these great processes to a certain extent at a fundamental level through the construction of public policies, as well as in policy formation. Here, we briefly introduce some of the logical relationships and basic principles.

Looking into the future, China will face continuous challenges. From the point of view of naval projects such as aircraft carriers, as an important military asset in the future, their very existence will require more financial resources. To sustain them, China will either need to continue gaining money or it will need to tighten its belt. These are the only two options left for China.