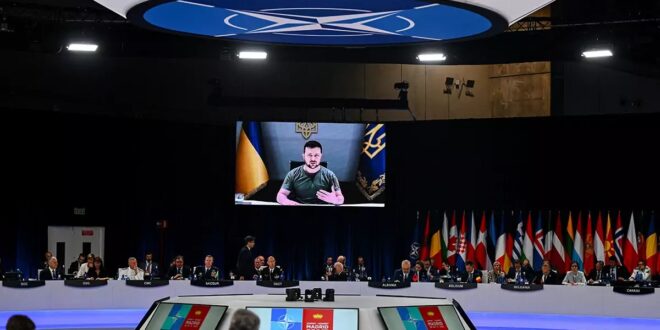 The Madrid summit paved the way for Finland and Sweden to join and underscored that Russia is NATO’s chief security threat. But the alliance’s new defensive efforts aren’t likely to change Putin’s strategy in Ukraine.

Moves by the North Atlantic Treaty Organization (NATO) this week reportedly put the alliance on its most dangerous footing with Russia since the Cold War. Is that true?
Yes, NATO’s new Strategic Concept adopted at this week’s summit defines Russia as “the most significant and direct threat to Allies’ security and to peace and stability in the Euro-Atlantic area.” Tensions have not been this high along the NATO-Russia frontier since before the end of the Cold War. NATO and Russian planes are conducting aggressive reconnaissance flights in the narrow airspace over the Baltic Sea, and both sides will likely step up those flights now that Sweden and Finland are on track to join NATO. The current dispute over Russian access to its exclave on the Baltic Sea, Kaliningrad, through Lithuania highlights the potential for conflict to spread beyond Ukraine into a direct confrontation between NATO and Russia. Belarus is also becoming more of a concern to NATO as Russia increasingly uses it to stage attacks on Ukraine.

As the West focuses on the challenge of exporting grain from Ukraine to deal with a looming global food crisis, there have been calls for NATO to break the Russian blockade on the Ukrainian port of Odesa on the Black Sea. As always, lurking in the background is the risk of Russia using tactical nuclear weapons. Russian saber-rattling has diminished in recent weeks, but it will likely reemerge with greater urgency should the situation on the battlefield turn against Moscow. The paucity of active communication channels between Russia and NATO members only heightens the risks.

NATO has vowed to defend every inch of its members’ territory against Russia, and it is taking major steps to deter possible attacks. It will continue to augment its forces along the NATO-Russia border in Eastern Europe. (At the summit, several allies announced plans to send additional forces to the region.) Likewise, NATO plans to build up its Response Force from forty thousand to three hundred thousand troops. Set up twenty years ago, the force was a high-readiness contingent capable of deploying quickly to deal with various contingencies, most often for disaster relief. After Russia’s invasion of Ukraine, its focus has shifted to defense of vulnerable allies along the frontier with Russia.

Russia’s strategic position has deteriorated substantially as a consequence of President Vladimir Putin’s decision to invade Ukraine. NATO is more unified in opposition to Russia than it has been for years, NATO has more forces along its borders than ever since the end of the Cold War, and Finland and Sweden are set to join the alliance. Talking to the press along with U.S. President Joe Biden, NATO Secretary-General Jens Stoltenberg noted the irony: Putin wanted less NATO on his borders, but because of his actions, he’s getting more.

Nevertheless, Russia’s reaction has been surprisingly mild. Senior officials have declared that Russia will take compensatory steps to guarantee its security, which could include additional troops and perhaps nuclear forces in its border regions. However, in May, Putin said that Russia has no problems with Finland and Sweden and that their joining NATO does not pose a direct threat, as long as NATO does not build up military contingents and infrastructure in those countries. What lies behind this stance is unclear, but, given the tough battle in Ukraine, Putin might not want to take on additional problems.

Could changes to force posture and strategic concept have any impact on the assault on Ukraine or Russia’s longer-term calculations?

NATO’s new force posture and strategic concept are not likely to prompt Putin to rethink his Ukraine strategy. He is making slow but steady progress on the battlefield in the east and south. Nothing suggests that he believes that the West’s provision of more sophisticated weaponry is going to shift fortunes on the ground. But the new circumstances in Europe do pose a long-term strategic challenge to Russia. Increasingly isolated in Europe, Putin was surely pleased to attend the recent summits of the BRICS grouping (Brazil, Russia, India, China, and South Africa) and of the Caspian states to underscore that Russia has friends and allies elsewhere. Whether they can compensate for the loss of European ties is another matter.

Did the summit reveal a newfound sense of NATO unity?

The summit was an impressive show of resolve to counter Russia’s aggression, including through continued diplomatic, economic, and military support for Ukraine. NATO pledged to further expand its military support for its vulnerable allies along the Russian frontier. In particular, the United States announced that it will establish a permanent headquarters for its V Corps in Poland. Most important was the eleventh-hour agreement that Turkey reached with Finland and Sweden, by which Ankara lifted its objections to their joining the alliance and allowed NATO to begin the accession process.

However, challenges remain. Burden-sharing is a perennial issue: Even after Russia’s assault on Ukraine, the majority of members fall short of their commitment to spend at least 2 percent of their gross domestic product (GDP) on defense. The laggards include, most importantly, Germany, although it has taken steps recently to meet that target as a multiyear average. Moreover, in the weeks ahead, the alliance’s resolve will be tested, as strains over rising inflation and concerns over energy and food supply mount across the Euro-Atlantic region. In recent weeks, France, Germany, and Italy have expressed interest in finding a negotiated settlement to the conflict, which would likely leave some seized Ukrainian territory in Russian hands. That position is vehemently opposed by Poland and the Baltic states, among others. Though those differences were pushed into the background during this summit, they have not gone away.

Post Views: 76
Previous Hamas heads multi-faction effort to challenge Palestinian Authority
Next Ukraine and the Return of the Multipolar World