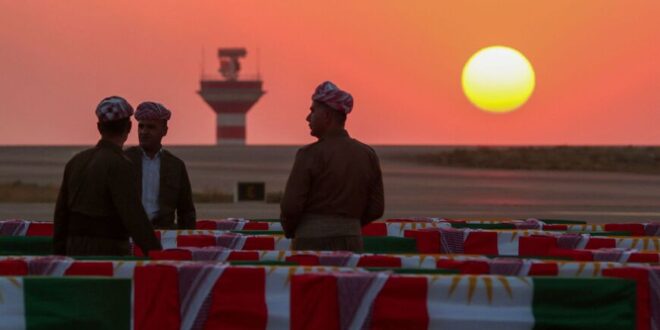 Vehicles allegedly carrying Kurdistan Workers Party (PKK) commanders continue to be targeted in the Kurdistan Region of Iraq amid claims Iran controls both the PKK and Shiite-led forces in oil-rich and disputed Kirkuk.

Attacks continue on vehicles carrying alleged Kurdistan Workers Party (PKK) fighters in the Kurdistan Region of Iraq as some claim the group is taking orders from Iran now.

The latest vehicle targeted was a Toyota Land Cruiser in the Ranya district of the Sulaimaniyah governorate on Aug. 1. One person was reportedly injured and the other fled, according to local media outlet Kurdistan 24. A local official told Kurdistan 24 that two PKK members, “including a suspected top official, were believed to have been in the vehicle.”

Sulaimaniyah is the eastern part of the KRI along the border with Iran. The Patriotic Union of Kurdistan (PUK) is strong in this region and known for having more sympathizers with the PKK than other areas of the region in which the rival Kurdistan Democratic Party (KDP) is stronger.

In recent years, the KDP and many others in the KRI have demanded more openly for the PKK — which is designated a terrorist organization by Turkey, the United States and the European Union — to leave the region.

A Peshmerga officer who said that his family had been displaced from Kirkuk to Chamchamal in Sulaimaniyah governorate when he was a child claimed in an Aug. 2 interview with Al-Monitor in Erbil, “Iran now controls the PKK.” Gen. Hama Regr is from the Peshmerga’s KDP-linked Unit 80.

Following a 2017 referendum, Kirkuk was forcibly retaken by central government forces from the Peshmerga the following month. A poster commemorating and lamenting the violent takeover of the city and other nearby territories hangs in the corridor of the Peshmerga offices where the interview was conducted.

The Peshmerga took control of the oil-rich city and other territory after the 2014 fall of Mosul to the Islamic State, but they lost men trying to hold onto it and eventually withdrew.

Iraqi Kurds see oil-rich Kirkuk, from which many were forcibly removed under Saddam Hussein as part of his efforts to Arabize the city, as an indispensable part of their region.

Regr noted that when the Peshmerga were forced out of Kirkuk in 2017, two of his family’s homes were confiscated by Shiite militias.

Taking out his cellphone, he showed photos of Asaib Ahl al-Haq’s leader Qais al-Khazali placed prominently outside one of the homes.

He said that he and his family had to flee their home with only the clothes on their backs. The thing he most regrets leaving behind were photos of him and his comrades when he was with the Peshmerga in Iran decades before, during Saddam Hussein’s time in power.

In relation to his statements about Iran controlling the PKK, he added, “A decade ago, when the Arab Spring happened, Iran sent the PKK to northeast Syria,” while the “Syrian government helped them to station in that area to stop any Turkish invasion.” Now, he said, the PKK “are totally dependent on Iran.”

Peshmerga mostly see Iran-linked armed groups — including ones incorporated into the government-salaried Popular Mobilization Units (PMU) — in the disputed territories as hostile.

Iran has repeatedly attacked Erbil and other areas of the KRI, while murky armed groups widely seen as facades for more well-known Iran-linked militias often carry out attacks on both the KRI and bases hosting Turkish troops in the area.

Regr added that Iran is acting through its proxies, including in the form of Shiite armed groups. He also said that IS had recently been trying to recruit more Kurds, focusing on those in western Iran and the eastern KRI.

IS was officially declared defeated in Iraq in December 2017 but cells remain active. In recent years, attacks by the international terrorist organization have been mostly concentrated in territories disputed between the central government and the KRG.

Kurdistan Region President Nechirvan Barzani had spoken out the previous week after several people were killed in four different governorates the same night, warning that the alarming trend is indicative of a “serious threat.”

Regr said that the KRG fully cooperates with the central government in sharing intelligence on IS fighters and cells despite major grievances with Baghdad and Iran-linked groups in those territories.

The Peshmerga officer claimed that there is a new IS formation active in Iraq known as the “Salahhuddin” unit, which “belongs to Iran” and for which Kurds are being recruited. Mostly “Kurds from the area around Kermanshah” and eastern areas of KRI have joined, he said.

Kermanshah is the largest Kurdish-speaking city in Iran and is located in the western part of the country not far from the border with Iraq. “IS wants to show that they are not only Arabs, and thus Kurds are useful for them” as well, the Peshmerga general claimed.

Regr estimated the number in this new formation to be around “250, but they split into small groups to operate more easily” and said many Kurds are from the “longstanding stronghold of Muslim extremists, Halabja” in the eastern part of the KRI. He said that the unit was operating in the Kirkuk and Diyala governorates and around Tuz Khurmato in Salahuddin governorate.

An officer for the central government operating in that area contacted by Al-Monitor said that a small IS group there was believed to be led by a man known as Abu Adnan al-Kurdi, a Kurd from the Kifri area of the Diyala governorate.

This officer, who spoke on condition of anonymity, added that there continued to be problems concerning Kirkuk and the question of who should be involved in governing it but claimed, “Regional powers will end up deciding the matter,” citing both Iran and Turkey as having major influence on decisions in the area.