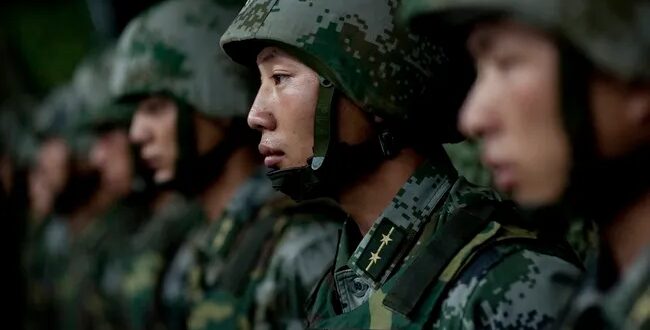 What we thought was posturing has now escalated to live firing exercises. Yesterday, SOFREP reported that House Speaker Nancy Pelosi had moved forward with her plan to visit Taiwan amidst warnings from China that they would be resolute in their response.

In a separate report here at SOFREP, we also noted how the US Navy had stationed the USS Ronald Raegan around the South China Sea, with supporting battleships as the USS Tripoli moved near the Southern part of Taiwan.

Though tensions are high, Pelosi released a statement saying the US administration is committed to supporting Taiwan’s democracy. She concluded her visit yesterday, saying, “America’s determination to preserve democracy, here in Taiwan and around the world, remains ironclad.” However, the US administration still acknowledges the one-China policy but allows for informal relations with Taipei.

However, within hours of Pelosi arriving in Taiwan, the Taiwan Defense Ministry claimed they were allegedly targeted by Chinese cyberattacks, crashing three official government websites.

“PRC [People’s Republic of China] announcing air-naval live-fire drills around Taiwan is self-evidently apparent that they seek a cross-strait resolution by force instead of peaceful means,” Taiwan’s Ministry of National Defense wrote on Twitter. “Activities around our territory are closely monitored by ROCMND [Republic of China, Ministry of National Defense] and will meet our appropriate response when needed.”

At around 5 p.m. on Tuesday, Taiwan’s presidential office’s website was attacked. This was just hours after Pelosi landed in Taiwan. It was only out for 20 minutes, but this was allegedly a stark warning from the Chinese government. As of writing, Taiwan officials have reached out to cybersecurity teams to tighten their defenses.

Then, a day after Pelosi’s visit, China launched an unannounced live-fire military drill around Taiwan, as Beijing continues to claim the island as part of its sovereignty.

China’s state media said the drills started at 0400 GMT Thursday and would not end until 0400 GMT Sunday. During the exercises, both Chinese battleships and aircraft crossed the Taiwan Strait median line, according to a source.

As a response, Taiwan deployed jets and missile systems to track the aircraft and naval ships crossing the line.”

“They flew in and then flew out, again and again. They continue to harass us,” the Taiwanese source told Reuters.

“The goal of these exercises, to put it bluntly, is to prepare for the military fight with Taiwan.”

Zhongping also said the location of the drills was also strategic. They were bisecting the north, east and southern parts of Taiwan at a really close range. Reports have noted that the drills were just about 12 nautical miles from Taiwan’s territorial waters.

“We can see China’s ambition: to make the Taiwan Strait non-international waters, as well as making the entire area west of the first island chain in the western pacific its sphere of influence,” said a senior Taiwanese official familiar with its security planning.

In anticipation of a direct confrontation, a professor at the National Defence University, Meng Xiangqing, told Chinese media that the drills were just a preliminary showcase of how China will handle the attacks if they were pushed to the point of having no other options.

“In fact, this has created very good conditions for us when, in the future, we reshape our strategic landscape conducing to our unification,” Meng noted.

Some Chinese ships are still on the northern coast of Taiwan, sealing off Keelung, a critical point where ally nations could potentially attack. Meng also said China could also close the “doors” to Kaoshiung, further isolating Taiwan from its peers.

A couple of hours ago, a Taiwanese official announced that 10 Chinese warships had briefly crossed their territorial waters. The Maritime and Port Bureau had already issued warnings to these ships. Furthermore, the Taiwanese Cabinet confirmed that these drills would disrupt 18 international routes through its flight information region (FIR).

However, because of the unprecedented timing, Taiwan’s ruling Democratic Progressive Party is saying this is an “irresponsible, illegitimate behavior.”

According to CNBC, the cabinet spokesman in Taiwan condemned the drills. However, China continues to refute it publicly.

However, Chinese Foreign Minister Wang Yi continues to appeal to other ASEAN countries during this meeting in Phnom Penh, Cambodia, with top diplomats.

“We have safeguarded the oasis of peace in the face of the turbulence in the international security situation,” he said.

However, he’s emphasizing that China’s sovereignty over Taiwan is absolute.

“The irreversible historical trend of Taiwan’s return to the motherland cannot be changed. Those who offend China will surely be punished,” he said.