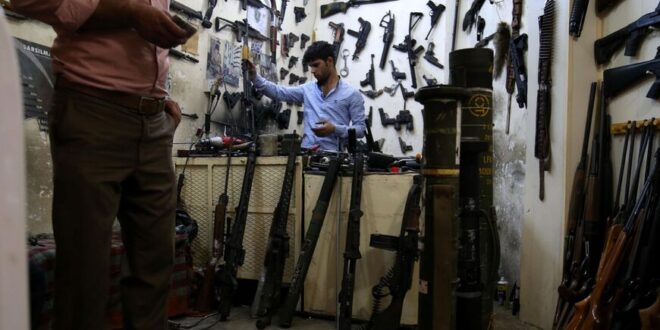 The autonomous government in northern Iraq has an ambitious plan to curb gun violence, but some in the region have concerns about the feasibility of gun control due to societal and political factors.

Gun violence in the United States continues to make headlines around the world, but Iraq’s Kurdistan Region is having its own struggle with the issue. In June, a law student at Erbil’s Soran University fatally shot a dean after being expelled for poor grades.

This was not the first shooting in the region this year. The Kurdish news outlet Rudaw reported that in April, military police shot and killed a civilian. Days after the law school shooting, a man entered a couple’s house in Erbil and killed both of them. On July 21, a gunfight broke out during a kidnapping attempt in front of a police station in Erbil, the Kurdish news outlet NRT reported.

One Kurdistan Regional Government official (KRG) said that the government loses legitimacy when it does not have a monopoly on violence. Hemin Merani, from the KRG Interior Ministry, told Al-Monitor, “When guns and hard power are widespread and is not only under the control of the government, it puts a big question mark on the state and the legitimacy of the government.”

The KRG is rolling out a comprehensive plan to manage private gun ownership in response to the deadly shootings, and is reporting some success so far. But some observers believe implementing gun control will be difficult due to high rates of gun ownership in Kurdish society, as well as political divisions and a lack of trust in state institutions.

Merani, who heads the diwan directorate in the KRG Interior Ministry, said the ministry has issued two regulations recently that specifically address violence: a procedure for allowing a limited number of people to legally keep guns, and a regulation of different types of guns, including heavy weapons and unlicensed firearms. The regulations pertain to the region’s gun laws.

Merani confirmed that gun shops have been closed until new procedures are put in place. Authorities have also started confiscating unlicensed weapons via checkpoints he said.

The new guidance allows some people to keep rifles and handguns, providing they can prove a need for personal protection. Merani said they plan to open 40 offices throughout the region this month to deal with firearm registration. People who want to keep guns will need permission from the KRG’s internal security services, aka Asayesh; a certificate from the Health Ministry for physical and mental health; and no criminal record. There will also be an option to sell the guns once dealers reopen, or turn the guns over to the KRG itself.

“It’s not ‘I like to have a gun.’ You should prove that you need a gun,” said Merani.

The KRG will issue one-year permits for private gun ownership, after which individuals will need to renew. Kurdistan Region residents also have one year to bring their guns to the authorities for these processes, according to Merani.

Until the gun registration mechanisms are put in place, the KRG is requiring people to keep their guns at secured at home.

Merani said these measures are working so far. “The mobile checkpoints for checking cars … they have captured very limited guns,” he said. “People have started dealing with the regulation of not holding guns in their cars and not taking them to coffee shops and restaurants.”

Gun ownership is commonplace in the Kurdistan Region, not only among Kurds, but in Arab, Christian and other communities as well. Last year, one KRG official estimated that 70% of the region’s population had weapons. In recent years, many gun stores have operated throughout the region, sometimes selling firearms for as little as $200.

Ruwayda Mustafa is a British-Kurdish political activist and rights advocate, as well as the founder of Women.Krd, which documents violence against women. She traces the high rates of private gun ownership in Kurdish society to the Kurdish civil war in the 1990s and its aftermath. Many people see guns as necessary for self-defense.

“You had a great period of instability, a lack of trust between the two main parties,” Mustafa told Al-Monitor. “Everyone thought the logical thing was to have a weapon. During the civil war, many houses were looted. There was a sense you should have a gun to protect yourself.”

The KRG has tried to curb gun violence before. In 2019, authorities gave gun owners six months to register small arms and hand over heavy weapons, Al-Monitor reported at the time.

Mustafa said bringing gun violence under control is difficult. “The Kurdistan Region has limited resources and is a largely tribal, conservative society with guns,” she said. “It’s a tough situation.”

But she doubted whether security forces can take guns from private citizens who do not turn them over. “You can’t expect the government to go door to door. Bodyguards and political parties have their own guns,” she said.

Aras Masifi, an independent Kurdish blogger, said that the division of power between the Kurdistan Democratic Party (KDP) and the Patriotic Union of Kurdistan (PUK) will hinder gun reform efforts.

The KRG is technically a unified entity. In reality, however, the KDP wields considerable influence in the Erbil and Duhok provinces, while the PUK has more power in the Sulaimaniyah and Halabja provinces. Different divisions of the KRG’s security forces, including the Peshmerga, are historically linked to one of the two major parties.

Masifi said gun control requires a unification of the KRG security forces “so that the people regain trust in the defensive capacity of the Kurdish forces to protect them from future dangers” — as opposed to arming themselves.

Masifi also said that some people “have lost trust in the Kurdish security forces to protect them from dangers and attacks from outside of Kurdistan.” He pointed to the 2014 Sinjar massacre, where the Islamic State killed and enslaved thousands in the ethno-religious Yazidi community. The KRG’s Peshmerga forces and Iraqi federal forces withdrew from the area at the time. Masifi also mentioned the 2017 battle of Kirkuk, when Iraqi forces — backed by Iran — captured the disputed region from the Peshmerga.

The KRG does plan to address guns being held by security services. The new regulations specify that security forces, including Peshmerga and Asayesh, should not bring their guns home after duty. However, the KRG needs time to build more storage centers for them to leave their weapons, according to Merani.

“Some steps take time and money,” he said.

Gun violence is an issue throughout Iraq, not only in the Kurdistan Region. Last month, two people were shot dead in a home north of Baghdad.