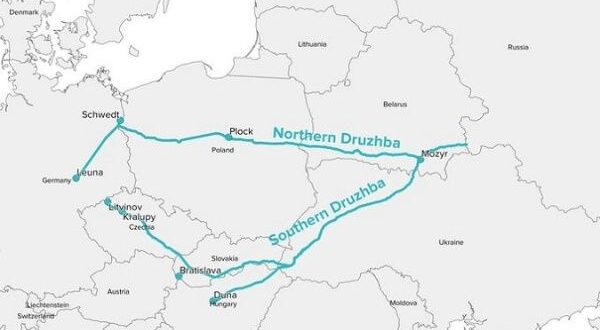 The Ukrainian company acknowledged that it had stopped the transport of Russian oil since August 4 due to “non-payment of the services offered.” Its decision affects the supply of oil to Hungary, the Czech Republic, and Slovakia.

Transneft noted that the contract with UkrTransNafta provides for full prepayment of transit services. The Russian company indicated that on July 22 it paid the amount corresponding to the month of August. That payment, however, was rejected due to sanctions imposed by the West, so the money returned to his account on July 28.

Despite the above, the transit of Russian oil occurs normally through the northern branch of the Druzhba pipeline through Belarus, in the direction of Poland and Germany.

The Russian authorities immediately informed Hungary, the Czech Republic and Slovakia of the mishap and are looking for alternative variants to make the payment. “However, so far the problem of making the payment has not been resolved,” Transneft said.

On Tuesday, the Hungarian oil company MOL also confirmed that the pumping of Russian crude through the Druzhba pipeline has been stopped for a few days.

“Although MOL has enough reserves for several weeks, it is working on a solution and has also started negotiations to take over the obligation to pay the fee,” said the Hungarian company, whose shares fell 5 percent on the Budapest Stock Exchange after of the announcement of the supply cut.