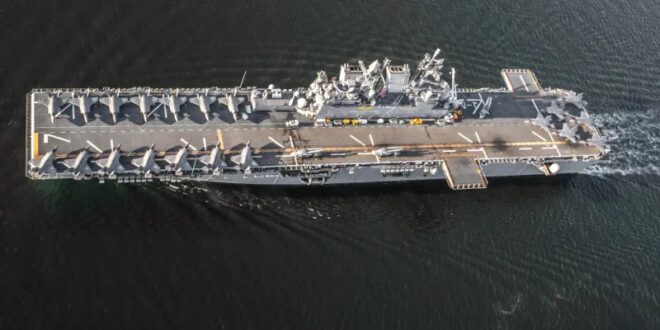 As the USS Tripoli docks in Singapore, while China’s warships remain active near Japan.

The latest amphibious assault ship of the US Navy, the USS Tripoli (LHA-7), recently arrived at the Changi Naval Base in Singapore days after navigating the waters of the South China Sea.

Tripoli is the second America-class amphibious assault vessel built in the mid-2010s and commissioned to service in July 2020. At the height of the brewing tension between the US and China, Tripoli departed Naval Station San Diego en route to the Western Pacific Ocean to embark on her maiden deployment on May 2022. During its voyage, the amphibious assault vessel participated in a “lightning carrier” trial concept with 20 F-35Bs onboard. By April, Tripoli can now operate as a capable vessel, either as a lightning carrier or an amphibious assault platform, with the latter serving only as a contingency option, given that the ship is primarily a dedicated Landing Helicopter Assault (LHA).

“We’re not an aircraft carrier,” said Vaughn, a veteran F/A-18 pilot who was among the first to transition to the F-35B. “We are an LHA that is very uniquely suited to aviation operations—whether that’s an assault or, in this case, a lightning carrier.”

Tripoli successfully transitioned to an amphibious-ready role two years after entering service, launching the 31st Marine Expeditionary Unit at Naval Base Okinawa, Japan, on July 25, after which steered across the South China Sea to make a port call at Singapore’s Changi Naval Base on Wednesday, August 31.

As Tripoli left the Naval Base Okinawa, China’s warships began to appear in sea waters near Japan.

According to a news report, “a Chinese People’s Liberation Army Navy (PLAN) surface action group transited the Tsushima Strait on Tuesday into the Sea of Japan.”

Below is the timeline as reported by the Japan Ministry of Defenses beginning August 28 to 31:

Sunday, August 28 – A PLAN Dongdiao-class intelligence ship traversed southeast through the waters between Okinawa and Miyako Island into the Pacific Ocean to which the Japan Maritime Self-Defense Force (JMSDF) immediately took action in monitoring the activities of the PLAN ships using its destroyer JS Fuyuzuki (DD-118) and a JMSDF P-3C Orion maritime patrol aircraft of Fleet Air Wing 5 operating from Naha Air Base, Okinawa.

Wednesday, August 31 – Japan Ministry of Defense reported seeing a PLAN destroyer CNS Zibo (156) sailing north-northeast of Miyako Island and then southeast through the Miyako Strait into the Pacific Ocean. A JMSDF P-3C Orion MPA from Fleet Air Wing 5 was dispatched to keep an eye on the ship.

While PLAN appeared to be on to something, the activities of these warships near Japan’s waters are actually currently participating in the Russian Vostok 2022 exercise, which will take place over the next few days.

Moreover, the Chinese and Russian navies will conduct anti-ship and anti-submarine defense drills in the Sea of Japan, focusing on strengthening defenses in sea lanes and areas of maritime economic activity and assisting ground forces.

“While the drills are not aimed at a third party and are not related to current events, analysts say they serve as a deterrent against uncertainties such as ill-intended external forces, hegemony, and power politics, and that China and Russia’s military cooperation will contribute to peace and stability in the region,” the report added.

Amid the ongoing invasion of Ukraine, Russia will be sending out tens of thousands of troops to join in the military exercise along with tanks, APCs, artillery, aircraft, warships, boats, and support vessels.

Other countries, including Algeria, India, Belarus, Tajikistan, Mongolia, and more, are expected to be present at the Vostok-2022 maneuvers.

According to a press release from the US 7th Fleet, the exercise was “designed to provide training that emphasizes integrated task group maritime training and maneuver in a challenging exercise environment. It allows the US and its allies to be equipped and ready to respond to crises and contingencies in a changing Indo-Pacific.”

Post Views: 214
Previous The Weakness of Xi Jinping
Next What Iran’s Terrorist Proxies Will Do with Biden’s Concessions and Billions