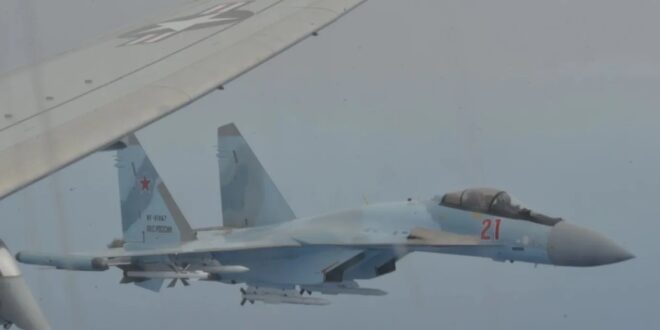 We all have that annoying neighbor bragging about what they are “going to” buy next. In my case, they usually talk about expensive guns, a huge new pickup truck, or maybe a center console boat. But, somehow, the big ticket item just never seems to show up.

Iran is kind of like that BSing neighbor but in the form of a country of 84 million people. They also say they will sell us oil, but that’s a different story for another day. Back to fighter jets…

According to The Times of Israel, Iran is “weighing plans” to purchase multiple Sukhoi Su-35, aka Flanker-E, fighter jets from Russia. At least that is what the commander of the Iranian Air Force, General Hamid Vahedi, has told the Iranian press. As I was reading through the Tehran Times online (I canceled my paper subscription a long time ago), I noticed where Vahedi is quoted as saying the purchase of the jets is “on the agenda” of the Air Force.

General Vahedi concedes that the decision is not his but belongs to the Army and the Armed Forces General Staff Headquarters. Maybe that will give him an “out” when it comes time to save face.

The Times of Israel notes that this announcement by Tehran comes about a week after Russia received Iranian drones to be used in its war against Ukraine. Reportedly, some of these have already broken down. More on that later.

The Turkish publication SavunmaSanayiST reported on Iran’s aspirations two days ago in its online publication. So please take this all with a huge grain of salt. None of this has been verified (to the best of my knowledge). However, that’s not to say this kind of information gathering has no value, quite the opposite. Iran is in the rumor starting business here. They want to flex their muscles in cyberspace without having to spend any actual money. If enough of the kinds of pieces that the Turks are putting out appear on the internet, people are going to believe that Iran is in possession of 2 new squadrons of generation 4+ fighter jets.

Example of a misleading title of an otherwise visually interesting YouTube video. Source: Future Technology of Military (no, that’s not a typo)

On their website, the Turks tell the tale of how the aircraft in question was initially built for delivery to Egypt but was not delivered due to unspecified “performance problems.” They state the aircraft have been on order since March of 2019. Then they go on to postulate that maybe the Egyptians did not want to take delivery of the aircraft due to the US CAATSA sanctions. But…Egypt is not subject to those sanctions, so that statement makes no sense. The 2017 Counter America’s Adversaries Through Sanctions (CAATSA) US laws impose sanctions on Russia, Iran, and North Korea.

The SavunmaSanayiST article also discusses how, allegedly, 30 Iranian pilots went to Russia last year to begin training. The kind of training is not specified. To be fair, some information may be lost in translation here, as Google has translated the site from Turkish to English, but the essence is still there. To quote the article directly,

HESA is the Iranian Aircraft Manufacturing Industrial Company. They manufacture drones and the IRAN-140 turboprop regional commuter aircraft shown below. However, I very seriously doubt they are tooled up and ready to build advanced military fighter jets.

Speaking of the HESA-made drones, on August 29th, Reuters reported that Russia has experienced what they called “numerous failures” with their recent delivery of Iranian-built drones. An anonymous US official told them that Russia had received several Mohajer-6 and Shahed-series drones over the past couple of weeks. The official went on to say this was only the beginning of a plan for the Russians to acquire hundreds of unmanned aerial vehicles in the coming months. He said, “We assess that Russia intends to use these Iranian UAVs, which can conduct air-to-surface attacks, electronic warfare, and targeting, on the battlefield in Ukraine.”

So, there you have it, broken drones and aspirations to buy second-hand aircraft. Unfortunately, it looks like we don’t have too many reasons to be envious of Iran this week.