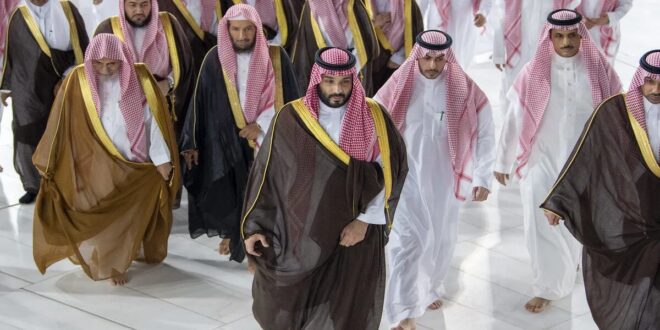 It takes just a few seconds to post a tweet, but for one woman in Saudi Arabia it has resulted in a 45-year prison sentence which has shocked ordinary citizens across the kingdom. Nourah Bint Saeed Al-Qahtani was convicted in the Saudi Specialised Criminal Court on charges of using the internet to violate public order by sending out tweets critical of the regime.

Qahtani’s conviction comes hot on the heels of Salma Al-Shehab’s 34-year sentence which I wrote about earlier this month. I expressed my dismay at the degradation of human rights, especially women’s rights, in Saudi Arabia. Moreover, I have no doubt that these sentences will have been approved by the Crown Prince and de facto ruler of the kingdom, Mohammed Bin Salman.

Having visited Saudi Arabia on several occasions and travelled extensively there, I can tell you with a degree of confidence that such sentences will have been met with outrage by a population that is growing increasingly sick and tired of lazy journalists using these verdicts to demonise all Saudi citizens. Make no mistake, though, this is the direct result of the influence of one man.

Bin Salman revels in the shock headlines around the world because not a single leader is prepared to stand up to him these days. Even the President of the United States, Joe Biden, who once vowed to turn Saudi Arabia into a “pariah state” after the 2018 murder of journalist Jamal Khashoggi, showed that he was prepared to eat his words and indulge the ever petulant prince in front of the world’s media during a recent visit.

Biden, the so-called most powerful man in the world, rolled around the Saudi red carpet like a playful puppy for the prince and his courtiers in Jeddah. It was humiliating and infuriating for American voters to watch, and no doubt many will be lining up in droves to bring back Donald Trump or some other populist in the next presidential election. More pragmatic observers said that Biden was eating humble pie on behalf of all western leaders.

So what has this to do with the sentences dished out to Nourah Bint Saeed Al-Qahtani and Salma Al-Shehab? Bin Salman is clearly thumbing his nose at the Western world because he knows that as long as Saudi oil keeps flowing, he remains all-powerful and untouchable, especially during the war in Ukraine and with Vladimir Putin being a global outcast, meaning that Russian oil is off limits for the duration. The grim truth is that human rights, peace and stability in the Middle East trail way behind the flow of oil on the list of Western priorities.

“Under his [Bin Salman’s] leadership we are being used and caught up in a monolithic hatred of all things Saudi,” a friend of mine in the kingdom has told me on condition of anonymity. “The majority of us are appalled by these prison sentences for critical blogs, tweets and emails and we do not support this extreme form of punishment, but there is nothing we can do.” The prisons are full of Bin Salman’s critics, my friend added, and people are afraid to speak freely on the phone or in emails and certainly not on Twitter. Most Saudi citizens use WhatsApp or Telegram to voice concerns or wait until they can travel overseas.

“Sadly, in the West, the hatred of all Saudis is growing because of the actions of just one man who is revelling in his superiority. Back home, we simply want openness and justice based fairly on the Islamic way including fair trials by jury. What is currently being done in our name as Saudis is not Islamic and we are all being demonised by journalists unable to distinguish between the brutal actions of our ruler and the wishes of the Saudi people.”

Another Saudi who no longer lives and works in the kingdom told me that the people endured twenty years of being targeted and vilified for 9/11 because of the actions of a few, and now it is happening again because of these extreme sentences imposed for blogs and critical columns.

“You can be sure of one thing though, what happened to Al-Qahtani and Al-Shehab had nothing to do with a few tweets. This was a message sent out to the rest of the world. Anything big like this that happens in Saudi is multi-layered, like an onion, and contains many messages for different audiences. Bin Salman was telling the world to stop interfering in Saudi matters, not to lecture us about human rights, and to remember that we can turn the oil off at any point, especially now that Russian oil is off the table because of sanctions.”

Bin Salman might be psychotic, my friend in exile continued, but he’s not stupid. “He knows it’s about leverage and what he can do to maximise that leverage. The results are ugly and horrible and he is playing into all of our fears.”

My Saudi source is afraid to reveal their identity because of possible repercussions back home. And who wouldn’t be?

What the Al-Qahtani and Al-Shehab cases demonstrate to Saudis and the outside world is that Bin Salman will not tolerate any dissent. Those who hoped that Biden’s visit would signal the end of the political crackdown on dissenters will be dismayed by their obscene sentences.

What will the prince do next? It’s a major concern. Clearly, he has grown tired of championing the sort of reforms that enabled women to get behind the wheel and drive cars, and take major roles in the workplace. It is now obvious, though, that he couldn’t care less about political prisoners, human rights or women’s rights, and is not in the least bit bothered about the demonisation of his own people who are held collectively responsible — unjustly so — for the outrageous judgments and sentences being passed in Saudi courts.

Bin Salman is in a position to do so much good in the world: a peaceful and just solution for the people of occupied Palestine, for example; justice for ordinary people suffering at the hands of tyrants across the Middle East and North Africa; even an end to the persecution of his fellow Muslims in India and China. But he won’t. Saudi Arabia’s power and global influence is wasted on him, and he is a waste of space. He prefers to focus on women who criticise his regime.

Those who are close to him should persuade him that his place in history would be assured if he would only operate positively on the world stage, instead of sending young women to prison for decades simply for using social media to say things that he disapproves of. If he really isn’t stupid, as my friend claimed, he will listen.