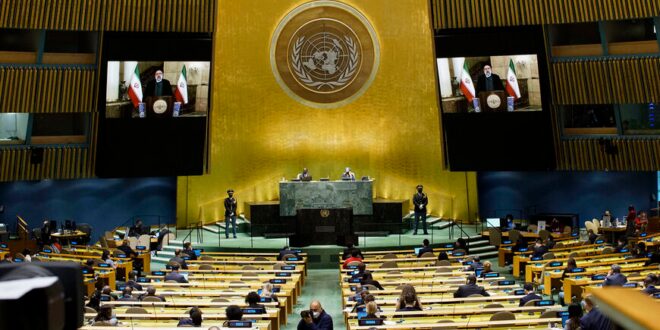 Ahead of UN address, Iran’s Raisi says ‘no trust’ in US on nuclear talks

Iran’s President Ebrahim Raisi has said he would not meet with US President Joe Biden in New York this week.

Iranian President Ebrahim Raisi dismissed the possibility of a meeting with US President Joe Biden during this week’s UN General Assembly summit, where the Iranian leader will address the gathering of world leaders under a cloud of US sanctions and violent protests in Iran.

Raisi takes the podium in New York this week as indirect negotiations between Washington and Tehran aimed at reviving the landmark nuclear deal are stalled, with a deal not expected before the November midterm elections in the United States.

“No,” Raisi said when asked whether he would consider sitting down with Biden. “I don’t think that such a meeting would happen. I don’t believe having a meeting or a talk with him will be beneficial.”

Raisi told CBS’ “60 Minutes” in an interview broadcast Sunday evening, “The new administration in the US, they claim that they are different from the Trump administration. But we haven’t witnessed any changes in reality.”

Both Raisi and Biden are expected to address the General Assembly on Wednesday. The Iranian president is expected to use his turn on the world stage to blame the United States for the breakdown in the nuclear talks and rail against what he calls “tyrannical” sanctions imposed on Iran when former President Donald Trump abandoned the deal in 2018.

Accompanying Raisi in the Iranian delegation are Foreign Minister Hossein Amir-Abdollahian and Ali Bagheri Kani, the country’s chief negotiator in the talks over restoring the Joint Comprehensive Plan of Action (JCPOA).

The Iranian negotiating team refuses to meet directly with US officials and has relied instead on intermediaries throughout more than a year and a half of nuclear talks. On Monday, Foreign Ministry spokesperson Nasser Kanaani kept the door open to nuclear talks on the sidelines of the summit, telling reporters he wouldn’t “rule out the possibility” of such meetings with the non-US signatories to the deal.

The United States and Iran have failed to agree on what the European Union billed as a “final” proposal to revive the JCPOA and earlier this month, the Biden administration described Iran’s latest offer as “not constructive.”

As a condition of its reentry into the deal, Iran has demanded the UN nuclear watchdog, the International Atomic Energy Agency, drop its investigation into several undeclared nuclear sites. Tehran is also seeking guarantees that Washington won’t quit the deal again, even as the Biden administration says it cannot legally bind the hands of a future president.

“We cannot trust the Americans because of the behavior that we have already seen from them,” Raisi told “60 Minutes.” “That is why if there is no guarantee, there is no trust.”

Raisi’s closely watched visit to New York follows pressure from Republican lawmakers who urged Biden to deny the Iranian president a visa, citing his government’s alleged targeting of American citizens and government officials on US soil.

The State Department, however, pointed to its obligations under the 1947 host country agreement, which requires the United States to issue visas “without charge and as promptly as possible” to all foreign officials attending UN events in New York.

Raisi’s arrival comes against the backdrop of violent protests in Iran over the death of Mahsa Amini, a 22-year-old Kurdish woman beaten by morality police enforcing the country’s strict hijab rules in Tehran. At least 30 protesters were reportedly injured in clashes with security forces.

The Trump administration sanctioned Raisi in 2019 for human rights violations related to his participation in a “death commission” that in 1988 oversaw the execution of thousands of Iranian political prisoners.

Raisi told “60 Minutes” the mass executions were “just allegations” before adding, “What happened to them was exactly proportional to what they did.”