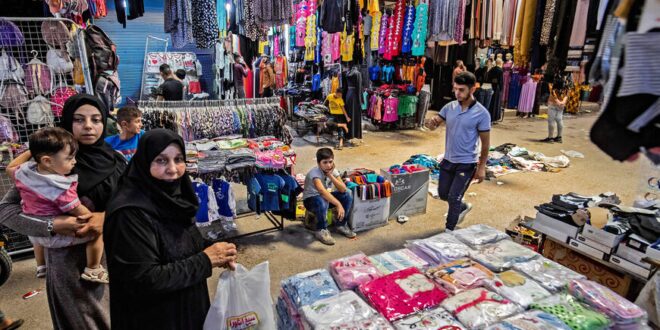 The Syrian Islamic Council close to the Syrian opposition issued a fatwa prohibiting the entry of Iranian goods into opposition areas, claiming Hayat Tahrir al-Sham is allowing the spread of the goods in its areas in northwest Syria.

The Syrian Islamic Council issued Aug. 30 a fatwa on trading in Iranian goods in northern Syria, which, it claims, have swamped the area’s markets.

“It is forbidden to trade in or bring Iranian goods to local markets,” the council said in a statement.

It continued that the fatwa was based on several considerations, most notably the social and economic risks resulting from opening the local markets in the liberated areas, in reference to the areas under the control of the Syrian opposition, to Iranian goods, “which only serves to strengthen our enemies and alleviate Iran’s economic siege, all the way to accepting normalization with it.”

Parties in the Syrian opposition that are based in Turkey often accuse Hayat Tahrir al-Sham (HTS) of allowing Iranian goods into the opposition-held areas in northern Syria through the Bab al-Hawa border crossing with Turkey.

A leader in the Free Syrian Army (FSA) told Al-Monitor on condition of anonymity, “HTS is only lured by profit and taxes and does not care about Iran’s position in the war, which is against us. It does not care that Iran is the enemy that we must fight at all levels.”

He said, “For HTS, it is always about money and not principle. The movement is spreading Iranian goods in Idlib, and from there they are being distributed to the FSA-held area. There is nothing we can do about it.”

The source explained, “Meanwhile, HTS searches cars coming from FSA areas to Idlib, and does not allow any goods from FSA traders — even if they were Iranian-made — to enter.”

Humam al-Issa, a journalist based in Idlib, believes that the Syrian Islamic Council, as well as the FSA factions, are exaggerating the issue about the presence of Iranian goods inside Idlib because of their animosity toward HTS.

“Unlike what is being claimed by HTS’ opponents, Iranian goods on local markets are limited. They include dates and sometimes medicine and infant formula,” he told Al-Monitor.

“The Syrian Islamic Council has issued fatwas against HTS according to the dictations of some of its members that are close to the FSA and at odds with HTS, such as the Levant Front [al-Jabh al-Shamiya] and Jaish al-Islam,” Issa said.

The Syrian Islamic Council was established in Istanbul in April 2014. It serves as a Sunni religious authority in the Syrian opposition-held areas and includes Sunni clerics who were previously members of the opposition factions and continue to support the FSA and its factions.

Issa stressed that there is no popular anger in Idlib over the alleged spread of Iranian goods, as the council claims, because Iranian goods there are limited, and Idlib mainly relies on Turkish goods.

Mulham al-Ahmad, director of media relations in the HTS-affiliated Salvation Government who is based in Idlib, told Al-Monitor, “Regarding the Syrian Islamic Council’s fatwa, it concerns the [Syrian opposition-affiliated] Interim Government areas.”

He noted, “When it comes to the Salvation Government areas, there is an old decision [by HTS] that prohibits the import of Iranian goods into Idlib.”

According to a media source from Idlib who spoke to Al-Monitor, “The most widespread Iranian goods in the area include ceramics, granite, cement and other building materials. In addition to some foodstuff such as dates, infant formula, oils, legumes, vegetable oil, children’s items such as biscuits, appetizers, as well as clothing and shoes.”

At the end of 2017, the Salvation Government banned HTS’ civilian wing in Idlib and the countryside of Aleppo from importing Russian and Iranian goods.

Mahmoud Ammar, a pharmacist in Idlib, told Al-Monitor, “Previously, we sold Iranian infant formula and medicine, but not anymore. Buyers usually refuse to buy Iranian-made products even if you offer them for free. People say Iranian-made baby formula is spoiled and made to harm children [in Syria].”

Muhammad Salim, a grocery owner in Deir Hassan in Idlib countryside, told Al-Monitor, “I do not sell Iranian goods because I hate Iran, which fought us and abandoned us. Even if these goods are of the best quality I don’t buy or sell them. People just avoid them.”

Muhammad Salem, a journalist in Idlib who is close to HTS, told Al-Monitor, “The Syrian Islamic Council is hostile toward HTS and therefore it is issuing fatwas against it, not out of religion or concern for the people.”

“We don’t see this council issuing fatwas against FSA’s dealing with the Syrian regime and the SDF through the smuggling crossings,” he added.

In this context, some see that the basis in these fatwas is ideological. The Syrian Islamic Council is an opponent of HTS’ approach. This is not to mention the conflict between the two sides and the fact that the council has a broad segment affiliated with the Muslim Brotherhood and factions hostile to HTS.

Others believe that the presence of Iranian goods in the markets is not a major issue. They say that in wars, trade may not be considered as enmity, arguing that many countries that were at war still had products from each other, as is the case in the Russian war on Ukraine currently and the Iran-Iraq War in the 1980s.