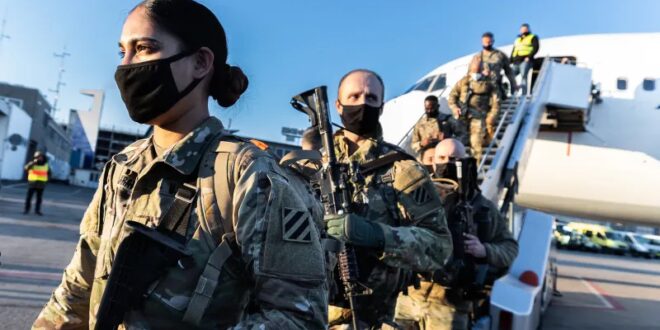 China-Taiwan: Biden Ready to Bring Our Troops In, While Taiwanese Generals Warn Their Military is ‘Definitely Not Ready’

China is still circling Taiwan, conducting daily military exercises, months after US House Speaker Nancy Pelosi visited the country. Now that tensions are rising, with various diplomatic conversations between the US and China happening, Biden says he’s ready to deploy US troops if and when the need arises.

In an interview with CBS, US President Joe Biden said that the US is ready to support Taiwan if China attacks.

However, this was immediately overturned by the White House, clarifying that the US remains neutral when it comes to the China-Taiwan pledge. Furthermore, the White House said they are maintaining the US policy of no military commitment with Taiwan.

But, even with the White House “clarifying” Biden’s seemingly impulsive remarks, we could not remove the fact that this was said outrightly by the head of state. So, Beijing reacted with a firm statement saying they “deplore[s] and firmly oppose[s]” Biden’s remarks. The Chinese foreign minister also added that they “logged stern representations” with Washington after Biden’s CBS 60 Minutes interview, according to BBC.

Earlier this month, the US agreed to sell $1.1 billion worth of weaponry to Taiwan while claiming the US stands with the One China Policy. This is also where Biden redirected this interview by saying the US is not forcing Taiwan to do anything.

“There’s a One China policy and Taiwan makes their own judgements on their independence. We are not moving, not encouraging their being independent – that’s their decision,” Biden said.

As for Taiwan, they took Biden’s remarks positively. Taipei released a statement in support of the United States, welcoming the “US government’s rock-solid security commitment to Taiwan.” Taipei also said they would continue to build a “close security partnership” with Washington.
US-Taiwan, Not As Dandy As You Think

Meanwhile, it was revealed last week that US and Taiwan are grappling with diverging policy differences around China. As US and Taiwanese officials take steps to “deepen their security and economic ties,” it has been made clear that there are differences in opinions when it comes to tackling China.

One of the biggest items for discussion is the acquisition of weaponry. For Taipei, they prefer more expensive long-range weapon platforms like the F-16 fighter jets. There were no mentions of high-grade rocket launchers like HIMARS yet, but they are looking for weapons that would be ideal for deterring Chinese gray zone incursions.

“We still need the big-ticket items like the fighter jets just to defend our gray zones,” said Shu Hsiao-huang, an associate research fellow with the Taiwanese government-funded Institute for National Defense and Security Research think tank, arguing the hundreds of incursions by Chinese jets into Taiwan’s air defense identification zone this year constitute psychological warfare against the Taiwanese military and society. “If we don’t try to deter the [Chinese People’s Liberation Army], they will gradually come closer and closer and then their drills will become normalized.”

On the other hand, what the Biden administration wants is for Taiwan to prioritize the acquisition of less expensive, short-range “asymmetrical weapons” that would “more likely to survive the initial wave of a Chinese invasion but still able to inflict high casualty numbers on an invading force,” according to Roll Call.

However, the answer could also rely on when they expect an all-out confrontation.
China Irate Over $1.1B US Arms Sale to Taiwan, Japan Sends Support to Remote Islands

“Washington thinks that PLA will attack in 2027, so Taiwan needs to prepare for war, but most Taiwanese experts don’t think the PLA will be ready to attack in 2027. They think it will happen after 2030,” said Chieh Chung, a defense analyst with the National Policy Foundation, a think tank aligned with the opposition Kuomintang party.

Moreover, besides the initial acquisition strategy, former Taiwanese generals are speaking out to raise the issue of existing troops’ availability and preparedness. Former Taiwanese Air Force Lt. Gen Chang Yang-ting said in an interview that he does not believe Taiwan could fend off Chinese forces the way Ukrainians are pushing Russians out.

“We’re not prepared enough. We’re good at boasting how prepared we are, but we’re actually not. For the Ukrainians, we can’t compare to their patriotism and their willingness to protect their country,” said Chang, who was the deputy commander of the Air Force before he retired two years ago. “The government’s misleading Washington,” he said, referring to the government of Taiwanese President Tsai Ing-wen. “We’re definitely not ready, especially in terms of military morale.”

Post Views: 71
Previous Why the World Economic Forum’s Plutocracy Should Be Dissolved
Next Ukraine Is Asking For More Powerful Weapons: This Is Why We Are Hesitating