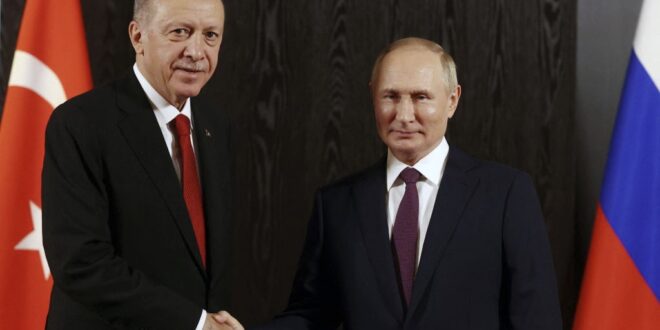 Turkey is once again blackmailing the U.S. that “it would further deepen its defense cooperation with Russia if Congress blocks its request to buy 40 F-16 Block 70 fighter jets from the U.S.”

“Europe Should Be Grateful to Erdoğan”: The quote is the praise Russian dictator Vladimir Putin bestowed upon Turkey’s Islamist strongman Recep Tayyip Erdoğan. Translated into realpolitik, what Putin is saying is: “Russia is grateful to Erdoğan’s anti-Western ideology.” He is right. Erdoğan is bringing NATO member Turkey more and more into Russia’s orbit.

Erdoğan is overtly challenging the alliance of which his country is a member. Here is a brief account of how Erdoğan steered Turkey further away from Western interests, in favor of his Eurasian adventurism, in just a couple of months:

Turkey had earlier been expelled from the U.S.-led, multinational partnership that builds the F-35 fifth-generation fighter jet, and been taken under the scope of the Countering America’s Adversaries Through Sanctions Act.

The Russians are talking about a second S-400 contract, but this may not exactly be what is taking place. The original contract involves two systems. There is no need for a second agreement for a second system. But the Russians would not be entirely fabricating fake news. The original S-400 contract, at $2.5 billion, involves the Turkish acquisition of two systems. Turkey has so far received the first system but has abstained from activating it, fearing further U.S. sanctions. The second system has not been delivered yet. The TASS agency is reporting it as if it is a new deal but sources are telling this correspondent that the new deal is about the localization of some parts production for the second system.

A senior defense procurement official also told Gatestone that “there is progress in talks for the localization of the second system.” That is new news. It also has propaganda mission. Russians are happy to create a new crack, via Turkey, within the NATO alliance. And Turkey is once again blackmailing the U.S. that “it would further deepen its defense cooperation with Russia if Congress blocks its request to buy 40 F-16 Block 70 fighter jets from the U.S.”

This plan might make sense to Russia and Turkey, but it does not to the Western civilization to which Erdoğan claims Turkey belongs. To put it simply, more and more Erdoğan’s Islamist Turkey simply does not belong where Erdoğan claims it belongs.

When will the West, please, wake up to this shift?