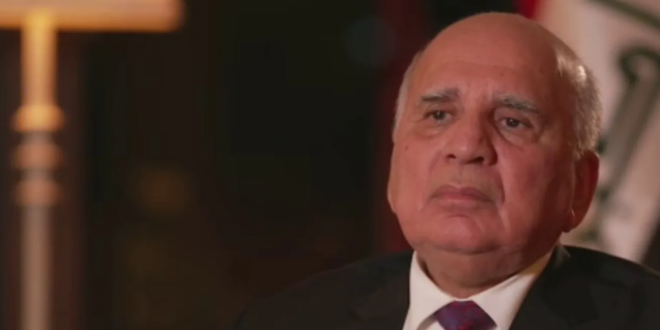 EXCLUSIVE: The Iraqi foreign minister urged Western countries to continue chasing the remnants of ISIS until the organization is completely eliminated because it presents a threat to humanity.

“We must take it seriously because, when they started, they were also small. But once they became part of the problem, not only that they have got weapons in their hands, but this has to do with an ideology as ISIS has to do with their culture, with ideas,” Iraq’s Foreign Minister Fuad Hussein told Fox News Digital in an exclusive interview on the sidelines of the United Nations General Assembly.

“So we must fight ISIS … not only fighting ISIS on military field or by military means,” Hussein added. “We need different kinds of education so the fight against ISIS as an ideology is not yet there. And we need to do more.

“We need different platforms talking about this ideology, because, at the end, it is a threat for humanity.”

The U.S. and its allies declared a military victory over ISIS and an end to the caliphate in 2019 after destroying the last stronghold in the Syrian village of Baghouz. The Syrian Democratic Forces (SDF), which cooperates with the U.S. military, led the effort on the ground.

But remnants of ISIS continued to operate in rural Iraq and Syria. Operatives have focused recruiting efforts on the al-Hol refugee camp, the largest such camp in Syria, which U.S. Central Command chief Gen. Michael “Erik” Kurilla warned was a “breeding ground” for future ISIS operatives.

Hussein shared Kurilla’s concerns, saying that the camp threatened multiple countries in the region. Worse, he argued that if the camp is not contained, it would lead to operatives acting freely inside Syria again.

But Hussein said his country could continue to look to the U.S., applauding the relationship between the two countries despite “some issues, some problems during some periods.”

“I think the relationship has changed from being there with … [the] American army now to a more healthy relationship,” Hussein said. “And the Americans can support Iraq in various way, especially building the Iraqi economy, so America can play an important role inside Iraq.”

Hussein said tensions in his country spiked during the Trump administration after Trump pulled out of the Joint Comprehensive Plan of Action (JCPOA), and that the Biden administration’s efforts to resurrect a nuclear deal presented “a favorable development.”

But America isn’t the only country with whom Iraq has worked to build partnerships. Iraq’s geopolitical position requires it to play nice with its neighbors and foreign interests, meaning the country has to strike deals with China and Iran. China recently increased investment in Iraq through a construction-for-oil deal.

“Iraq needs an Iraqi economy and Iraqi infrastructure, [we] need, rebuilding [and] restructuring and China — or Chinese companies — can play a role in that case,” Hussein said. “But it is not, as it has been said, that we are depending heavily on that deal. Actually, for a long time, we didn’t start translating the deal into reality.

“Iran is our neighbor, and we deal with Iran as a friendly country, and that doesn’t mean we don’t have here and there some problems,” he explained. “However, we are trying to deal with these problems through dialogue with them.”

Part of Hussein’s concern lies in the political difficulties still gripping the country: Elections held in October 2021 resulted in the need for a coalition government. Iraq still has not formed a government and elected a prime minister in that time.

The situation grew more severe in August when cleric Moqtada al-Sadr announced his resignation from politics following the prolonged deadlock in government. His announcement sparked a protest that led to his supporters storming the government palace.

Hussein said that al-Sadr is a “respectable leader” who has “good support in Iraqi society.”

“He has got his own policies on position. So that has to do with him. But he deserves a lot of respect from outside,” Hussein said.

“We are all committed to a democratic process,” Hussein insisted. “It is about a year ago actually we had our election, and it is unfortunate that the political parties, because of the conflict among them, they couldn’t reach an agreement to form a new government.”

Post Views: 38
Previous The Rise of the Rest: How Russia Views the Future World Order
Next Ukraine War: Still a Cuban Missile Crisis in Slow Motion